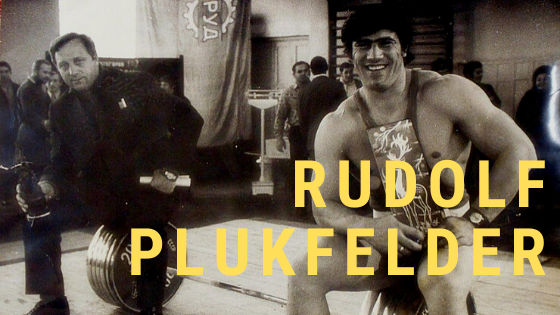 Rudolf Plukfelder taught himself the science of weightlifting and worked his way up from the mines of Siberia to the lifting platform and to world’s records! by DMITRI IVANOV

SIBERIAN WINTERS ARE INCREDIBLY COLD! Outside the temperature drops to 60 below zero but it’s nice and warm down in a coal-mine. That’s why Rudolf Plukfelder became a coal miner.

Rudy became a “fitter”; one who loads coal onto the trucks after it has been “hewed”. It’s a tough, hard, back breaking job for 7 hours a day and one would hardly expect a man doing such work to have time for weightlifting. One day Rudi found a rusty old barbell in a tool shed.

He had heard plenty about weight lifters. They were big heroes in the Soviet back in 1948. Hadn’t the Russians almost (well, they won one class) beaten the Americans in London with the first team they ever sent to the Olympic Games?

He had read in the sports section of the papers all about the great Novak, first athlete to ever win the title – “Master of Sport” and first Russian to ever win an Olympic title. He read all about big Ambartsumyian, first Russian heavyweight to set a world’s record and of the phenomenal featherweight Popov who also set a world’s record. Yes, weightlifters were heroes even way out in Siberia.

When Plukfelder found that rusty old barbell he decided that he was on his way to becoming another weightlifting champion – or so he thought. He thought that all there was to weightlifting was to bend down, grip the bar, strain your muscles and heave! (Rudia had the muscles – all coal miners have muscles.) Rudi tried it; it wasn’t quite that easy.

Most men would give up trying to be a weightlifter after a few unsuccessful attempts to raise the barbell shoulder high but not Rudi. He determined to master the barbell and one of Rudi’s most admirable traits is that he is a man of determination but he needed someone to teach him the rudiments of lifting.

IN THE TOWN OF KISELEVSK, SIBERIA, there was no gym; no trainer; no other lifters. Rudolf Plukfelder found a textbook on weightlifting and spent the evenings studying the ABCs of the Iron Game.

Rudi did not become a world’s champion overnight, far from it. It took him ten years of long, and arduous trial and error method. In spite of the hard work in the mine Rudi discovered that he could be a “bear for punishment” – he could train every night in the week.

Besides having determination, Rudi had an analytical mind. He could solve lifting problems for himself. Though denied the training that men like Vlasov and Stogov had, he finally attracted the attention of the experts but it wasn’t because he was lifting record breaking poundages; it was because of the excellence of his lifting style.

They wondered and wanted to know how a self taught coal miner would achieve such style – a style they had been trying to instill in every lifter in Russia! Rudi’s fast, wide split with the knee well forward of the front foot was the nearest thing to the lifting perfection they had been seeking! Ten years may be a long time for an athlete to await recognition but there is a good reason why it took Plukfelder that long to reach the top.

RUDI ACHIEVED SOME LOCAL SUCCESS soon after he embarked on his weightlifting career. Men who work with their muscles admire strength. Other miners wanted to take up weightlifting. Rudi started the Kiselvesk Weightlifting Club. He spent as much time teaching others as he spent in training himself! In his own words;

“I would never have achieved anything worthwhile in weightlifting had it not been my desire to help my comrades. This work gave me fresh ideas, made me more observant, spurred me on to seek new and shorter ways of building up strength.”

Rudi set a splendid example for others to follow. He neither drinks or smokes. He maintains regular hours. He is a devoted family man.

That his methods of training have been successful is best evidenced by the present caliber of his club’s lifters. There is Alexi Vakhonin, a featherweight who has totalled 727 1/2. This total may seem low when compared to Minaev’s or Stogov’s but Vakhonin is not a good presser yet he holds the Soviet record in the Clean and Jerk with a mark of 294 1/4 pounds! Vakhonin, like Rudi, is a “fitter” in the mine. Gennady Matveichuk, a “hewer” (he cuts the coal from the seams) is a tall, broad-shouldered middleweight who has totalled 927!

Last October Plukfelder’s team beat the Moscow Trade Union Team, a team which included the great Medvedev, twice world’s heavyweight champion. The manner in which the Kiselevsk team won earned Plukfelder praise from the highest officials not only for being a brilliant coach and captain. They admired him not only for the personal example he set but for being an exceptionally industrious man and a man who had introduced the best quality of the working man in sport. They admired Rudi for doing everything thoroughly and solidly.

RUDI IS CONSIDERED THE “PERFECT LIFTER”. He uses the wide, split style. His footgear consists of heeless sneakers with no ankle support; something other Soviet lifters consider suicidal.

When he lifts a weight the weight is controlled throughout the entire lift. His legs move in perfect precision; there is no staggering. His third attempt on any lift looks exactly like his first; there is no pressout although he may split a trifle lower, the lift is always perfect.

His timing in the overhead jerk is perfect. He seems to shoot the bar aloft with effortless ease and again, there is no struggling to stand erect or fighting the barbell with a press-out to hold it overhead. When it goes to arm’s length it stays there.

The experts who have seen Rudi lift proclaim him the best lifter in the world and that may well be. His world record snatch of 310 1/2 pounds performed at a bodyweight of 180 3/4 was made in faultless style. He is not just a terrific snatcher; he is good on “all three”. He is a formidable presser having pressed 308 3/4 pounds at a bodyweight of 179 1/2! He was the first light-heavy weight to break the 1,000 pound total barrier.

Rudi creates a favorable impression whenever and wherever he lifts. He is neat, always well groomed and he carries himself well. His physique would be classified as on the tall side yet he has incredible musculature. The muscular separation he shows when he hoists a weight overhead is fantastic.

When Rudi started weightlifting the workday was 7 hours. It has now been shortened to 6 and he is – now a section foreman.

He now works out four times a week. At each training session he first limbers up by doing some running, high-jumping and acrobatics. He begins his actual lifting by doing a number of Power Snatches using alternately the half-squat and a short split movement. He then does a number of up right rowing motions – the exercise that has given him the tremendous pull that he had. He concentrates on each movement, seldom talking to anyone.

He then performs about 20 Presses; 20 Snatches and 20 Clean and Jerks. He does 2 repetitions with each poundage he handles. He always includes 5 auxiliary strength building exercises in each training session. His favorite exercises being the Squat and the Leg Press. It is his contention that the Leg Press aids the lower spinal muscles, the muscles which are so important to a lifter.

Rudi develops his second pull by snatching and cleaning weights with the barbell placed on boxes. He develops his initial pull with a very severe exercise; he Power Cleans and snatches weight while standing on a box! This places the bar almost as low as his feet.

He devotes much time to building up the strength of his arms. He does his presses with both wide and shoulderwidth grip thus getting an all-around development on his deltoids. He does his Bench Presses the same way; with both wide and narrow grip. He always does some barbell presses while lying on the Inclined Board. He does his parallel bar dips wearing a pair of Iron Boots. On this exercise he does several sets of 8 reps. His attributes his great pressing power to his exercise.

On the days he does not train with the weights he does road work – something the American lifters do not do. All the Russian lifting champions have found that road work is essential to lifting.

THE CONSISTANT HIGH CALIBER of Plukfelder’s lifting is shown by his total of 1003 1/2 at the Soviet Olympic Tryouts held last June in Leningrad. He had been ill before the match and was not conceded a chance to make the team but as usual his lifting was flawless.

Fate was not kind to Rudi at the Olympic Games in Rome. He sustained a severe back injury in training and was forced to sit on the side-lines and watch Palinski of Poland take the Olympic laurel wreath with an insignificant total of 975 1/2 – a total Rudi would have made on his first attempts! Injuries do not last forever and although Rudi was denied an Olympic title there is the World’s Championships in Vienna this fall. What the “Perfect Lifter” will do there is hard to say but this three best lifts now total 1,041!”