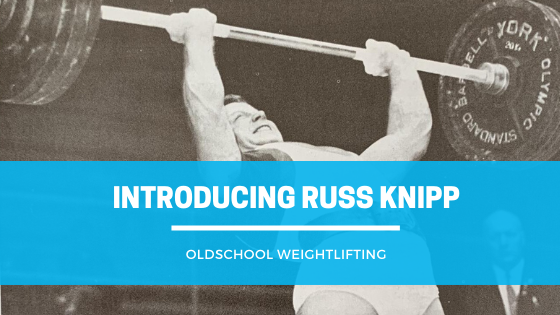 Russell “Russ” Knipp was an American weightlifter, born in 1942 in Pittsburgh, Pennsylvania. He served in the U. S. Army. The following article was written by Ed Nowosielski – Mr. Berg

“The Boys’ Club of Pittsburgh has a young man who is making a name for himself when it comes to weightlifting.

This personable youth is Russel Knipp, a resident of the Brookline section of Pennsylvania’s second largest metropolis.

Russ has been lifting in competition for nearly two years as a member of the Boys’ Club team. As his coach and friend for these two years I’ve come to know Russ well and to respect his zeal and determination to excel in weightlifting.

Just 20 years of age, young Knipp is a graduate of South Hills High School. It is no surprise that he has turned out to be a weightlifter, for weightlifting runs in the Knipp family. Russ’ dad, Robert P. Knipp, Jr., is himself a lifter, bodybuilder, and active iron game official. His enthusiasm has been a constant source of encouragement to Russ. Another son, Don, lifts as a middleweight on the Boys’ Club team.

Although he is below average height, thanks to weight training Russ Knipp has developed into a strong young man. His powerful physique bespeaks the tremendous power he displays in training and competition. Coupled with excellent coordination and extraordinary speed, this factor has convinced us that he has the potential of becoming a topflight international lifting star.

In high school Russ loved gymnastics and hand balancing. Notwithstanding his diminutive stature, he successfully participated in football, track and field events, volleyball and swimming. these activities, in addition to providing wholesome recreational pleasure, helped to condition his strong young body for the sport in which he is making his mark.

Few lifters begin their lifting careers with a performance as good as Russ Knipp’s debut on the platform. He scored 560 pounds as a featherweight with a press of 190 pounds, stanch of 160, and a 210 pound clean and jerk. His total zoomed upward, and before abdicating the featherweight ranks last year his total was up to 730 pounds. Shortly before his twentieth birthday Russ established a Junior World record featherweight press of 256 3/4 pounds. This lift (actual weight 257 1/2), and his 280 clean and jerk and 710 total are still the United Sates Teen-Age National records in the 132-pound class.

Speaking of records, we feel that Russ will establish many more before his career is over. Obviously he excels in the standing press. His national lightweight record of 283 3/4 was made easily. The night he made this record he lifted as an extra lifter in the evening session because he could not get off from work in time to compete with the lightweights that afternoon. in spite of working a full day, his lifts went well. Russ started with 250, easy as pie. Next he asked for 265, and that also went up with no real strain. The big record was next, a real feather in the cap of our young Boys’ Club athlete.

Despite his national and international records, Russ has yet to win a national title. Poor decisions on starting poundage’s have cost him dearly. He should have set three new Junior National records last year; his first press attempt was many pounds above the current record, but he missed the lift three times, and that was that. This year he is bound and determined to win the Junior title, and the odds are that he will establish at least two records along the route, including, we hope, an improvement over Tommy Kono’s long standing total record of 815 pounds.

Now that he has acquired Tony Garcy’s national press record, Russ has as his goal a spot on the 1964 United States Olympic team. He realizes that he has his work cut out for him, that he must bring his snatch and jerk up on a par with his pressing and cleaning ability. His split style snatch is excellent, and he has great pulling power. Eventually we feel that his snatch will be right up with the best. Cleaning has always been easy for him. He has cleaned 325 officially, 330 in training, but so far he does not been able to hold the jerk.

Sooner or later this weakness will be overcome, and when it is look for a spurt in his total!

One factor which has both helped and hindered our Boys’ Club record breaker is his employment. Russ makes his living working as a chef’s helper at the Park Schenely Swank restaurant in the heart of the Oakland cultural and business center in Pittsburgh. Since he is able to take his meals thee, he has the best in food at all times, and all he wants of it. But the way he trains, he needs this kind of nutrition. On the other hand, his supervisors frown on his taking time off the job to compete in out of town meets.

He has had to pass up all the big open meets this past season in order to be assured that he will be able to have a few Saturdays off to compete in the national championships in June.

We see Russ in the Boys’ Club gym three times a week, and on top of that he trains at home in his basement gym three times a week. At the club he usually spends four hours in a training session, working mostly on form and speed. At home his routines takes about an hour less and is concentrated on building power, particularly using his power rack. His complete routine follows:

Precontest Routine
Three weeks before a contest Russ switches to this schedule: