Schwarzenegger – A Collector Of Magazines 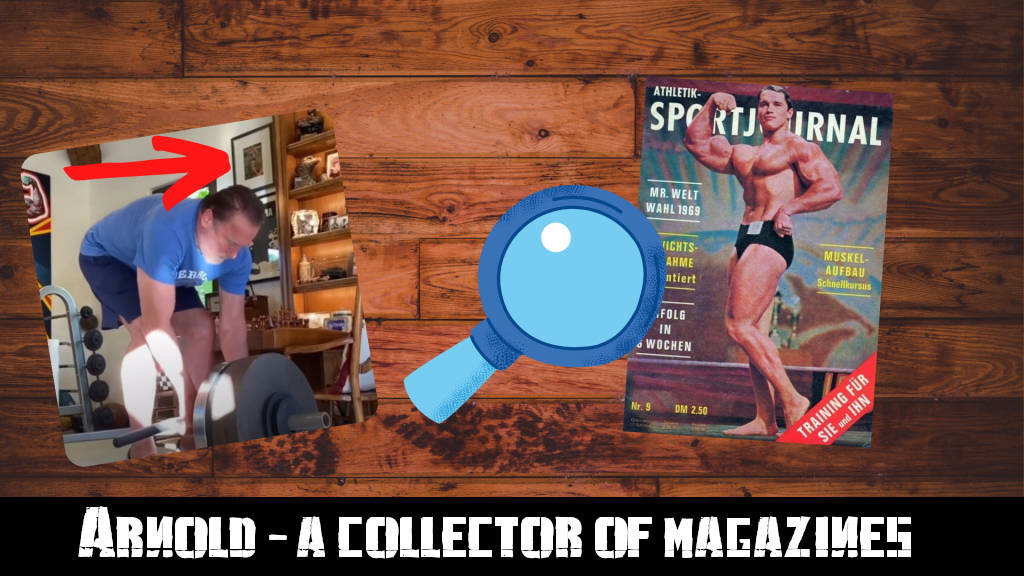 Yes, even Schwarzenegger collects old muscle magazines. If you search for “Arnold T-Bar Rowing” on YouTube, then you’ll find him lifting huge weights in his office. Behind Schwarzenegger, there’s a great black-and-white advertisement for the Mr. Olympia competition. If you look carefully, then further back, you’ll see a colourful A4 Picture.

If you zoom in, then you’ll see that it’s a bodybuilding magazine with a great cover-shot of Arnold, presenting his world-famous biceps pose.

Iron Man, Muscular Development, Strength & Health, and other magazines printed beautiful covers with Schwarzenegger, but the magazine in the video is not from America or England; it’s from Germany, and the magazine is entitled, Athletik Sport Journal. The magazine was managed by two Germans named Benno Dahmen and Peter Fasching. Both supported Schwarzenegger financially, while he was living and competing in Germany.

Recently, I bought a package of old magazines from Austria. All I knew was that it would have some old magazines from the ‘60s and ‘70s. So, I opened the package, not knowing what was inside, and the content surprised me; I really felt like a kid at Christmas!

To make a long story short, I am fortunate enough to own that one rare magazine now. I am proud to hold this piece of German culture in my hands and even prouder to share it with you on my website!

The package even included Issue #2, which is Arnold’s first back cover. Arnold’s first front cover is Issue #6. Luckily, that magazine is in excellent condition; nothing is missing. The spine is a little bit worn, but everything else is fine.

I cannot say about same thing about Issue #9, which is the one that Arnold owns. The condition of the cover and spine is great, but five pages are missing. However, those five pages are on the topics of skiing and losing weight, so it’s not a big loss for me.

What makes Issue #9 so special?

I analyzed Issue #9’s table of contents and wondered why Arnold chose to display this issue. The front cover was photographed by Jim Larsen, a photographer from the USA. 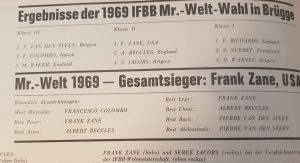 The magazine provides great, rare, and exclusive pictures of Frank Richards, Frank Zane, and Albert Beckless. German photographer Benno Dahmen took all pictures. Again, I wondered what makes this issue so special. It only has competitions and fitness tips in it.

Then I analyzed it carefully and found a “Letters to the Editor” section, which has a letter from Arnold’s father, Gustav. I collect and read a lot of old German and American magazines, but this was the first time that I ever read something penned by Gustav Schwarzenegger.

I think this is the reason Arnold chose to display this issue; it’s the only muscle magazine that has a weightlifting-related note by his father.

Thank you very much for sending us the 25 trophies from our son, Arnold, which, without suffering any damage, arrived well with us. However, it was quite difficult to explain to the Austrian customs authorities that the large number was not trade goods, but special awards from the various international championships.

In my opinion, you must now be glad that the 1969 event is now over.

I must honestly confess that the European Championship organized by you in the hall of the city of Essen left a great impression on me.

I have attended numerous other events of the iron sport, but of these, none can compare in organization and execution with the Essen European Championships 1969.

You and Mr. Dahmen have done a masterful job. Every competitor will certainly confirm this without envy.

You are sincerely greeted by Gustav Schwarzenegger from Weiz, Austria”