Schwarzenegger Was Forced To Take Steroids 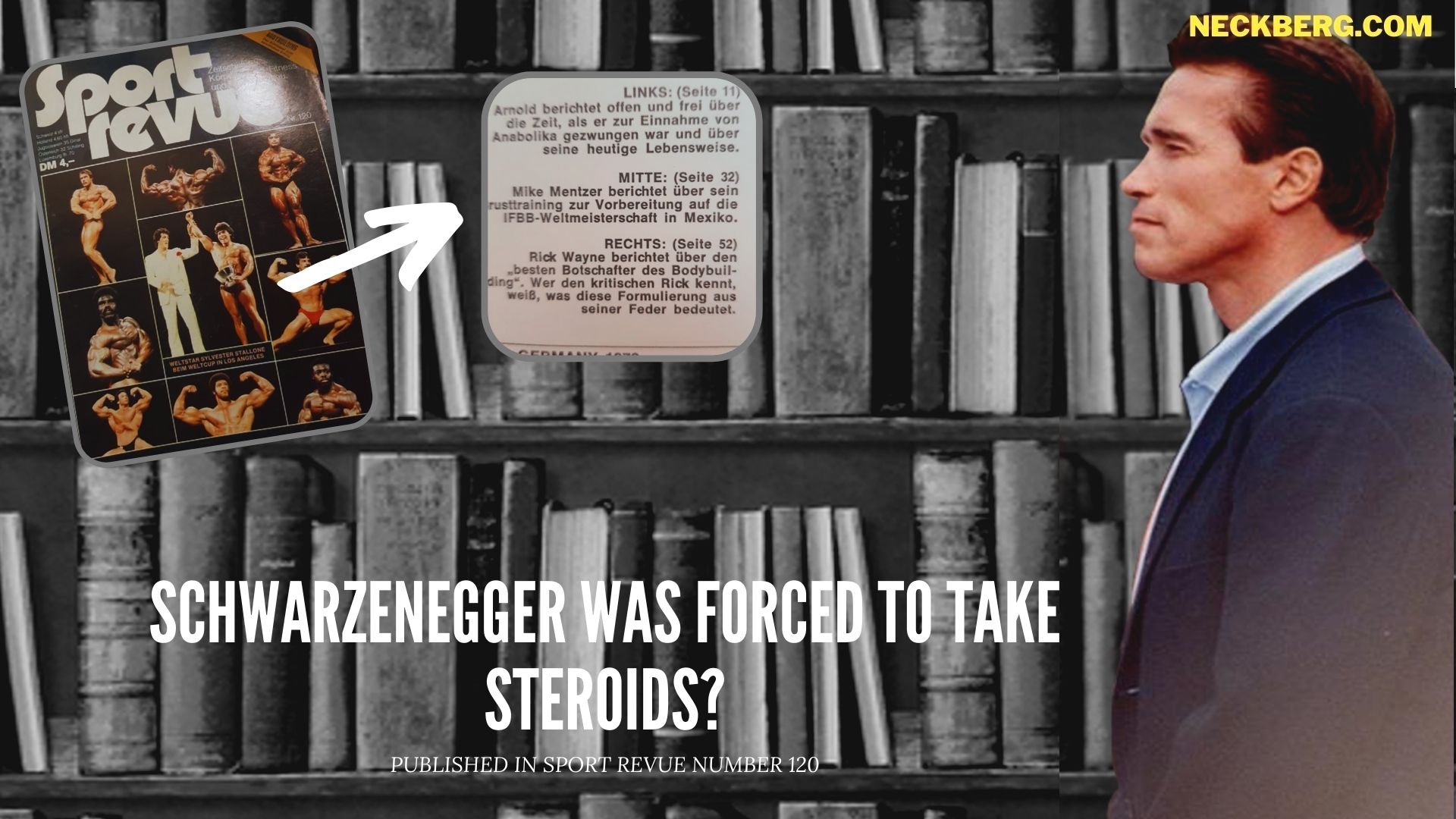 Currently, I am reading an old and historical magazine published by Albert Busek, a long-time friend of Arnold. That magazine consists of insightful and private content about Schwarzenegger’s thoughts, training and diet.

Furthermore, it contains rare snapshots of Schwarzenegger, one of which shows him at Oktoberfest with bodybuilding legends Franco Columbo and Ed Corney, smiling and drinking munich breweries together.

The table of content reveals that Schwarzenegger was “forced to take steroids” and that he started using them in 1968.

Schwarzenegger: “from 1968 till 1975 I took steroids once a year, before a competition.”

Schwarzenegger warns against risks and says anyone who uses steroids just to gain weight and to look good on the beach is stupid.

Schwarzenegger: “Willpower, physical disposition and nutrition – seem more important to me than steroids.

Steroids may give the final touch, the final 5%!”

As every hard-core Arnold Schwarzenegger fan knows, before conquering the world of bodybuilding, he made a name for himself being an inhumanly strong weightlifter in Austria and throughout Europe in the early 60s!

So, I did some research, and found an old interview with an Austrian weightlifter and friend of Arnold, named Harald Maurer. (1)

He said: “At that time, there was not yet the multitude of ‘supplements’ that today are swallowed or injected by athletes. DIANABOL had just come on the market (today the same active ingredient is in NEROBOL, THAI-METAS or NAPOSIM) and Arnold did not deny that he had also taken them (quote: “I would also have eaten shit if that would have produced muscles …”).

At the sports doctor’s we had an injection of ‘ANADUR’ once a week (today the active ingredient is known as NANDROLONE or DECA DURABOLIN). They contained the ridiculously low weekly dose of 50 mg – nowadays athletes give themselves the same active ingredient several times a week at 250 mg.

These are quite different calibers than the tiny doses we supplemented with power drinks made from dry skim milk and large quantities of cod fillets. Protein supplements were also not yet available and the strong anabolic steroids in use today (e.g. OMNADREN, SUSTANON, WINSTROL etc.) were still completely unknown.

Compared to the present time, our use of anabolic steroids could be described as very minor – no bodybuilder today would expect success from the ridiculous amounts. In our case, they are also likely to have had more of a placebo effect.

That a body like Arnold later presented to the world (and in my eyes he was the BEST who ever posed on a stage!) could be developed so completely without chemistry, may only be believed by someone who has no idea about bodybulding”

Schwarzenegger stated he started to inject steroids in 1968, so I want to look back before that year. Before Schwarzenegger took steroids, he was a powerlifter and weightlifter. This means that during his time as a natural athlete, he always trained for brutal strength, thus creating a solid foundation!

In the magazine “Kraft Sport Revue” number 34, appeared a report of a competition (Year 1967) about Arnie’s strength performances. Deadlift 280kg, squat 200kg and bench press 170kg. These are truly performances that only a select few reach or never reach.

In 1968, Schwarzenegger would experiment with the use of steroids. Fortunately, I own the magazine (Kraft Sport Revue Number 46, 1968) that also documents his strength. He managed to deadlift 310kg, to bench 200kg and to squat 210kg.

The magazine “Sport Revue” promises the readers that Schwarzenegger has been forced to take steroids. I have analyzed the magazine, but I have not been able to find any information about who or what forced Schwarzenegger to abuse drugs.

So last but not least, I want to present a final and interesting quote by Arnold talking about drugs:

Schwarzenegger: “I think steroids are overrated. People think that you can gain twenty or thirty pounds of muscle mass with them, and of course you can’t do that under any circumstances. I always weighed 102 to 104 kilos throughout the year and that was the weight I went into competitions at. I also won my last Mr. Olympia title in 1975 at 102 kilos”.

1 thought on “Schwarzenegger Was Forced To Take Steroids”