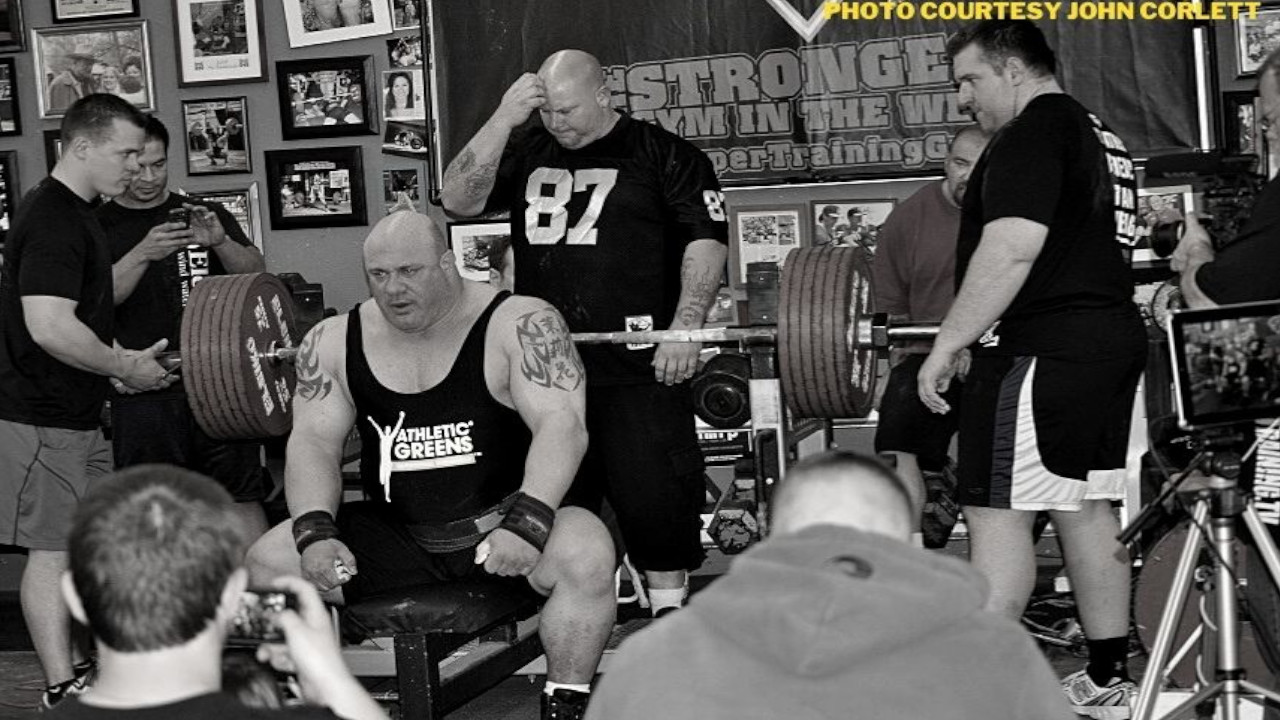 I know for me, you often recall the first time you see someone who impresses the heck out of you. That was the case, when I first saw Scot Mendelson. I was a powerlifter interested in improving my bench press as well as my bookends as well.

In 1996, I had officially benched 457, but I wanted to do more- way more, so I would go to any powerlifting or bench press only meets I could for information and inspiration. In 1996, I went to a meet in Burbank, California and I saw Scot for the first time. He was approximately my height 6’2” and he weighed about 260, with a heavily muscled upper body. He benched 570 raw that day with a close grip to win best bencher of the meet and I knew I had to learn about how he got so strong!

Scot went on to become the all time world record holder in the shirted bench press, being the first over 800 at the 2003 APF Seniors and then hitting the all time raw world record in May 2005 in Massachusetts at the New England Bench Press Classic Meet with a 715lb lift. The clip of this video on YouTube has over 2 million views! The hand off for this record lift was done by IFBB Professional Bodybuilder Moe Anouti.

Scot detailed his training in the Edition of Monster Muscle Magazine. This is what Scott had to say about his training for the raw world record in 2005: “Discipline equals power. Hard work pays off. Stay true to your program. I am 100% dedicated to my lifting and never waiver, cheat on my diet or go out and party.”

Scot talked about the pressure that he places on himself because he has always wanted to be the world’s # 1 bencher. “Every time I compete, I throw up beforehand, I typically lose 15 pounds of body weight before getting on the platform.”

Scot detailed in this interview was that he broke the raw world record because he felt that a lot of the shirted benchers were not strong enough raw and many were cheating with multiple ply gear, loose form and not fully locking out. Scot said he felt the strongest benchers of that time were Gary Frank, Ryan Kennelly, and Andy Fielder.

Scot said that one of his training secrets was that he does a lot of boxing, Muay Thai, and kickboxing training that gives his greater stamina, enough to achieve multiple heavy lifts. He learned this cross training from Tennis legend Martina Navratilova. Martina had plateaued in her performance but she learned that by cross training with swimming and volleyball- her tennis performance increased and she was able to achieve world championships.

“My training covers all aspects. If you leave a weak area you will maybe a weakness. You need to be a perfect machine. Most powerlifters aren’t athletes, they just lift. When you take an athlete and incorporate powerlifting, you get a much different beast.” Fast forward over ten years and we see that UFC fighters like Jon Jones who have added powerlifting to their training is the best fighter in the world.

Scot said his training changed greatly over the years as he has learned not to overtrain. He no longer does any band, chain, or speed work because he feels it is bad for his joints. “I pay more attention to my body as well.”

When Scot was asked about his diet, he said that his natural body weight is approximately 250 pounds, but he consumes up to 12,500 calories per day to compete at 330 pounds. Scot drinks a 7,500 calorie weight gainer shake that was his own personal blend. Scot eats 5 pounds of red meat per day with lots of vegetables, chicken and pasta. Mendelson said he was in good health and 16 years later now, he is.

In a YouTube clip taken from my friend Ned Low’s Powerlifter Video Magazine, Scot described how he likes 12 week training cycles and at the time of this video, he was preparing for his first 800 lb bench press, saying that he trains the bench twice per week. Scot said he only trained heavy those two bench days per week, doing lots of doubles and triples one workout then heavy board presses the next workout, with assistance exercises being done on both days. Scot said on this clip the number one mistake he sees lifters making is not focusing properly. He sees too many lifters go to meets and socialize too much.

Scot demonstrated hammer curls as a favorite assistance movement, as well as Icarian rear delt machine flyes with a custom made 500lb stack! Back muscles are strengthened through chest supported rows with varied grips and seated cable rows, then reverse hyper extensions. Triceps are trained by push downs as well as lots of close grip work including to boards.

Scot eventually benched over 1000lbs with a shirt and tore his pectoral horribly at a meet at Mark Bell’s Supertraining Gym in 2013.

Scot has also had success with competitive arm wrestling. There are many YouTube videos which show Scot arm wrestling and training for that hand to hand competition.