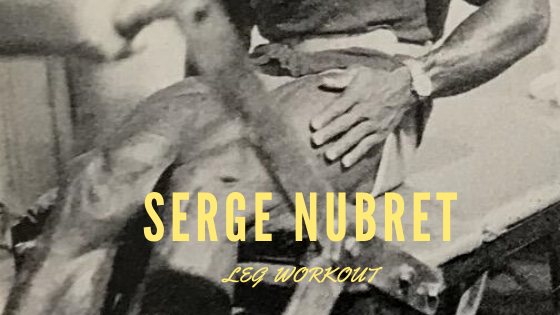 “If I told you Serge Nubret – that super champion of all-time – is 41 years old, would you believe me? Of course you would not…but he is. And in spite of that he just keeps getting better and better and better.

I’ve observed him so often training, I feel these to be some of the most treasured moments in my physical culture career. Serge has such a diverse and different way to work-out. Often is discombobulates the Establishment with its current ideas of positive, negative, sets and pre-sets and all related pumping mania. Nubret has a simple philosophy! He trains ’til he doesn’t want to any more. These workouts may last on each body part with sparse resting up to an hour.

His frontal thighs are an example of ‘the things’ some fellows can only dream of in development. And yet, he hardly ever squats any more, although he does occasionally muck about with the move.

The leg programs I’ve taken down in memory consist of very simple training fare, but are not quite so easy as they look when done the ‘Nubret way.’

He begins on the thigh extension machine…for 10 or 12 reps with a weight he feels is comfortable. For three or four sets he’ll add weight going up.

When he weight starts getting really heavy, he does his set of reps at completion pausing for 30 seconds. After the pause he does a few more reps. Suddenly he moves off the machine and tears a few plates off – back on immediately for more reps. By now his face and body are breaking sweat; you can tell he’s hurting.

Just as he has gone on adding weight in the early sets, he comes down using this pause and tear-down weight off method. Take my word for it…the pain is severe, but of course it’s a good pain of searing muscle fatigue and not damage. Too many times bodybuilders misinterpret ‘the train for pain’ philosophy. Serge here is training for burn and pump trying to melt and striate the fat off his thighs – what little there is. He’s carving with these ripping-dripping thigh extensions.

After what seems to be about 20 minutes of this self-brutalization he leaves the machine to cool down. By now the bearings and moving parts are literally smoking.

In the thigh workouts I observed he roped in a training partner to go along with his ‘thigh killing’ principles. He wasn’t squatting as I said, at least not with weight anyhow. But his next little gem was a ‘pip’ which he called the ‘French Squat’ He used his training partners of the moment to gain ‘psyche’ energy from. It was competition to blow the thighs away and the poor fools he enlisted to get involved with this savage quad, rectus, and other leg muscles assault.

A bit weird, the French Squat can fool you, especially if you’ve used low reps in full squats. In this case even 15 reps in full are low. Serge picks his last workout’s high number and simply goes for it and onward adjusting the tension.

When he feels like it he may even hold a plate. He does in this move go as high as 300 or more reps…and once you try it, the realization rapidly becomes conscious that non-weighted squatting can be a ‘Cruel sea’ of hot blood gorging into your thighs. 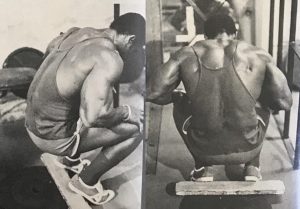 The way Serge performs this move is to squat with heels on a block to the half-way position. That’s the beginning; from here it’s all down hill. From the half-way mark you proceed to go all the way down – but never on the way up do you pass the half-way mark.

You just keep that tension on ’em and keep pumping out the reps until a pumping death comes knocking. Take my word for it, this French Squat it no ‘French tickler.’ But it serves about the same purpose as one of those ‘joy’ appliances giving your thighs a ‘boffing’ they won’t forget from the quads straight back to your tushie…and Nubret only stops when he has to stumble to a bench to sit down – and then he sets about in all his festering pain to torture his current or temporary partner verbally into the same position.

When Serge does squat – which is when he’s in the off-season and trying to gain bodyweight – it’s the barbell variety using a parallel-placed bench to stop ‘his Aunt Fanny’ from passing this level.

The last time he was in New York and trained at Mid-City in his bulkiest condition, he was in one of these barbell squat periods. Seeing him here with a barbell across his upper back-shoulder region is a rarely-viewed sight.”