Should I Train With Strand Pulling ? 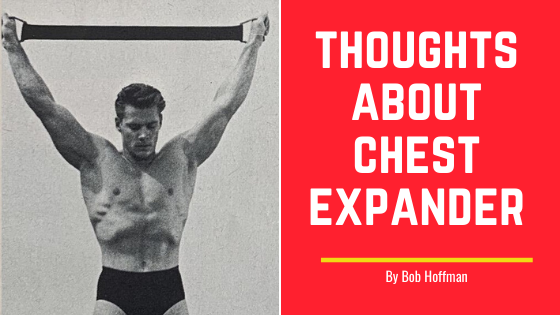 Bob Hoffman (November 9, 1898 – July 18, 1985) was an American entrepreneur who rose to prominence as the owner of York Barbell. The following thoughts about working out with strand pulling are based on Bob Hoffman’s writing! – Have fun – Mr. Berg.

Training with strand pulling
Do you use chest expanders, if not, you should, for chest expanders can play a very important part in physical training. Chest expanders serve many purposes. They are a splendid means to keep fit, to build good health, strength and muscle with a minimum of effort. They build real strength for the champion weight lifter, and big shapely muscles for the body builder and the physique contest entrant.

One would think that weight lifting alone, would provide enough training for the champion lifter at the World’s Championships. However, many of the champions from other countries include chest expander training or cable training, as it is often called, in their year round training and the concentrated training before a world’s championship.

The Russians in particular are great believers in this form of training and they will be seen doing chest expander exercises with their early morning calisthenics and special training.

They are silent in operation, so can be used late at night and will not disturb other members of the household. They will expand your chest and build your muscles. In fact, you can watch them grow as you train in your own room at home.

According to Bob Hoffman (Father of Weightlifting) before starting chest expander training, you must select the type of expander you will train with. Springs, round elastics, and flat bands are all excellent exercises. 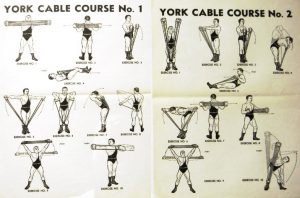 Chest expanders have been popular for the last hundred years, and no one type of expander has proven its superiority to such an extent that it has put the other type out of business.

No doubt springs are the biggest sellers, for they look massiv and glamorous in the beautiful boxes in which they are packed for sale. Round rubbers are flashy too, with their gleaming metal parts and the many colored strands. Flat bands are not so glamorous in a box. They are sort of a Cinderella in physical training equipment.

They are the kind Bob Hoffman liked best and they are the preferred type of man bodybuilders.

Flat bands do not pinch the skin and can therefore be used in many body contact exercises which could not be performed with springs or round elastics. Should they break, which is very rare as they normally last for years, they will not injure the user in any way and of course they are easily replaced.

Bob Hoffman have received reports from Marines who carried this little exerciser through years of training and fighting in the Pacific, and when the war ended, the strip exerciser was still in excellent, useable condition.

In 1955 Steve returned from Okinawa, where he was stationed, to win the Mr. America crown. The nearest barbell to his base was 12 miles away, a crude Japanese barbell, and owing to distance and time required he could not train with barbells with regularity.

But he could and did train with expanders and the magnificent physqiue he showed in the Mr. America contest was the best proof of the excellent results that can be gained with this form of training.

Bob Hoffmann was one of the judges on that occasion and the contest advanced to the point thwere Clarence Johnson came to the panel of judges and said, “now we must reduce the leading contestants to ten.” They reduced to 12, and Bob said, ” I can cut off two more just about as easy as I can cut off two fingers.”

So Clarence said, “Ok, we will make the final selection from twelve instead of ten.”

From these final 12, Steve Klisanin was selected as Mr. America.

Considering that he was stationed on the oder side of the world while training for the Mr. America contest, this is a very good recommendation for the body and strength building ability of chest expanders.

Editor’s note: Use the tag system below for more articles