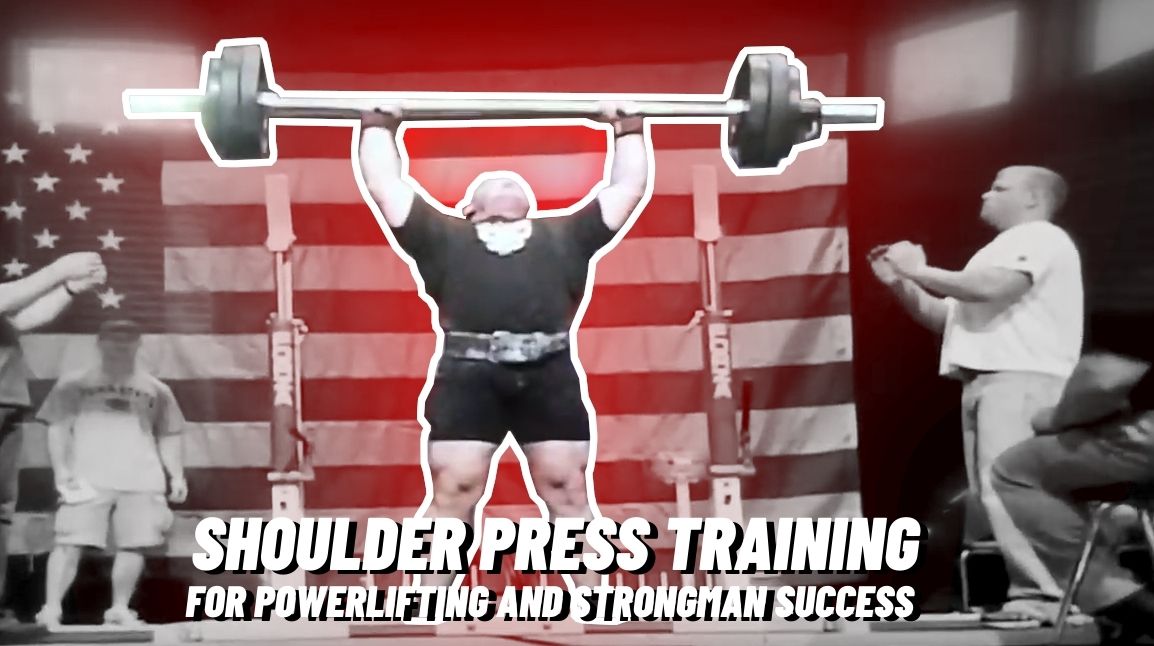 When I began lifting weights in my basement in the early 80s, the shoulder press was one of my favorite lifts. I had to do them seated, but training alone, I always did them because I could push them hard without a spot- if you missed the lift, you just put it back on the bench press uprights on which I was seated.

As soon as I started lifting at my high school for football, I did not focus on any type of military press, until college when I discovered the Bill Kazmaier Muscular Bulk Program, which emphasized shoulder building with standing dumbbell presses and various dumbbell raises. My emphasis was still primarily on the bench press, as I was a powerlifter.

In 1993 I discovered Westside Barbell and Louie Simmons writings. Louie described power rack training among the training principles taught by Anthony Ditillo, a training based author Louie admired who was known for his outrageous muscle mass. The final impactful factor that convinced me to add heavy military presses and power rack presses to my training was a picture of top IFBB Pro Bodybuilder Michael Francois doing 315lb power rack military presses at Westside Barbell!

I had numerous old Ironman Magazines as well as the then current Milo Magazines which had Anthony Ditillo articles in them. I soon purchased Anthony’s books, The Development of Muscular Bulk and The Development of Physical Strength. These books were once cited by famous trainer Charles Poliquin as being the best source of training information ever printed. I agree that both of Anthony’s books and all of his articles are amazing sources of training information- his books have hundreds of programs, philosophy and some dietary guidelines to follow to gain muscle mass or lose body fat. The only books that I have seen which come close to Ditillo’s are those authored by my friend Josh Bryant and Adam Benshea at Jailhouse Strong.

Right as I was lifting a 500lb bench in the gym…my shoulders started to ache and give me problems when I would train. It was 1999 and I decided to add Ditillo style rack military work to my training sessions. I never implemented all of the high volume that Anthony advised in many of his programs, but I certainly used the exercises that he recommended.

For a 6 week period around the holiday season, max Effort bench press night would be replaced with seated partial power rack presses. Often times me and my training partners would work up to a single with the bar resting on a pin level either at our shoulders, chin, nose, or forehead level and lock that out – last man standing! With many strong benchers in my garage gym, we would see many successful attempts of over 300 lbs. When everyone hit their max for the pin level of the day, the pins would be adjusted so that high lockouts, of two inches or so, would be attacked again as a contest between gym members. I know many times I would lock out over 400 lbs.

This workout of power rack military presses was fun, but it also let our shoulders recover from a year of heavy benching. All of us got stronger shoulders from this program. We would take the proper time to warm up and then take our max attempts. When we locked out a press, we would hold the lockout for up to 5 seconds in order to build the rotator cuff as well as tendon and ligaments that make up the shoulder girdle- the only joint in the body that rotates 360 degrees. Make sure you are firmly seated on a bench or military press bench- with lower back support. Take a shoulder width grip and squeeze the bar hard. I would pull down on the bar to begin my single attempts- in order to activate my rotator cuff muscles prior to pushing up to lockout out the bar.

Look at any strength great who pushed their shoulder press up to world class level and you will see that the presses built all three heads of their deltoids and the resulting muscular development could not be achieved without such presses. I am talking about Bill Kazmaier, Ted Arcidi, Zydrunas Savickas, Eddie Hall, or Josh Bryant. Military presses are the safest way to build the strongest shoulders in the world! All these lifters did some lateral raises and front raises, but the bulk of their shoulder training was presses.

We would always work up to heavy singles in the power rack military presses- but there were workouts where we would finish with pump sets of 225 for 20 reps on the two inch lockout or even 135 for 20 on the presses from the shoulder, neck or chin level. The flushing of blood leaks felt therapeutic. Pumping up your shoulders is a very effective method of training, one that was also written about by the first man to bench 600lbs raw, Pat Casey.

After a few months for the power rack military press program, I would suggest the lifter transition to full range of motion standing military presses with a Barbell or a pair of dumbbells. Shoulders recover quicker than chest muscles, so a lifter can train their shoulder presses at least twice per week. Recall that the top Olympic lifters of the 1970s like Vasily Alekseyev and Ken Patera had military presses of over 500 lbs by pressing frequently with low reps and many sets.

To correctly do a standing press, take a shoulder width grip on a bar loaded on a rack, take a deep breath and unrack the bar, stepping back to take a firm, shoulder width stance- toes gripping the floor and heels locked down. Now take another deep breath, hold it, and press the bar over the head while fully locking the arms out with the elbows in line with the ears of the lifter. Pause for a second- having exhaled your breath as the toughest part of the lift. Inhale as you lower the bar and re-set for another repetition. I preferred sets of 5 reps for the full range of motion military presses and higher repetitions for the dumbbell presses- Kaz recommended 10 rep sets!

Did this program work? I would not be writing about it if it did not. In 1999, I was stuck at a 470 lb bench with achy shoulders- to benching 534 in 2000 to beat the great Josh Bryant at the National Championships. When I began competing in strongman. I pressed a 275lb log for 3 reps and also did push press of 320 at the U.S. Strongest Man Contest in 2005. And speaking of Josh, he did plenty heavy rack presses en route to his push press of 445 to win the U.S. Strongest Man title.

1 thought on “Shoulder Press Training for Powerlifting and Strongman Success”