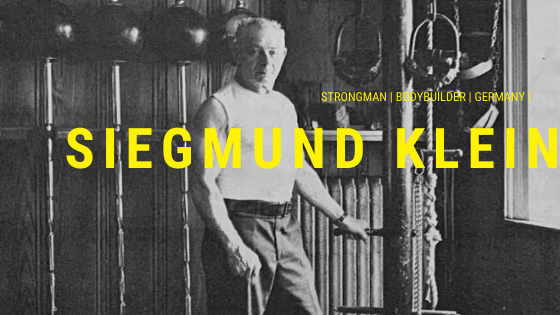 He moved from Germany to the United Stated. He opened there a gym and was able to make a living with weights. Here’s Siegmund’s Klein story written by Iron Historian Thomas Dugan in 1970 S&H. – Mr. Berg

For the past fifty years Siegmund Klein, born April 10, 1902 in Thorn, West Prussia, Germany, has been one of the Iron Game’s most ardent devotees. Never, except when sidelined by injury, has Sieg forsaken his training.

At the age of 17, Sieg sent for and received his first set of barbell. Three times each week he would hoist the bells off the floor, go through his exercises, constantly experimenting with many different programs until he evolved his perfect system. To this day he uses the same basic routine and alters it only slightly depending on his goal at the time.

As Sieg’s goal changed so would the routine to meet the demands of his ambitions. Initially he was involved primarily in bodybuilding and strength feats, then in professional competitive weightlifting. Today he train because of the health benefits he derives from weight training. Though 68 years of age, Sieg moves with the effortless ease of a much younger man. And his mental outlook matches his youth full appearance. 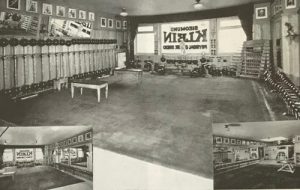 Since July, 1916 Sieg has successfully operated a gymnasium in New York City, beginning as manager of the late Professor Attila’s gym. Four years later he opened his own place on 48th Street.

Every morning at 10 A.M. he welcomes people from all walks of life who seek good health through sensible weight training.

For ten hours each day Sieg advises and assists his pupils in reaching their individual needs and aspirations with infinite patience and unmatched skill and competence. His schedule calls for a five and a half day week, without a vacation.

Maybe once in ten years he’ll take a week off. A demanding regimen, but apparently he thrives on it.

Several times throughout the years Sieg has gotten sidetracked – vaudeville, manufacturing barbells and gym equipment, publishing a monthly pamphlet and several booklets, and on competing in strength contests.

As soon as he realized his business was being affected, he abandoned these distractions. For him it seemed a logical and simple decision. His profession of gym owner operator is his life, all else is secondary and therefore relatively unimportant.

He has much to be satisfied for. In the fields of professional weightlifting and bodybuilding he reached unparalleled heights and near-perfection.

To this da he is acknowledged and embraced as a living legend in the strength world. Although not consciously his gaol, he has attained immortality, ranking with Sandow, Strongfort and Steinborn as one of the all-time greats in the Iron Game.

Klein is married to the former Grace Attila, daughter of Professor Attila, renowned strength athlete and trainer of Eugen Sandow. Shortly after the death of Attila, Sieg took over the management of the Professor’s gym, thereby joining two names of renown, first in business and finally in marriage.

Most everyone who is anyone has trained at Klein’s gymnasium throughout the years, including such greats as John Grimek, Steve Reeves and Henry “Milo” Steinborn. Whenever any strength athlete comes to New York he stops by Sieg’s to train and chat in one of the most beautiful and best equipped gymnasiums anywhere in the world. 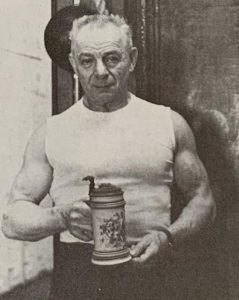 For the past twenty-five years Siege’s greatest passion has been collecting beer steins and paintings from the Munich School of the 1890’s, of monks drinking beer.

He visits antique shops and private collectors in his constant search for additions to his collections, which he proudly displays in his gymnasium and townhouse home. His enthusiasm is as intense as ever and any chance for making another acquisition will set him on the trail once again.

To celebrate his 35th birthday he bent pressed the 209lb,. Rolandow dumbbell.

These lifts were all performed at a bodyweight of 147 3/4lbs.

He was considered the “Most Perfect Physical Specimen” of his time and reigned supreme of many years as the Professional Welterweight and Middleweight Champion, as recognized by George Jowett’s American Continental Weightlifting Association.

Sieg’s measurements, which have not fluctuated since early in his career, are as follows: 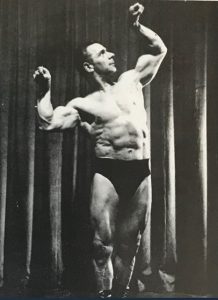 With his boundless energy and positive approach to life and the Iron game, it is hoped that he will continue to operate his gym and inspire strength athletes for many years to come. Sieg states that he never contemplates retirement and would consider it only if, and when, he is forced to relocate his gymnasium

I train three times per week, seldom varying my routine. If I include kettle bells or any other exercises, it is in addition to, and never in place of, my regular exercises.

I tried the six days a week, so-called split routine and have found it to monotonous to be effective. Three times a week is sensible and enough for anybody. Work is labor, exercise is recreation. Everyday training becomes work; you become a slave to the weights.

Running is a good supplement to weight training, sprinting short distances faster is preferable to jogging for long distances. I exercise to stay in good physical condition, so I can enjoy the good things in life and not deprive myself.

On competition and sports:

I competed in weightlifting because I had the urge. Now I can’t see it at all. As you get older the desire to excel is lessened.

Collegiate athletics makes good athletes perfectionists while neglecting the one who need physical fitness the most, the rest of the student body.

I am against competitive sports. Boxing and football contain too much violence and only disfigure the participants.

On diet:
In the overall scheme of things, if one had to choose, diet is less important than training.

His ideals:
When I first started training I greatly admired Lionel Strongfort and Eugen Sandow.

And I still have great respect for them. Ten years ago, I visited Strongfort in Munich when he was 81 years of age; after 40 years of admiring him, I found him to be a fine man.

It is natural and a good thing to idealize someone. But you can only, ultimately, be yourself.

Whenever I was to have photographs taken I would always bring someone along who understood what I wanted, someone with an art sense.