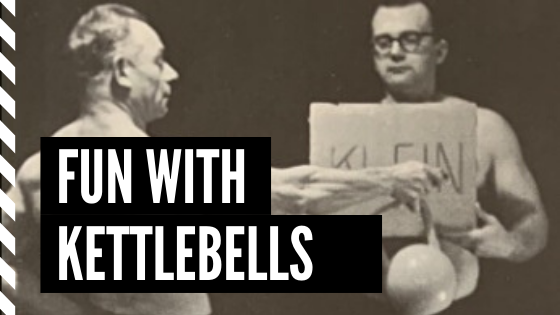 “In “Old Germany” many weightlifting clubs had a Rundgewichtsriege, a “round-weight” or kettlebell section. This group practiced the more intricate feat of Jonglieren (juggling). Regular meets were held, and frequently exponents of this skilled art worked in groups of as many as fifty, all of whom performed at the same time, swinging the weight overhead, to one another, around the back, through the legs, constantly spinning the weights in motion, all with rhythmic form.

When strongman acts were popular entertainment there were a number of athletes who accomplished some very unusual tricks with these weights. Germany had to her credit such famous jugglers as Paul Conchas, Sylvester Schafer, Spadoni, and innumerable others. Of course, the famous Saxon Trio used several kettlebells in their act too.

The most spectacular feat they did using these weights began with Arthur shouldering a large kettlebell, on top of which Hermann would sit straddle wise, also holding a kettlebell at the shoulder.

Then, as Arthur slowly bent pressed this load overhead, Herman also pressed his kettlebell to arm’s length, and then, to make it look even more impressive, Arthur would “muscle-out” another kettlebell with the left arm!

Not all kettlebell stunts are as difficult as the one just described. If you want to experience a lot of fun – and perhaps some surprises – try some of the following “Tricks and Tests” with the kettlebell. 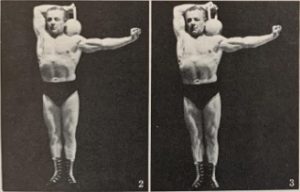 1. A very good beginning is to place a kettlebell on your left shoulder (Fig 2). Reach over your head with the right arm, the forearm resting on the head. With the palm of the right hand up, grasp the handle of the kettlebell and slowly bring the weight off the shoulder, pressing it up until the right arm is vertically extended overhead. This stunt may also be done with the palm facing downward (Fig. 3). Bodybuilders will recognize the fact that today this movement, with variations, is a more or less standardized triceps exercise.

2. Sit at a table and place a kettlebell between your feet, as shown in Figure 13. Grasping the handle with the overgrip, slowly – swinging or snatching – lift the weight and place it upon the table (Fig. 14). Credit yourself with a good stunt if you can do this with a 50-pound weight. If a 50-pound weight seems too easy, place a stool or bench upon the table and lift the kettlebell upon it without rising from your seat. Try this with about 35 pounds on some friend who thinks he is strong.

3. Another table stunt calls for the kettlebell resting on the table and the performer seated as before. With outstretched arm, elbow stiff, and palm DOWN, lift the weight off the table without bending the arm (Fig. 15). 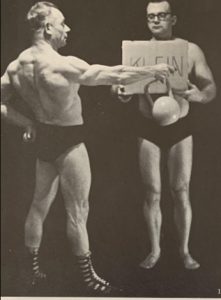 4. A unique feat and one which I find goes well at a gathering of any sort is to “muscle-out” a kettlebell to arm’s length using only the little finger to hook the kettlebell handle, and with a piece of chalk or crayon held between the thumb and forefinger write your name or draw something on a blackboard or piece of cardboard held by an assistant. In my stage work I have done this with a 25-pound kettlebell (Fig. 1)

Lifting a kettlebell with the little finger from floor to overhead is quite a stunt if you have very strong fingers and can stand a little pain. A member of my gym many years ago, one Stanley Krisnowski, could do this stunt with a 100-pound bell. My father, who was unusually strong, could take a 112-pound German kettlebell by the handle with his little finger and lift it from the floor to the top of a table of average height, then lower it to the floor. 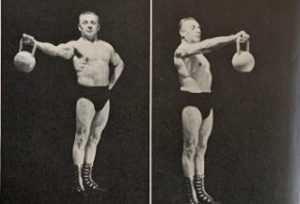 5. A “muscle-out” stunt: Grasp the handle of the weight palm up and muscle it out to the side. Slowly carry the weight forward, and as it comes around, slowly turn the wrist so that the palm will be down by the time the weight is out in front of you (Fig. 6  & Fig. 7). 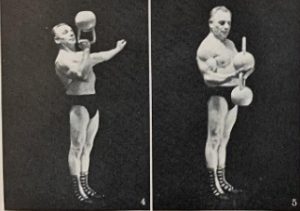 6. Here is a good balancing stunt. Swing the kettlebell to the shoulder, but instead of allowing the sphere to fall on the forearm, hold it upright at the shoulder as shown in Figure 4. Now slowly press the weight overhead. As you start to press it up you must grip the handle tighter and tighter or the weight will fall against your forearm. When this does happen, see if you can “snap” it back to correct position. This takes good timing and balance.

Figure 5 shows another novel oldtime stunt with a pair of kettlebells. Place the handle of the first bell across the upturned palm of the right hand, then balance the other kettlebell on the same palm. Now curl the two weights to the shoulder. Slowly carry the arm back so you will be able to press the two weights overhead. You must, of course, start this with light weights and to maintain balance keep your eye on the weights as you press them overhead.

8. The one-arm get-up (Figs. 8 to 12) is a general test of strength which had considerable appeal to most strongmen of yesteryear and was practiced by most of them, even those who did not use it in their public appearances.

It has always made a hit with the theatrical public, for it was obvious to them that magnificent strength was being displayed when an athlete did a one-arm get-up with a heavy bell or a human weight, such as Otis Lambert did with Adolph Nordquest plus two 15-pound dumbbells which were attached to Nordquest, a total of 220 pounds.

G. W. Rolandow did, if memory serves me right, a one-arm get-up with a barbell weighing 190 pounds – and that takes some strength! It was a much simpler feat with a human weight in the “ball-up” position. When the strongmen in vaudeville more or less stopped their weightlifting acts, many went into the hand balancing field, where they still made use of the opportunity to display some strength stunts.

Invariably they would do the one-arm get-up. Clevio Massimo would perform this stunts by supporting his partner in the following manner: Massimo would place his right hand on the upper part of his partner’s chest. Then the partner would grasp Massimo’s wrist with both hands. With the aid of his left hand, Massimo elevated the partner to the overhead position, so that the human burden was now at the strongman’s shoulder with his legs elevated.

Massimo then pressed the partner to arm’s length, after which he would lower himself slowly to the stage floor until he was flat on his back. From this position he would then do a one-arm get-up, all the while holding the partner overhead with the one arm.

This was an extremely impressive balancing stunt which called for enduring strength. Others also performed this stunt. Some European strongmen, to feature the layout part of the feat, would have an assistant place a row of knives under them so that in the event of a miscue a serious injury might result.

I would not suggest that any of you try this dangerous embellishment, which is being mentioned only to let you know to what lengths some athletes would go with this particular stunt in order to impress an audience.

One post-vaudeville athlete who was skilled in the one-arm get-up was our good friend Ray Van Cleef, whose monthly column always proves so interesting in this magazine.

On many occasions when he trained at my gym Ray performed this feat with a solid 120-pound kettlebell. This particular stunt stopped many outstanding lifters of that period, nevertheless I witnessed Ray perform it many, many times.

In passing I might mention some of the notable records which have been performed with Kettlebells. George Lurich, the Russian strongman-wrestler, performed a deep knee bend on toes while holding a 110-pound kettlebell in his left hand and one of 112 pounds in his right.

This was done in 1899. Three years later he curled with one arm a kettlebell weighing 154 pounds. This was done with the legs bent and the body leaning forward, the elbow resting against the body.

There are many more juggling feats that may be performed with kettlebells, but these take a great deal of practice and patience, not to mention strength and skill. Some of those described can not be done with the modern kettlebell handles which slip over a dumbbell bar, but those that do lean themselves to the present day equipment, and there are several reason than to see how you compare with the men of yore.”