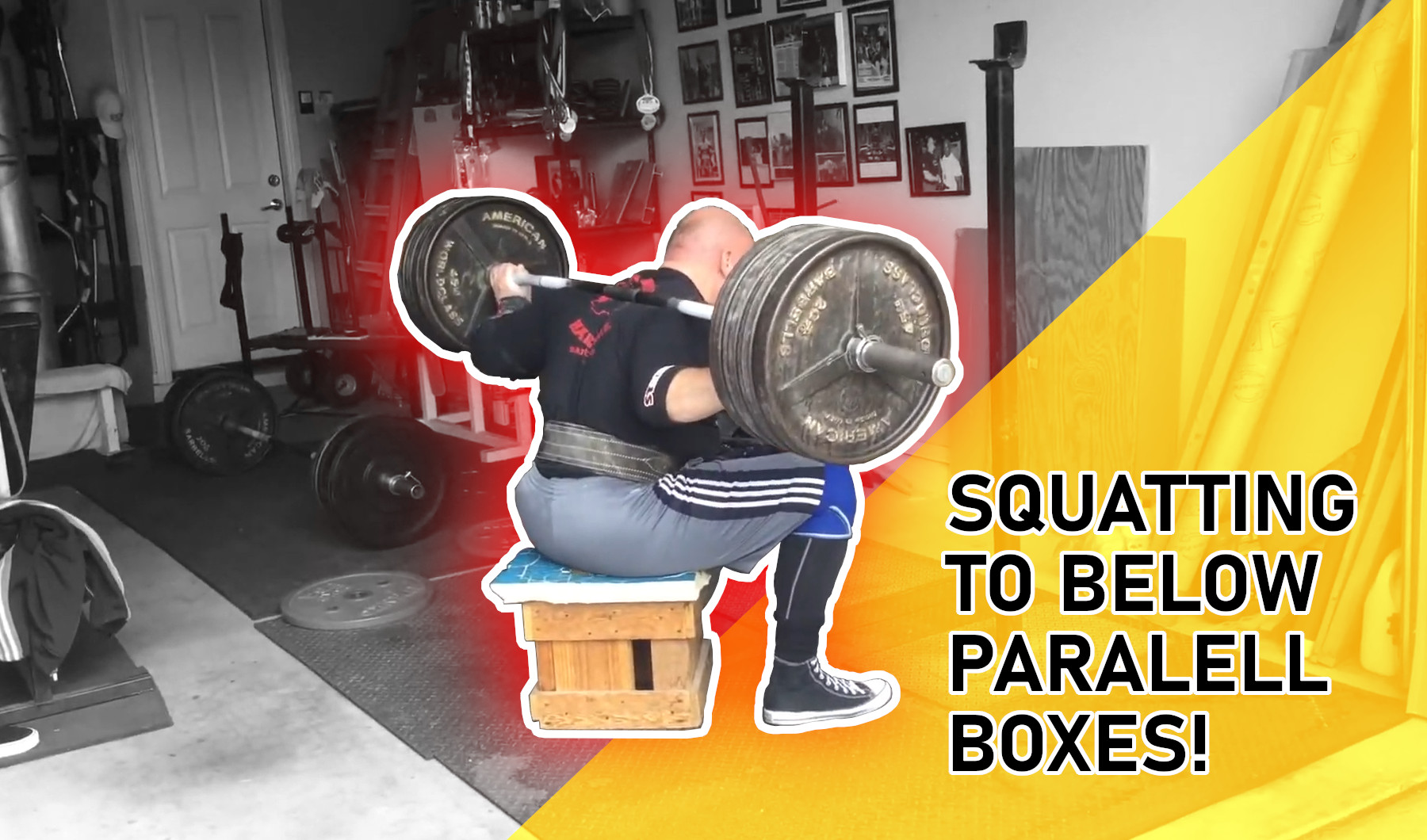 I began training my squat via the Westside Barbell Box Squat training program in 1994. The staple in my program was the 12” box, which guaranteed that every repetition I did on the squat was below parallel. As Louie Simmons instructed, if every rep in training is below parallel, you will never have to ask your buddies if you squatted deep enough.

Louie Simmons had written about squatting to a hassock as early as 1988 in Powerlifting USA, but I did not follow his advice then. I obtained a hassock and added it to my routine. By the time I began box squatting, I had a best official squat of 615 lbs, so I was an intermediate level lifter. I had suffered a hip injury goofing around at a pool so I started squatting to a milk crate that was 10” high.

My training routine at the time was the standard 12 sets of 2 reps for two weeks, then 10 sets of 2 reps on Dynamic Effort lower body night. These squats were done with my competition stance and to a 12” box. This workout could be best called “ten minutes of terror” as I would race the clock to do all the sets in two AC DC songs. There was no sitting down between sets. This workout was the three week dynamic wave for which the poundage percentages were 50, 55 and 60 % of my contest maximum for the 12 or 10 doubles. There was no accommodating resistance with bands or chains used- but I did follow Louie’s advice and try to do each repetition with as much force as possible- Fred Hatfield’s Compensatory Acceleration. After the week of 10 doubles at 60 % you would begin the wave over at 50%.

At times, I would then squat to the milk crate for 8 to 10 singles with as wide as I could stand and pause on the crate. The idea was the extreme range of motion and the loaded bar would strengthen my hip joints. This worked perfectly as my hips healed and I put 100lbs on my total each year for 5 years. I never used more than 225, 245, or 275 for these squats, but I learned that squatting extremely low to an object was a great way for me to get stronger. Why so many sets of squats? As Louie said, they did a lot of a few things at Westside. I was hungry to build a new base of strength and squatting for over 20 sets per workout on DE was the price I paid to eventually squat 810 and stand up easily with 859 at the Nationals, to lose the call on depth.

As for the hassock squat, initially, I would use the squat to the hassock as a max effort exercise with a closer than competition stance. I would vary the height of the hassock by placing a 45 or 100lb plate under the hassock. Once I could squat 500lbs and pause it on the foam hassock, my competition squat went to 700lbs. This exercise also increased my leg strength for starting deadlifts.

In my training experience, super low box squats made me very strong without wearing out my nervous system or my body. There are many reasons for this, first 500 lbs to a 12” or less boss is less stressful than handling 700 plus pounds on the squat to a parallel position. When you handle heavy squat weight, it takes a toll on your shoulders and arms- specifically the elbow/brachialis region on the forearms. This makes heavy bench pressing difficult during a training week. The positive carry over from deep box squats allowed me to do less deadlifting and avoid Central Nervous System burnout that comes from too much deadlifting.

As I got stronger as the three lift powerlifter that I wanted to become, I learned to optimize my training efforts so that each lift received the proper amount of training and one lift’s training did not negatively impact another lift.

As I got stronger with my squat, I added squatting to a side by side set of cinder blocks. I did this movement because after box squatting for a few years, my quads lagged behind my hamstrings and hips strength. At 6’2”, narrow stance squats to cinder blocks built quads. I would vary the height of the cinder blocks with 1/2” wood sheets on top.

My training was done in my garage and I had no fancy equipment to target quads such as a leg press, hack squat machine or belt squat set up. The cinder squat worked great and allowed me to compete in powerlifting and strongman for 20 plus years after mastering it. My training partners also used the cinder block squat as well as various box squats to become some of the best competitive squatters of their time and class.

My one time protege, Josh Bryant, one upped all his Yorba Barbell mentors with a 700 squat to a 9” cube- as seen on YouTube. I eventually built up to some awesome weights, for me, on low boxes and hassocks. Many of those lifts are on my Paul L YouTube Channel as well my Instagram.

Knowing what I know now, deep box squats can be used with bands, chains, specialty bars and the lightened method as well. As Super D, Donnie Thompson says, to add to the horror you could squat with kettlebell, fat bells, a keg or a sandbag to a low box- as shown by Brad Gillingham on his HMB blog lately.

Give super deep object squats your best effort and let me know how they work for you.