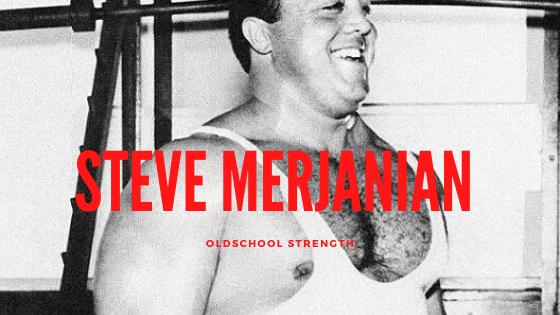 In this modern era of strength athletes there are very few men who can equal or purpose the great feats of Steve Marjanian. He is truly a man of super-strength.

Steve began his athletic career as a high school football player. He attended Manual Arts High School in Los Angeles and was chosen “all city lineman” in 1952 and 1953. Steve also participated as a wrestler during this same period.

When Steve began weight training twelve years ago he was interested in becoming a bodybuilder. However, somewhere along the line he must have been extremely impressed by great feats of strength because his present training routine now consists of mostly power exercises. Everything he does is a great of strength. He employs stupendous poundage’s. Steve is capable of performing the following feats: Seated incline press (60 degrees), 470 pounds, bench press 500 pounds, press behind the neck 335 pounds, dumbbell press a pair of 190 pounders for two reps, and a front lateral raise with a 165 pound dumbbell. As you can surmise, his deltoid strength is fantastic.

As all great athletes he has set for himself very definite goals. He intends to do an incline press with 500 pounds, also press a pair of 250 pound dumbbells. I have no doubt that he will succeed in these feats. In fact I think he will surpass both goals. No telling when or where he will stop.

Steve has an overabundance of drive and energy. Here in California we refer to him as a “swinger” Needless to say, he trains every day.

He is periodically employed as a movie extra. In fact he had a very energetic role in “Muscle Beach Party.” Big Steve is also the proud owner of a jewelry shop in downtown Los Angeles. (How about a nice watch? Only $29.95, guaranteed for 30 months) When he isn’t doing any of the above mentioned occupations he can be found at any one of the major film studios employed as an electrician foreman.

Steve’s diet consists mostly of juices, meat, and eggs. He made no references to milk or supplements. I did not pursue the subject further, however, although I do assume that he never leaves the table in a state of starvation.

I have never seen a man as big as Steve with such an amazing symmetry. He maintain relatively small hips, thighs and waist. Of course this is no accident. Obviously he has planned his training schedule well.

As I mentioned earlier, Steve trains seven days a week! WOW! He mentioned that he is very much in favor of running. He runs at least twice a week. That’s a real athlete. Steve is one heavyweight who doesn’t fit into the lazy category. It’s a pleasing change.

Steve’s routine is as follows: 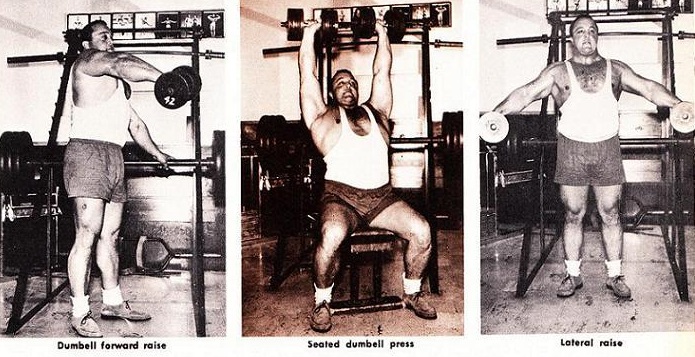 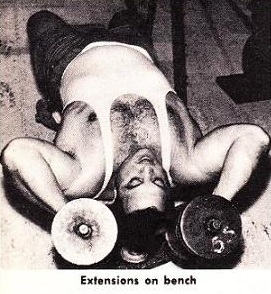 As you can see his training days are somewhat flexible. As in the case of most athletes, Steve has a source of inspiration. In his case it just happens to be the “Mystery Man of the Iron Game,” Chuck Ahrens. They are both member of Bruce Conner gym in Westwood, California. I can assure you that there is a lot of iron being hoisted around there when these men are training. 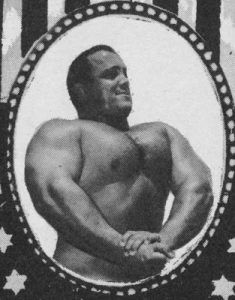 In closing I’d like to mention that Steve is now in the process of writing a book on building greater body power. But between his training, movie work, and jewelry store his time is very limited but he hopes to finish it one of these days and reveal his and the training secrets of others.”