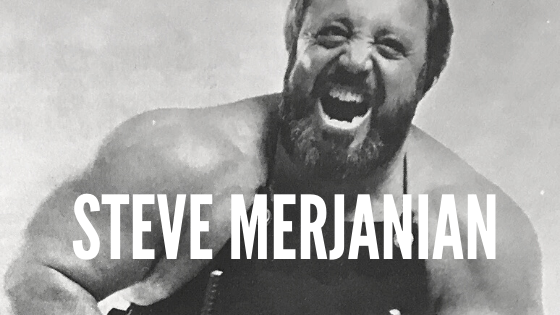 Those of us who are and have been avid admirers of size and strength, can well remember the days before powerlifting became the recognized sport it is today.

In California there was a group of men that used bodybuilding exercises with unlimited poundages and the results had to be seen to be believed. These men existed and trained from the mid to late 1950’s to the late 1960’s.

They never entered contests, so often they were thought of as fictitious characters with no credits to their names, other than the rumors that surrounded them.

Whenever the magazines reported a strength feat about the men, it was usually prefaced with “mystery man.” To a degree, they were mysterious, preferring to train when few people were around. But, the word still spread. There was Chuck Ahrens with his extremely heavy dumbbells, using them in such exercises as the Dumbbell Inlcline Press (250 pound dumbbells in each hand), Dumbbell Press (over 300 pounds), seated Dumbbell Curl (200 pound dumbbells in each hand), and a 405 pound Bench Press for 20 reps. He was strictly an upper body specialist, and weighed 330-340 pounds.

He was living in the Santa Monica area, but preferred to remain to himself.

Next was Richard Kee, who was known for his incredible shoulder width which tapered to a very thin waist. He had great strength, Bench Pressing 525 back in 1957. He, too, weighed over 300 pounds.He was a probation officer. 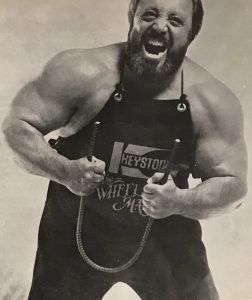 The third man, and probably the least mysterious of all was Steve Merjanian. Steve has been seen by man people, performing a variety of exercises, so he is very real.

Steve is considered a shoulder and back specialist, and the photographs support this. His bodyweight flucatuates between 280-300. Steve trained five days a week, with the age of 44 he did repetitions with heavy weights.

In the 60’s, he would commence each workout with a quarter mile run, then begin his routine. 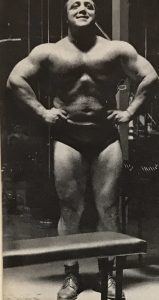 At one time, Steve trained for three years with Bill Peanuts West and Pat Casey at the famous Westside Barbell Club, where everyone there trained heavy. Since one of Steve’s favorite exercises was the Incline Press, it was not uncommon to see him take 350 pounds as a warm up and perform 10 easy repetitions. His maximum was 495 pounds. The other exercise he considered a favorite was the Press Behind the Neck seated; 335 pounds for 7 repetition were Steve’s best attempts.

Other exercises he used extensively were:

Squat were not done frequently, running in sand for resistance, and running stairs were often favored over squatting. Holding two 75lb dumbbells out to the side at shoulder height in an iron cross position was also a strength feat Steve performed.

Steve favored two types of routines. One emphasized 10-12 sets doing 5 singles for the last five sets with a heavy weight. The other was 8 sets of 5 reps using as heavy a weight as possible.

His back work emphasized pulleys of various types, twice a week using high repetitions for a good stretch and muscle pump.

Steve’s diet was basic. No protein supplements, just multi-vitamins daily. He ate two breakfasts, had several sandwiches at mid-morning, a salad in the early afternoon and for dinner: fish, turkey, chicken or another lean meat.

His eating habits have changed little in the 80s. He has not changed his approach very much to training. He weighed 295lb and was very strong, Incline Pressed over 405 pounds and Press Behind Neck over 315 pounds for repetitions.

In an a conversation with Bill “Peanuts” West, it was his opinion that Steve has kept his great strength because over the years he has kept his routine consistent. Plenty of rest and relaxation, a mind free of worry, good food and regular training.

1 thought on “Steve Merjanian: The Powerhouse!”