At times he trained his entire body in one day, three times a week. For a period of six months straight, he ran a five minute mile, without missing. At other times he’d jog about three to five miles. He also said that bodybuilders should also include cardio in their training shedule.

Calves
toe press on the leg machine using high reps and large number of sets and, for lower back HYPEREXTENSIONS 4 x 12 reps

In the old Flex magazine (1994 Page 70), I found an another routine by Reeves. John Little (Co-Author of Bruce Lee’s and Mike Mentzer’s book) interviewed Reeves. He told him that trainer ‘Ed Yarrick’ has great knowledge and helped him to gain a lot muscle size.

Steve Reeves made the statement that the following routine is his “one-set three days per week” training.

Monday, Wednesday and Friday! – Have fun. 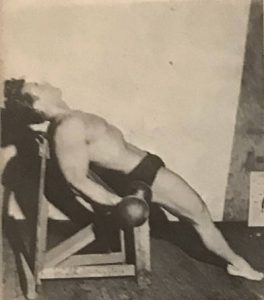 Curl on incline bench which he did regularly in every workout. 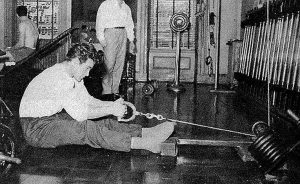 He also favored the long cable rowing exercise. He would bend his body forward and maintain this position while he pulled the bar to his chest by arm and lat power alone, and then resisted the pull of the weight even slower. 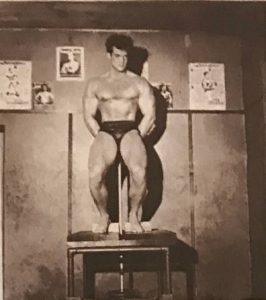 Some bodybuilders scorned him when he refused to perform the full squat. He sought an exercise that worked the lower part of his thighs as opposed to the upper area near the hips and buttocks. By trial and error he arrived first at a version of the front squat and then the hack lift done on a special machine.

He performed high sets (5 -8) and repetitions that also tended to be high (8-20) usually around 12. Above all he really pushed the repetitions until his muscles would contract no more.

Reeves was concerned with the development of muscular bulk, but only where he considered that muscle size was necessary for aesthetic harmony.

Reeves didn’t want to develop any added size on his waist or hips. He therefore performed as little heavy exercise as possible for these areas. He also believed that direct trapezius work in building that muscle would detract from the wide shoulder look he was so keen to preserve.

He hated ‘Tapered end’ seen so much on many modern bodybuilders. He therefore gave tremendous attention to his forearms and calves. No bodybuilder should make the excuse of not being able to build large calves until he has worked his own calves as hard as Steve did his… Many sets, nearly every day. Dumbbell wrist curls and regular calf raise.

Reeves knew that the full squat, for tall men, built too much muscle size on the upper thighs and buttocks. Thus he specialized on building his vastus internus and externus lower down the thigh at a point nearer the knee. He used the leg press and favoured the hack squat (and occasionally the front squats).

Steve hated to think that he might be building a feminine chest appearance, low pectorals, so emphasis was put on the incline presses rather than flat benchpress which built the lower pectoral. The incline work built the upper chest nearer the neck. One of his favorites was parallel bar dips.

Lats were built with rowing exercises, on a long pulley (see above) and also by chinning. Biceps were built with his favourite, incline bench curl exercise. The incline curl was practiced most for his biceps, but he also did the barbell curl. Triceps were built with the military press and an original triceps exercise whereby a single dumbbell was held at arms length (one arm at a time) while lying face upwards on a flat bench, keeping the upper arm verticle the elbow would be bent until the dumbbell all but touched the opposite shoulder. He also liked the lat machine pressdowns.

Steve Reeves believed in owning a column-like neck and he gave it substantial work via human resistance. He worked it from all sides to keep it balanced. The thigh biceps were given heavy exercise with the thigh curl done lying face down on a bench. Steve believed that the development of this muscle reduced this size appearance of the buttocks and the added curve of the rear leg when seen from the side.

Reeves trained with clockwork regularity, using the heaviest weights he could handle for moderately high reps. He would select lighter weights as his workout progressed and his muscles pumped, as he didn’t like to recover fully between sets, but rather tire his muscles with continual bombardment.

Many people thought that Steve was not strong. True he did not practice the conventional Power Lifts but on the other hand how many bodybuilder can incline curl 200lb dumbells, leg curl over 200lb?

Editor’s note: Use the tag system below and click the button “Steve Reeves” for more articles!