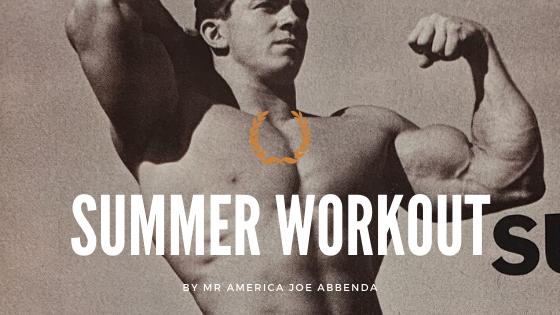 Mr. America and Mr. Universe Winner (1962) “Joe Abbenda” will discuss training during summer and he’ll give some tipps about nutrition and reducing weight. – Mr Berg

“In past years I have found myself taking most of the summer off. In fact, before last summer I hadn’t trained through one complete season for over five years. At that time I had just begun a light training, and by working out the entire summer, I gained approximately 10 pounds. In the beginning I weighed around 170, and at the end of the summer tipped the scales at 180. No monster, mind you, but I had put on weight and I could be considered slim for a bodybuilder at that time. The summer, as I remember, was a long, hot one, too. For one reason or another I never trained a whole summer season after that, that is, until last year.

The primary reasons most trainees discontinue their training during the hot part of the year is that they feel it is impossible to gain because one seats to profusely. Secondly, the summer brings with it many diversions that are not with us during the long, cold winter. There is more activity in the form of other sports such as swimming, water skiing and such. Many times the summer is spent away from home where it is not possible to train.

Even with all of these hindrances I can give the bodybuilder but one bit of advice: Don’t neglect your summer training. I say this because of a number of reasons. First off, from my own experience. Last summer, after I had won the Mr. America contest, I decided that this would be no time to lay off.

I was fortunate in that I knew I was to compete in September in London for the Mr. Universe title. As I hadn’t trained for an entire summer for over five years, I didn’t know what to expect. I had decided that I had trimmed down too far for the Mr. America contest and realized that I would have to gain weight, if anything, for the Mr. Universe.

I decided to stick to my four-times-a-week program but cut down on the amount of exercises that I would include. For the Mr. America we had used practically every exercise in the book. Usually for a contest I try to do more than the usually two exercises per body part; for the MR. Universe though, I went back to either one or two at the most per group. Even the repetitions were kept low. I found, and I think you will too that you do not have to do much to stay in muscular condition during the summer. This I think can be attributed to several things.

My diet consisted mainly of meat, cottage cheese and vegetables, including many salads. To make up for the loss of liquid I drank plenty of freshly squeezed orange juice. Skim milk was also consumed but in no great quantity, usually less than a quart a day. Along with this I include mineral supplements to make up for what was lost in perspiration.

Occasionally I would eat baked potatoes with my evening meal. On this type of diet I found myself eating almost constantly during the day, five to six melas not being uncommon.

During this period of time many days were spent at the beach. I believe it is the constant perspiring that one does during the summer season that helps keep you in a muscular condition without the necessity of many repetitions or long periods of time put into the gym.

All that is necessary is that one train regularly; I feel that anyone cane make excellent gains even during this time of the year.

I trained like this from the beginning of July until the time I was to leave for London in September. About the middle of the summer I took one week off, which is good to do every so often. During this time my bodyweight went from 204 to 217 and still in fair muscular condition.

For the Mr. Universe I trained harder near the end and lost about three pounds, which I think was necessary. All in all I gained approximately 10 pounds during the summer season which stayed with me. This is why I recommend that you not neglect your workouts this time of the year.

The workout I followed is similar to those I have described in past articles. I chose what I felt were the best movements for me for each muscle group. I did whatever I felt was necessary for the sets but kept the repetitions down to a maximum of six. usually the sets ran up to six or seven, especially on the body parts in which I used but on exercise.

On Monday and Thursday I worked thighs, calves, waist and back. On Tuesday and Friday I worked chest,deltoids, arms and calves. As I mentioned, this routine made use of the exercises which had worked best for me in the past; your choice may be somewhat different. usually we trained evening when the weather cooled to some extent.

This concluded the Monday and Thursday workouts. It is a heavy one due to the inclusion of the leg and back work on the same day. In both I attempted to add resistance whenever possible and worked up to substantial weights in both.

This concluded the Tuesday and Friday workouts. Though at the time I used heavy weights on the seated lateral raises, I have found that the strict seated variety are more beneficial. I found that the heavy swinging movement I was doing affected my trapezius far more than my deltoids, for this reason I have since changed styles.

The workout pace was a moderate one with about 2- to3-minute rest between sets. We also found that a mixture of orange juice and honey sipped during the workout helped keep the energy level high.

For the individual who is overweight summer training can be a boon. Any midsection work done at this time will be doubly effective due to the profuse sweating which is induced by the warmer weather. To those of you who are interested in reducing, I recommend this:

Stick to a high protein diet which includes plenty of fruits and vegetables. The harder you work the quicker your results will be and the sooner you will obtain the shape you desire.”