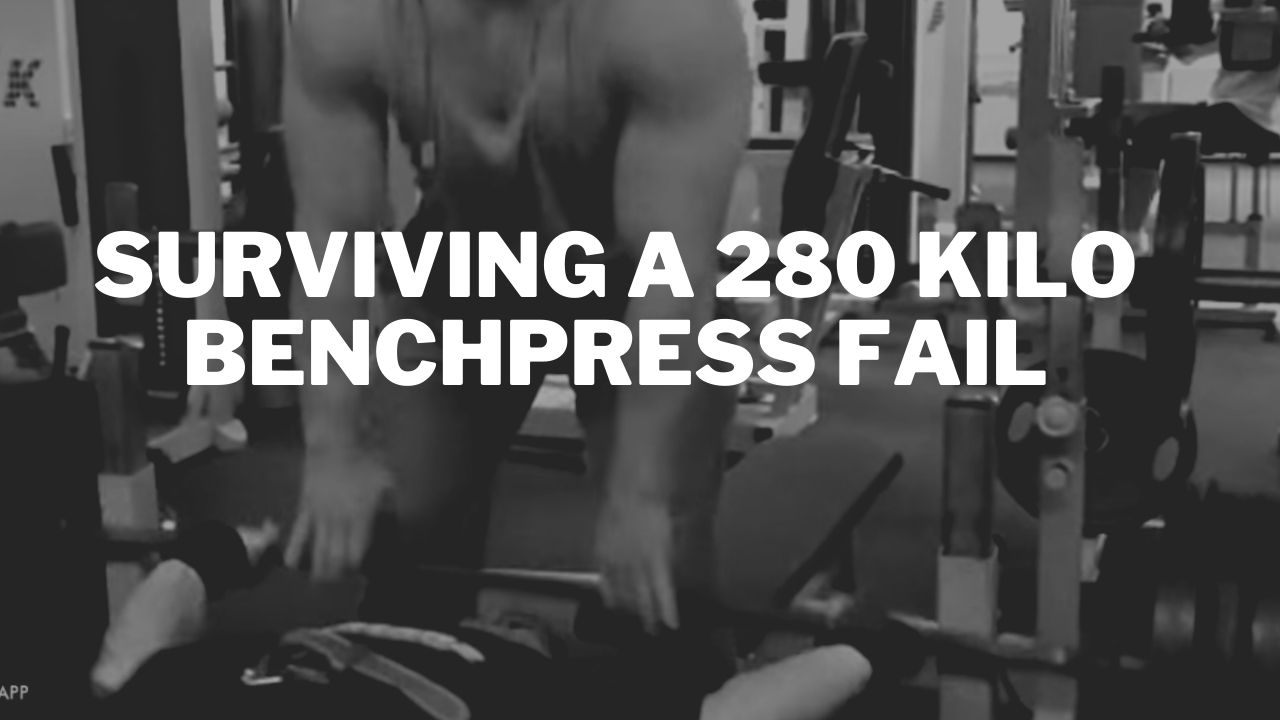 A lot of benchpress fails ended up very badly. They can even be deadly: some have broken their ribs and have paid for it with their life. Zweydorff’s story is unbelievable. A German bench-presser, he broke his skull, bled heavily, and somehow survived it. Here’s his story.

‘Gannikus.com’, a German fitness website, covered Robin’s training and story very well.  They uploaded couple of videos of him on Youtube, which I will list for you at the end of this article.

He had been doing the sport since he was twelve. At the age of seventeen, he benched 180kg and, at the age of twenty-one, he managed 230kg.

His role models were his brother and Arnold Schwarzenegger. His dream was to become world champion, but everyone told him, ‘you’ll never make it’.

‘I’m very proud to have made it. Discipline is not only required in sports, but also in everyday life. I work as a nurse, so accuracy, professionalism and precision are very important. If I make mistakes, there can be consequences for my patients that I don’t want to imagine.

I am very grateful for the sport; it has given me everything. Everything could have gone differently. At the age of twelve, you are very susceptible to drugs. Thanks to sport I have always stayed clean. I have worked in a hospital for addicted patients for twelve years, anyone can escape from any kind of drug addiction.

At a championship in 2002, he injured his right triceps. It was a bad muscle tear. He said, “My doctor told me you’ll never bench-press 200kg again.’

But after this, he became even stronger, and bench-pressed 320kg: “I had most of my title successes after the operation.”

Robin Zweydorff’s story is unbelievable. While he was bench-pressing, the barbell slipped and Robin lost the control over it. Loaded with 280kg/617lb, it fell directly on his forehead.

‘Both eye sockets were shattered, also my nose, my jaw… I had a skull base fracture. The doctors wanted to saw open my whole skull and reinforce the base of the skull with an iron plate. But in the end, only the eye sockets were reinforced with steel foils.

I had bad nightmares from that accident. The sound of the skull cracking, I dreamed quite often.

I didn’t faint when it happened, I was still able to experience everything. I was in the hospital for six weeks. After that I started exercising. First, I used light dumbbells for bench pressing. I waited half a year before I dared to exercise with the power rack with the safety stands. At some point I noticed my strength come back and I thought “I have to go back to the bench”.’

Robin explained that the guys from the West-Side-Barbell train with blocks to skip the lower part. He suggests that you buy wooden blocks from the hardware store and put them your chest. You start with a thickness of 12cm, then lower it to 9, 6, 3 and finally 0cm.

Furthermore, he said: ‘But to be honest, I never felt comfortable using blocks. So I have developed an alternative. To relieve the weight from the chest, I prefer to bench-press with chains. After a few weeks, when you stop using chains, you’ll notice that you have more strength in your triceps. I love the sound of the metal cleats. That’s what heavy training means to me.’ He recommends 6-8 reps.

The ‘valsalva manoeuvre’ breathing technique, commonly used in bench pressing, is dangerous, according to Robin. ‘I have twenty-six years of competition experience and have seen a lot. The vessels in the eyes can burst during heavy bench pressing, it has happened to me. I see nosebleeds all the time at competitions, the vessels in the nose are very delicate and can burst very quickly.

And if you have an aneurysm in your head, you can’t know that because it’s genetic. If practice improper breathing, then this kind of blood vessel can also burst. My recommendation is to always exhale during the positive phase of exercising.’

Warming up is important when pressing. Robin mentions his coach, Johannes Luckas, and that he has learned a lot from him. Robin’s warm up program:

(Note by site owner: I know some exercises are difficult to describe, so I will give you the timestamp, where you can see how to perform it correctly)

Tips from Robin: ‘Use a wide grip when bench pressing. If you’ve always pressed close, then use a slightly wider grip every workout, and increase the grip width centimeter by centimeter.

I have tried it with some of my clients, who benched close and then switched to a wide grip slowly. They have benefited and the feedback is positive, with some reporting strength gains of 20-30 kg.’

If you want to read more about Robin von Zweydorff, then leave a comment!