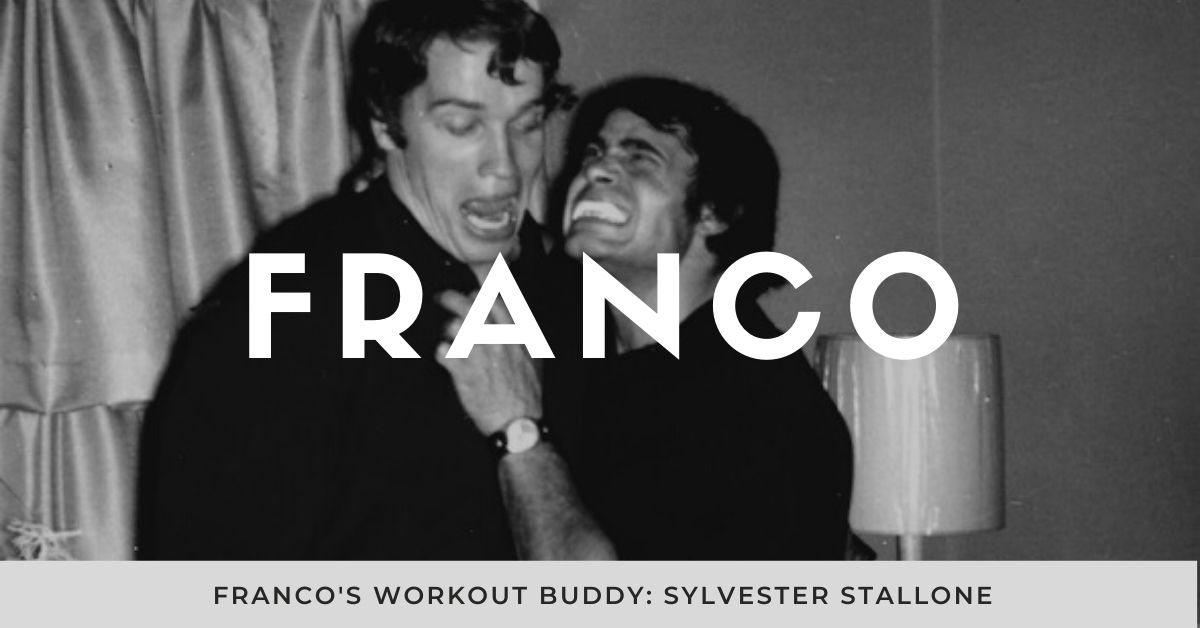 As the summer of 2019 came to an end, a tragedy occurred which shocked the physical culture world-the iconic Franco Columbo had died in his Native Italy swimming. Later that year, Rambo Last Blood opened in theaters to acclaim, specifically as to the condition that Sylvester Stallone was in to bring Rambo back to the big screen at the age of 70. What is the connection between these two occurrences? Franco and Sly created their lasting legacy, which was captured on film forever, by a training alliance that began in 1977.

According to an excellently written story in the South Florida Sun Sentinel, Sly met Franco in 1977 when he needed a chiropractor. The story was published in 1985 and explained how Franco trained Sly for his roles of Rocky and Rambo. Prior to working with Franco, Sly had a lean, athletic look but was certainly not muscular or defined as has become his trademark since beginning his physical culture partnership with the Sardinian Sampson.

Injuries suffered by Sly under the tutelage of Franco
Sly described in his book that he engaged in a bench press competition with Franco and tore his pectoral muscle which resulted in him changing the script for Rocky III to include Rocky changing his boxing stance from a Southpaw to a right handed fighter.

In a recent podcast, on the YouTube Channel Total Rocky– published on May 4, 2020-Stallone described that he got the extensive tattoo on his chest and shoulder was to cover up the damage he sustained from the pectoral tear.

I can recall being in high school in the 1980s and seeing pictures of Franco training Sly that would appear in the muscle magazines of the day such as Muscle and Fitness, Flex, Musclemag International and Muscular Development.

In the Sun Sentinel Article Franco described that he would train Sly differently for his role as Rocky as opposed to Rambo. “For Rocky, Sly wanted a lot of stuff in the shoulders and forearms so that when the camera came in it would look really big. So we did a lot of work on his upper pecs. But when we went into Rambo, he wanted that Oriental look. Stallone wanted that working, wiry look. He wanted to look muscular, tight like a jungle man. We did a lot of stomach work.”

Franco described to the Sun Sentinel the reason that Sly was successful: “What I did with him was write a training program that’s good for his body. But then I go to train with him, with his training program. That forces him to do his maximum. If he’s doing seven with 50lbs, I take 60lbs and do 10. Then of course, he has to do it. He’s so competitive, he thinks, No one’s going to get ahead of me.”

According to the Sun Sentinel, Franco and Sly got along well and “He (Columbo) laughs as he tells of Stallone saying that his knotty body looks like a fig tree.”

Two hours per day for 7 days per week, “Columbo would cajole Stallone into pumping greater and greater masses of iron.” Columbo received between $10,000 and $25,000 dollars for training Sly, but would not tell the writer the exact amount.

There is a short YouTube clips which show Franco and Sly training in California at Franco’s residence in California. A channel named Tony Montalbano shows a clip of Sly telling Franco he needs to focus on his shoulders and the back of his arm. The 49 second clip shows Sly doing a one arm short Barbell military press with a good weight- finishing the exercise by heaving the Barbell into the grass on Franco’s command. This clip ends with both men doing standing ab twists very aggressively.

For a tutorial on exactly how Franco trained Sly, there is a YouTube video entitled: Franco Columbo Presents the Official Rambo Workout, which was published on a channel entitled Ara Kevakian on 9/3/19, three days after Franco passed to Valhalla. The video has almost 300,000 views and shows the exact exercises, sets and repetitions of each movement Franco did in training Sly. Franco is quoted in the description box of this video with the following workout split that he created for Sly:

The workout demonstrated by Franco on this video begins with superset training for arms. I would estimate that Franco is approximately 70 years old in this video, he demonstrates each exercise with light weights, great form and a high, positive energy. A young man is put through the paces that Stallone would have done, back 30 years ago when they trained together. The reason for the “no rest in between” supersets according to Franco is because “We are training for definition, to lose body fat and get more muscular.” For range of motion he stresses: “Always all the way up and all the way down, no half exercises.”

Franco demonstrates two unique forearm exercises and stresses that if you have thin forearms you should do both exercises. After training upper body, your should flex your upper body muscles because that promotes additional growth as well as burning off body fat for better definition. Throughout the content, Franco stated that ten repetitions was the target goal for each set. Franco was famous for a massive upper chest, which he attributed to very high incline pressing. Double arm and single arm bent over dumbbell rows were modeled by Columbo, who was famous for his back development.

The workout concludes with some great abdominal exercises, during which Franco shows how coordinated he is and how Sly got those awesome abs.

End of their training partnership
According to Sly Moves, Stallone’s Book, Franco’s dietary protocol of a high yogurt diet made Sly fat so he stopped training under Columbo’s tutelage.