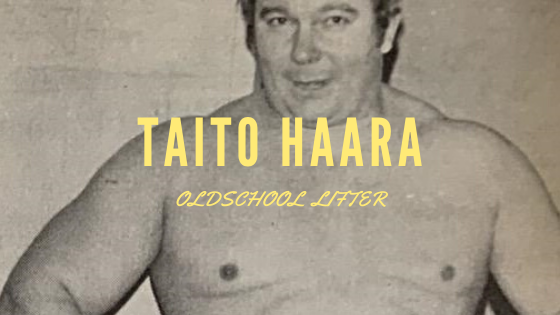 The following article was written by Terry Todd (published 1978 Jan). Use the tag-system for more great articles by Todd. – Berg

“One of the most exciting things about a world’s championship is the sight and sound of men from many nations mingling in the lobby of whatever hotel they happen to inhabit. To be in on the picture-taking, the verbal and non-verbal communication and the exchanging of addresses and routines makes an old dyed deep n the wool powerlifting fan like me almost terminally happy. The mood is a mixture of pre-contest tension, culture shock and simple euphoria and only a few truly unusual men have the physical presence to diffuse the mood and attract the attention of such a group of athletes.

Larry Pacifico and Ron Collins, of course, are two such men – both having become almost mythical through their years of victory – and when either of them enters the lobby all eyes are drawn to him. And naturally, when Don Reinhoudt lumbers majestically through, smiling and waving and being careful not to accidentally squash someone or knock the wall down, all conversation ceases. But other than Doug Young, with his unbelievable physique and his dark and brooding demeanor, no one else seems to be able to command the attention of a lobby full of national and world record holders and champions. At least no one had ’til last year when Taito Haara walked in, bearing his 280 pounds lightly and purposefully across the lobby of Hotel Yorktown.

Many of us, of course, knew of his great career in Olympic lifting – his two Olympiads (including the most recent one in Montreal), his silver medal in the snatch in the heavyweight class a few years ago and his many records in Scandinavia in both Olympic and Powerlifting – but we would have been impressed even so, because Haara really looked the part of a strength athlete as he moved with heavy grace toward the registration desk.

Face it – even those of us who understand, appreciate, and approve of a hiplock, borderline squat are still impressed by a rock bottom, narrow stance, flatbacked squat with a heavy weight. And that’s what Haara gave us.

After the contest, I spoke to Timo Kekkonen, another big Finn who often travels with the team and I asked him to take some training photographs of Haara and to get his routine and to send the material to me.

And so, a few days ago, when I walked up past the barn to my mailbox, I was pleased to find a thick packet of information and photos, postmarked from Finland.

It turns out that Haara is 34 years old and lives in the town of Lahti, where he is the chief constable. As a teenager, he trained in the summers on the javelin and in the winters on the skis.

At the age of 20 he got his first taste of iron, and he messed intermittently with the weight until he was 28, at which time, he began to train seriously on Olympic lifting. 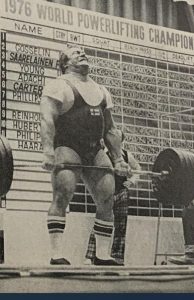 Partly as a result of a tendon he tore while snatching, he became interested in powerlifting, since for several months he was only able to squat and deadlift. Excited by the gains he was making, he entered a powerlifting meet and, at a bodyweight of 260, he squatted 683 1/2, benched 418 3/4 and deadlifted 716 1/2. This was in late 1973.

Prior to the 1976 World’s, his best total as a super was 1939 3/4, via lifts of 771 1/2 440 3/4 and 727 1/2. He made this total only one short month before the World’s (and less than three after the Olympic Games), so it seems obvious that, if he wished to, he can go far higher in all three lifts. And, according to my friend, Timo, he wished to.
Timo’s own words were, “Taito has been trained very short time powerlifting, but in order to train for Australia he trains very, very hard.”

His program is a good one – heavy and hard – and with it Haara hopes to reach a total of 1050 kilos (approximately 2315) at the World’s Championships in Australia. In Order to do this, he plans to increase his bodyweight between 35 and 50 pounds. Prior to the 1976 World’s, he followed the program listed below.

Please note that he begins each workout by training in one of the Olympic lifts.

The hard working Finn plans to use this same approximate program before the ’77 World’s handling substantially heavier poundages He feels that powerlifting routines should be simple and that great care should be taken not to miss workouts and to keep the level of enthusiasm high.

Haara is 5’10” tall and at a bodyweight of 280, his arms are 20 1/2″, his thighs are 30″, and chest is 57″. As you can imagine, he loves to eat and he consumes between one and two pounds of meat every day, plus potatoes, cheese, black bread and a gallon of raw milk. He also takes calcium tablets and protein powder, ingesting a total of between 7000 and 8000 calories each day. He works hard in both his job and his training, yet he gets by with seven hours sleep each night.

Although he has decided to concentrate on powerlifting, he still loved the Olympic lifts and he wants to do an 881 3/4 total before he quits. This might break down as a 380 1/4 snatch and a 501 1/2 clean and jerk – both truly heavy lifts for a non-specialist. If he reaches these poundages and can add to them his goal of a 2315 powerlift total, he would almost certainly be the strongest competitive athlete in the world. Had those of you reading this been there last year at York to see this big man lift and to watch the heads of the world’s greatest lifters turn as he strode through the lobby, you wouldn’t bet against him.”