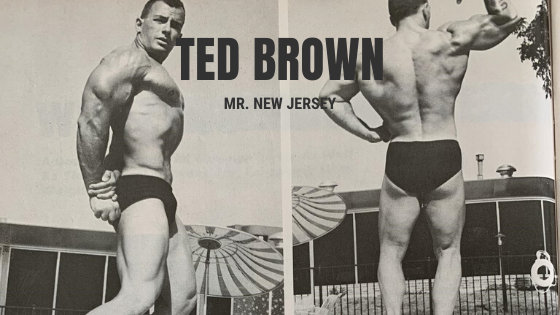 “When ted Brown was interviewed for this story he had just won the best arms subdivision at the big Mr. North America show held here in York. Before we could get the exercise pictures taken and developed he had gone on to win the Mr. New Jersey and Mr. garden State titles. The rapidity with which he won these titles is descriptive of his career as a physique contestant. It wasn’t until Thanksgiving of 1964 that he started to train with physique competition in mind.

Since that time he has made continual and rapid progress, looking and placing better with each contest that he entered. However, ted’s weight training goes back further than Thanksgiving of 1964. In fact, his story is fairly remarkable. 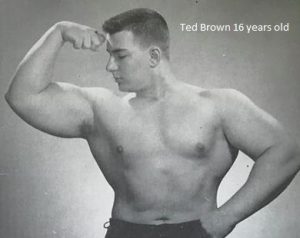 Ted started weight training at the age of 13. he was thin and wanted to gain weight. Some friend had a set of weights. Ted’s desire to gain weight and the availability of training companions and equipment was all that was necessary to start him training. After seven years of hard training Ted had bulked up to 240. Circumstances changed about this time and he took a layoff. He was 20 years of age at this time and at the start of his lay-off. Then he started to gain weight and went up to 300 in about six months. Now the tables were turned and Ted started dieting and doing some exercising, although he admits that it was mainly a case of not eating, in an effort to lose the excessive weight.

The results were amazing. In about nine months he reduced to 178. Then two years ago came the decision to start training for physique competition. he has already won a state title and placed near the top ibn many of the top contests. Some progress! And his formula for success? All he did was apply proper diet, desire, and a basic barbell routine plus the catalysis that makes the difference between staying in shape and obtaining an outstanding physique – hard work.

At present Ted trains alone in his basement gym six days a week. He follows a split routine, working the upper body on Monday, Wednesday, and Friday and the legs and lower back on Tuesday, Thursday and Saturday. He works his abdominals everyday. Ted plans his routine around this basics idea: One exercise per body part performed 8-20 sets. He likes to stay with one exercises for lesser number of sets. As Ted put it, “I am a slow starter so once I get going on an exercise I do better by staying with it for awhile.” 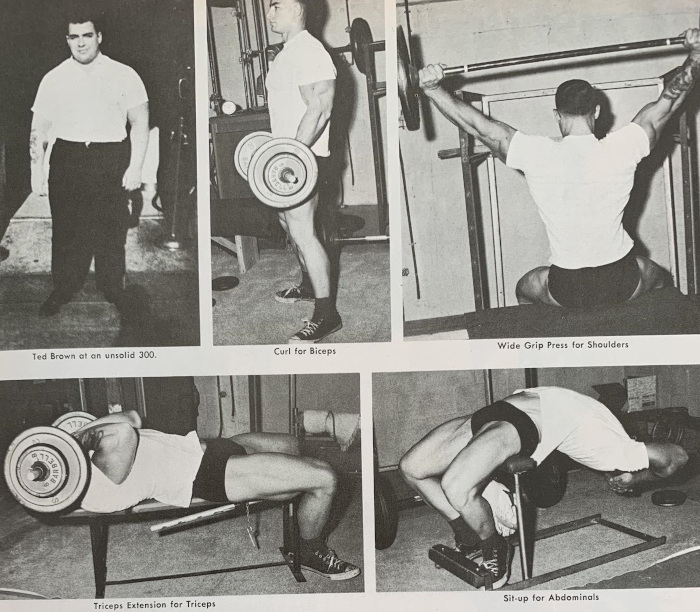 As mentioned above, Ted trains at home in his basement gym. Each workout averages three hours and he rests about three minutes between each set. Training three hours a day requires a good diet to supply the nutrients necessary for muscle growth. To supply these nutrients Ted eats considerable amounts of protein rich foods – hard-boiled eggs, cottage cheese, meat, etc. He avoid carbohydrate rich foods such as bread, sugar, and potatoes. To make sure that his diet is adequate he regularly takes vitamin and mineral supplements and one or two cups or protein powder mixed with grapefruit juice.

About three weeks before a contest Ted reduces from his usual bodyweight of 210 to about 195. To accomplish this he cuts down on his diet and speeds up his training. He doesn’t concern himself with the amount of weight he is using, but rather concentrates on working fast with less than one minute between sets.

Ted is 24 years old and lives in Hawthorne, New Jersey. His ambition is to develop the best build possible for himself and, of course, to win the Mr. America title. All we can add is that he is well on his way.”