The Amazing Story of JOHN FARBOTNIK 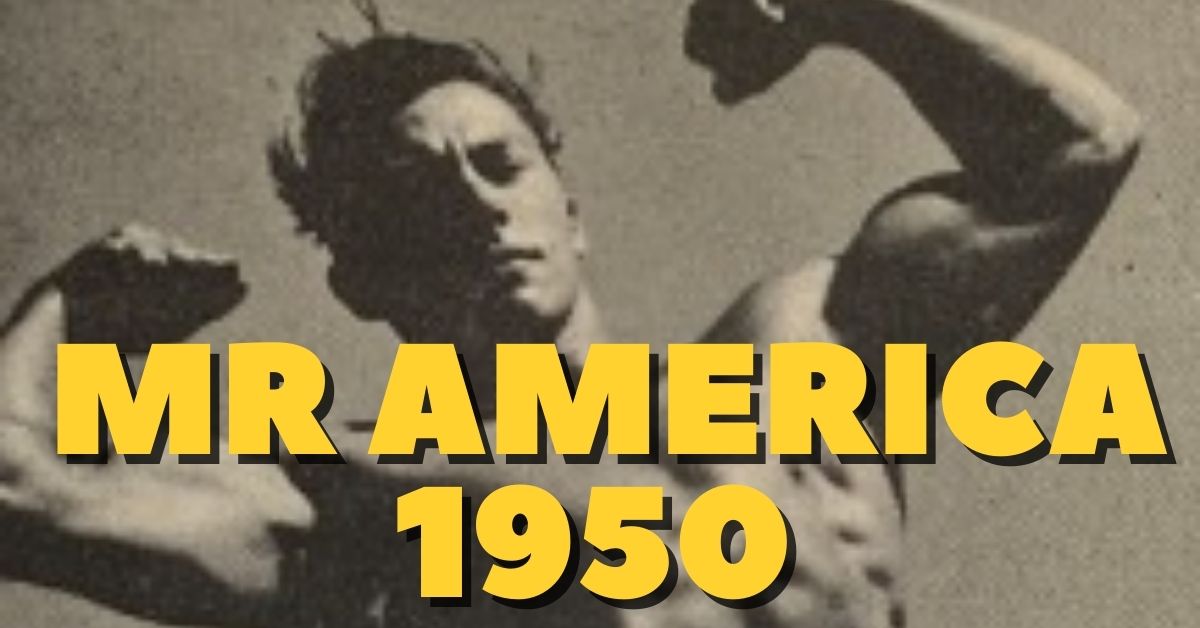 If you are a bodybuilding enthusiast you have already heard about John Farbotnik. During the year 1946 he entered competition for the first time in his life and won “Best Chest” in the Mr. America Contest against the best buiklt men in the country.

This was the contest in which Alan Stephan won the Mr. America Title. In addition, he took a fifth a place in the contest as a whole, which is good in any man’s language, for the first year in competition. He also got a third place for best arms and third for best back. During the same year he won the Mr. Chicago Title. Quite a record for a beginner who wasn’t known outside of a limited circle of body-builders. 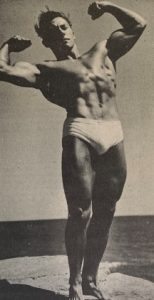 Nothing to rave about, you will agree, but John had made up his mind that he wanted to possess an above average physique and he went to work with a will to succeed. Not knowing just where or how to start he bought himself a set of cables and did nearly all of his exercising within the confines of his own bedroom.

So diligently did he train that he made progress beyond all expectations. Even experienced barbell men did not believe that so much could be accomplished in so short a time with cables alone.

Sheer will-power and terrific physical exertion were primarily responsible. At the end of the four month period his arms were two inches bigger, his neck an inch bigger, his chest four inches bigger and so on. His exact measurements were as follows:
Arm 15″
Neck 15″
Chest 41″ N- 43″ Ex.
Waist 30 1/2″
Thigh 20 1/2″
15″

At this time John Farbotnik was still at high school and one day during a football game he got clipped from behind, tore his right quadriceps (the big muscle of the thigh), and some of the important ligaments and spent several weeks in the hospital.

For some months following this he did not have the full use of his leg and as a result the muscles astrophied two inches.

Johnny took to weight training at this stage of the game in a desperate attempt to regain all that he had lost. His doctor made him stay off of the leg until the initial injury had healed, and then started a slow and painful process of retraining.

The leg muscles had to be stretched gradually and re-built by easy stages. It took time, but the results were worth it, for John not only regained full use of his right leg, but on taking his measurements, found that now the right leg was actually bigger than the left.

So effective had Johnny’s training scheme been that when inducted into the army in 1943 he passed all of the rigorous tests and qualified for training as an Aviation Cadet. He more than held his own in the rigid physical training course which followed. Even the weekly five-mile crosscountry runs did not wash him out. Nine months later he was transferred to a gunnery school in Texas and here started a new form of training.

By this time John was in better condition than he had ever been and his body was beginning to show definite signs of progress. Once again however , Fate stepped in via an unfortuante accident and Johnny ended up in a hospital with a completely fractured and displaced bone in his left foot.

An operation was performed, the foot tied with gut to prevent displacement, a cast placed on the foot and twenty-one days spent in bed. After two-and-a-half months the cast was removed and though the foot was healed the whole leg had atrophied from the inactivity. Besides the loss in size of calf and thigh Johnny had suffered a loss of strength and bodyweight and his tough physical condition had degenerated.

There followed another period of recovery through physical training and soon Johnny was back with his outfit again but after a short while was transferred to a parachute training unit. Not quite recovered from his latest misfortune, and probably due also in part to his previous injuries, Johnny’s right knee became dislocated during a particularly strenuous session.

On recovery from this accident Johnny was transferred to restricted duty not involving the use of his legs, and once again began serious training to regain his health and strength and physical development.

After nine months of steady training with weights he noted great improvements. His weight had increased by 35lbs; he could use his right knee in all exercises; he could perform 15 squats with 270lbs. and ten squats with 300lb. A truly remarkable recovery for a man who had so many setbacks of a serious nature.

Then came a furlough and Johnny spent most of it in Johnny Fritish’s Gym learning something about the more scientific aspects of progressive bodybuilding.

Once again feeling and looking better than he ever did before, John Fartbotnik left left Chicago on an 1800 mile train trip for his training center. Less than five hours later the evil fate which had dogged his footsteps for so long, struck a vicious blow in the form of an acute attack of appendicitis. He was taken from the train and rushed to a hospital for an emergency operation. This was performed immediately and his vigorous body started on the road to recovery but Dame Fortune had deserted him completely, for within ten days he had severe attack of the dreaded ameobic dysentary. The struggle for life which followed lasted for twelve days, and though Johnny pulled through, he had dropped twenty-five pounds in bodyweight.

Needless to say he felt pretty discouraged about this, but one day a Capt. Thomas DeLorme, whoi was attached to the hospital in some special capacity interviewed Johnny and outlined for him a course of physical therapy.

This marked a new era in the life of John Farbotnik for he foud in Capt. DeLorme one of the greatest experts in physical therapy in America and through him the most amazingly equipped gymnasium he had ever seen in his life. In almost no time at all Johnny was back on the road to recovery and he so impressed Capt. DeLorme that the latter requested him to stay on as an instructor. Johnny was only too pleased to accept and was soon helping to restore hundreds of war wounded veterans to the health they longed for. He says that he learned more about the humand body here than he had ever dreamt existed and that no gymnasium he had ever seen, heard of a read about could begin to compare with this one.

Though Johnny spent most of his time helping others, his own body soon came back to normal. It was about this time that he read something about the coming Mr. America contest and, though he knew that he couldn’t hold a candle against any of those who would be entered, so far as his present physique was concerned, he started out in earnest to train. The contest was only a few months off but this did not deter him.

He set for himself an ambitious system of training and adhered to it day after day, week after week, throughout the whole intervening period.

You know the results – best chest, third best arms, third best back, fifth in the contest as a whole, and a little later, the Mr. Chicago title.

Incredible you will say – but that is exactly what John Farbotnik did. Here are his present measurements – compare them with those which preceded his lengthy cycle of misfortunes.

Johnny says that he received a lot of inspiration from Jules Bacon, Bill Fischer and John Fritshe. When asked what his favorite exercises were he replied:

“My favorite exercises are the two-arm circular flying exercise on the bench and the Iron boot quadriceps exercise. I believe that the flying exercise was mainly responsible for the size of my rib box and for my pectoral development.”

Johnny started this exercise with fifteen pounds and gradually increased the amount until today he can use fifty-five pounds and do as many as fifteen repetitions. In oder to take some of the strain off of the elbow joints, and to place more work on the biceps, he bends his arms at the elbows about five degrees. He takes a deep breath on the backward and downward movemewnt thus giving his rib box a terrific stretch.

Johnny ambition is to develop his body to its maximum limits and to eventually posses his own barbell studio. He is already well on the way to accomplishing both of these and will undoubtedly see his ambitions fully realized.

Such is the gripping story of John Farbotnik. What he has done not every man can do for the simple reason that every man does not possess his tremendous will to succeed.”

2 thoughts on “The Amazing Story of JOHN FARBOTNIK”