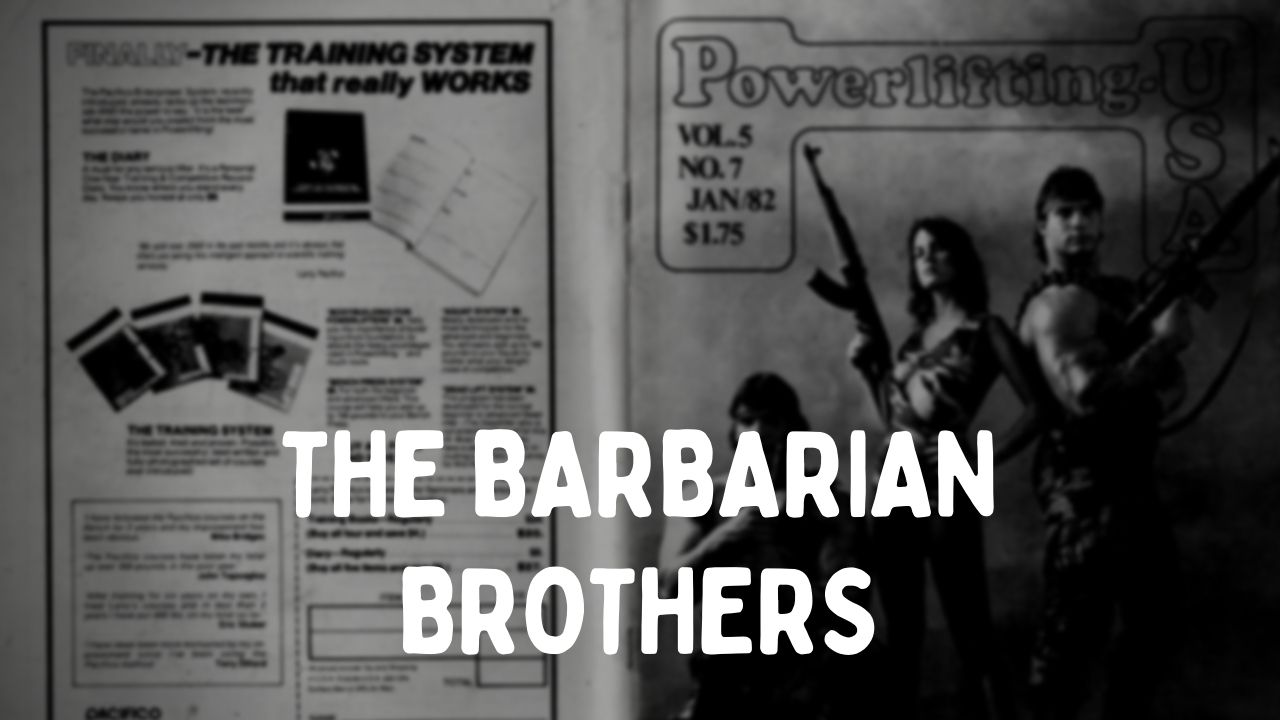 This past weekend, two brothers did very well at the World Strongest Man contest with one winning and another in the top 5. This had never happened before and got me thinking about famous brothers in the world of muscle building and physical culture. In the 1980s, two brothers from Rhode Island took the bodybuilding and physical culture World by storm the Barbarian Brothers, David and Peter Paul. The Paul brothers were fraternal twins. These two gentlemen, with their powerful builds, good looks, sense of humor, and personalities were everywhere during the eighties to include movies such as DC Cab, Hotel New Hampshire, Think Big, Double Trouble and the Barbarians – a Conanesque style cult classic. All of the muscle magazines and muscle building books of that ear had incredible photos of the huge weights that the brothers were blasting in regular training sessions or exhibitions.

In addition to in print, the brothers made an appearance in music video for the number one hit “Devil Inside” by INXS as well as on the most popular Television talk shows of the era such as Regis Philbin. Another clip on YouTube shows the brothers perform their raps to a pair of interviewees named Steve and Gary, a Chicago based talk show called the Midnight Hour. The two appeared on the Wil Shriver Show for an edition entitled the sexiest men in America. To enter the show, which can be seen on APF Judge’s YouTube channel, one of the brothers walks on his hands on to the set when they are introduced. That is no easy feat at over 250 lbs of muscle.

On the Shriver Show interview, the explanation for their name was given as having been bestowed upon the brothers for the way they train in the gym, “ a Barbarian doesn’t think, they just react to the situation.” In an interview panel on RX Muscle’s YouTube Channel following David’s passing in 2020, Greg Valentino, John Romano and Dave Palumbo describe how strong the Barbarians were at their peak in the 1980s when Golds Gym Venice Beach California was their training home. Romano detailed how there were certain specific heavy duty pieces of equipment at the gym that were labeled Barbarian in honor of the brothers and the massive weights they handled. Valentino elaborated that the brothers were not overly strong in the squat or deadlift, but they were renowned for reverse grip bench pressing 500 lbs or curling 150lb dumbbells.

The Regis Philbin clip on YouTube is interesting because you can see the Barbarians behind the neck press on one of their specialty benches, while famous bodybuilding psychologist Peter Siegel adds commentary. Both brothers do a repetition with 315 lbs behind the neck without sufficient warm up. On the Gary Shandling Show, also on YouTube, one of the brothers easily curls a 75 lb dumbbell with the strictest of form, alternating each arm. David goes on to attempt a 550 lb reverse grip bench press that he handles well, but needs assistance from Peter to lock out. Peter does standing alternate cheat dumbbell curls with 150 lbs and he does 6 with each arm. There is no way to tell if these weights are real, but based upon how the brothers lifted these weights they appear to be. This Shandling show clip is on the APF Judge YouTube Channel.

The best YouTube clip of the Barbarians is on Claudio Fresin’s YouTube Channel and is entitled Barbarian Brothers from Golds Gym Venice. This video is from a famous exhibition the brothers did at the Anaheim Disneyland Hotel in 1981. David does an easy 405 lb reverse bench press, then comes back to reverse grip bench 500lbs after missing it.

Peter does 4 good repetitions with 315lbs behind the neck. During the 1980s the behind the neck press was very popular and it was championed by Ted Arcidi, the first official 700lb bench presser. Next on the clip, David does a few seated military presses with 150lb dumbbells, which Peter then uses for alternating cheat curls. David is seen attempting a 315lb cheat curl unsuccessfully but then with 225lbs the crowd counts out a 17th rep! The clip shows what appears to be a squatting exhibition, but it is just a glimpse and the viewer can not make out the weights lifted.

The brothers had the honor of being on the cover of the January 1982 cover of Powerlifting USA Magazine. They did not disappoint in this article by paying proper homage to powerlifting and the greats at that time such as Kazmaier and Bridges. The brothers did not claim to be the strongest men at the powerlifts, only in the heavy muscle building movements that they would exhibit for all to see.

On the Shriver show, the Barbarians claimed they would eat three whole food meals per day in addition to two egg shakes per day to supplement their caloric requirements. They demonstrated making the egg shakes and said that they would use the whites of 12 eggs, mixed with protein powder, yogurt, wheat germ, and orange juice.

By all accounts of people interviewed who knew the Barbarians, they were fun loving and mischievous gentlemen, not bullies or tough guys.

After their competitive days ended, David became a world class photographer. Peter created and developed a book, video, and cd series for children to address the issues they face in growing up. I saw one of the Barbarian brothers at the 2003 Los Angeles Fitness Expo, but I did not take a picture with him or speak to him. I would much rather remember him when he captured the imagination of the entire lifting world, not when he was long out of the game.