The Biceps and Its Characteristics 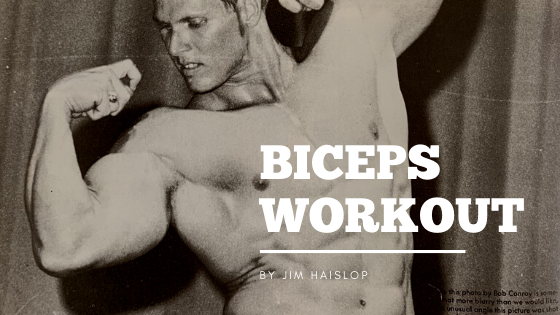 The following bicep workout was developed by bodybuilding legend Jim Haislop in the year 1969. – Mr. Berg

“More time is spent on bicep curling than on any other group of exercises. It is a bodybuilder’s greatest desire to increase his bicep measurement over all other body parts, for every bodybuilder wants a large and highly peaked bicep. Even those who do not participate in weight training of any kind will notice someone with large biceps.

The biceps are on constant display when a short sleeved shirt is worn and therefore they are the most noticeable of all muscle groups.

I know some bodybuilders who will actually stop all training, other than curling movements, for as much as one month. This they do in hopes that their bicep size will increase. The idea behind thid method of training is that the biceps will receive all of the body’s rebuilding sources when trained alone. With this in mind you can see that the big bicep craze is always present in the modern physiques.

I personally believe that no body part is worth improving when I have to completely neglect any or all of the others. I will, however, specialize on my biceps by adding another set and another exercise to my bicep routine.

When I stop and think back on past articles I’ve read I’ll have to confess that I have seen more articles on bicep development than on any other body part. It seems as though everyone desires the secret to bicep development. While the right methods of training will increase your bicep size, you must take into consideration your heredity. There is always an exception to the rule but most people with big biceps had fairly large arms before they began training.

If you start bodybuilding with a thirteen inch arm you can expect to attain approximately an eighteen inch arm. This first measurement of course is taken after you have stopped growing as a youth. An increased size of about five inches is normal provided you really work hard throughout your years of training.

This increased size is about the maximum for the bodybuilder with normal body characteristics. Some people will exceed this measurement while others will not come close to it. Bear in mind that this is with a well balanced body weight.

Almost anyone can surpass these measurements by gaining a tremendous amount of fat, but this is not what you are striving for. Be sure to maintain a good degree of muscularity while trying to increase your bicep size. Later it is extremely hard to lose excessive bulk that you obtained while striving for a bigger bicep.

If you have tried bulking up along with your bicep specialization, you have found that when you reduce bodyweight you also lose arm size.

Another thing I have noticed is that a beginner with a hard muscular arm will not achieve the arm size of a person who starts out with the same size arm of a softer nature. It is true that the biceps need plenty of good hard work to develop them properly but it is not true that the more you do for them the bigger they will be.

I know of many a trainee who works his arms twice as hard as the other gym members yet does not receive the same results. This is another factor that is derived from heredity. While you may not receive as large a bicep as you desire, you can improve. Your improvement will be based on enough proper training along with your diet. Let’s face it, you can’t build biceps on potato chips! You must include in your diet the needed protein for muscle repair.

Beginners are more guilty of doing too much bicep curling and neglecting the other body parts, than the advanced trainee. Three exercises of three sets is sufficient for a beginner. The advanced bodybuilder will do as any as four exercises of five sets to an exercise.

This is fine, provided no other body part is neglected. I have done as many as twenty sets when preparing for an exhibition or contest. I find this beneficial for a short period of time, but I normally stick to three exercises of six sets each. These three exercises are all basic and done with maximum weight that will allow strict form at all time. Some bodybuilder do from twenty-five to thirty sets for biceps but these sets are super-setted with a reduction of weight.

This method is done when specializing on bicep development and should be done for a short period of time only.

It is important that you change your bicep routine periodically so you will not get stale on a series of exercises. You may lose a little site when you first change your routine. You will soon make up this loss in size and will continue to receive added growth. I change my bicep routine about every three months if I am deriving little benefit from an exercise. if I am making good progress with an exercise or series of exercises I do not change it until I am in a state of staleness.

Do not perform all your curling movements from one angle but use a variety of angle and training apparatuses. I find that by mixing up my bicep work with straight bars, dumbbells, cables an special curling equipment I enjoy my arm work much more.

If you train in a gym it is to your advantage to utilize the different types of equipment provided. I know you probably like to stick to an old favorite exercise, but there are so many methods of working the biceps from every angle that it is foolish to use only one.

The biceps, like triceps, should be trained at the end of your workouts. This will leave strength in them to perform an adequate workout on the preceding muscle groups. Don’t be discouraged if you can’t handle as much weight as you could when you attacked the biceps at the beginning of your training session. Naturally you will not be able to use a heavy a poundage but your decreased weight will still act on the bicep in the same manner.

Be sure to warm up your biceps with a couple of light sets before starting your bicep routine. This is extremely important for biceps even though they are not a large muscle groups but neglect warming up before going  into heavy curling. This can, and will eventually result in damage to the lower bicep insertion at the elbow.

There are more methods and machines for obtaining bicep development than any other body part. Naturally I don’t have space to explain all of these but I will relate to you the ones I have received the most benefit from. 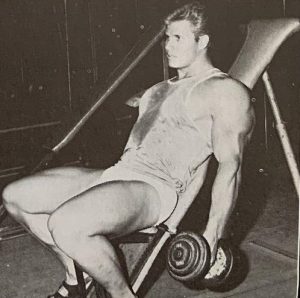 The incline dumbbell curl is my favorite bicep exercise. The incline curl provides a stricter movement than most other variations of curls.

It is designed to keep the bulk of the body stationary allowing only the arms to be worked while curling. This type of curl is best performed on an incline of forty-five degrees from the floor.

Choose a pair of dumbbells that will allow you to do from six to eight repetitions without swinging the weight from the shoulders. Be sure to go all the way down so that the lower bicep will be worked thoroughly. On the upward curling movement bring the dumbbells up as far as you can without moving your upper arm. Do not bring the weight all the way up to the back of the trapezius by swinging your upper arm.

This type of movement is of no benefit and is only depleting you of needed energy.

E-Z Bar Curls, standing position
I favor it, as opposed to the straight bar, because my hands are in a more normal position. This gives more comfort to the wrist than the straight bar. Remember to keep your back straight at all times, as this places all the work on your biceps. 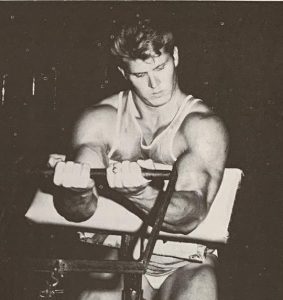 This type of curl gets its name because it is done over a bench resembling a pulpit. Cables from all angles, dumbbells and barbells can be employed while using the preacher bench. I favor a cable from a floor pully in this type of movement. When doing this exercise in the former manner the lower bicep is worked to its best advantage.

If you do not have a special machine for this type of curl you will need a training partner to stand on the back of the preacher bench. This will prevent it from tipping over as you increase the weight. 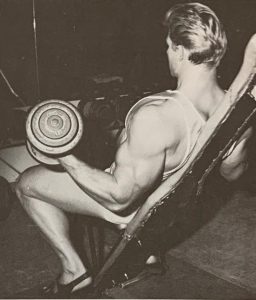 The concentration curl is usually done while seated. This variation of curl is performed with a single dumbbell and should be done at the end of your bicep routine. It is not designed to be done with a heavy weight. Be sure to do each repetition slowly and deliberately, always completing movements and tensing the biceps at the top of each repetition.

Concentration curling, if done correctly, is great exercise for peaking the bicep, and should be included. It is primarily for shaping, rather than for bicep enlargement.

If you have not been making progress and are not satisfied with your present bicep routine then a change of exercise is due. Choose some, or all, of the above outline exercises and let’s hope that you are on the way to new heights in bicep development.”