Americans vs. Brits, The First International Meet 1970
September 1970, the Embassy Auditorium in Los Angeles hosted what was described as ‘the first international powerlifting meet ever held’. 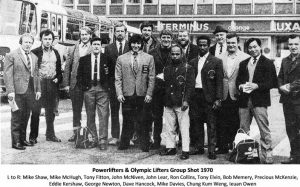 The British-US Power Meet was held at the Embassy Auditorium in Los Angeles on September 19th and was the fruition of much hard work and planning by Tony Fitton, the 21 year old head of British powerlifting. After Tony contacted Bill “Peanuts” West and expressed his desire to arrange an international meet between the Brits and Americans, local powerlifting star George Frenn took it upon himself to arrange and promote the meet.

With Wayne (of “Superstar Billy Graham” fame) Coleman announcing and Joe Weider providing travel funds for the Brits, it promised to be a spectacular event. 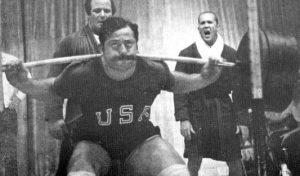 George Fenn squatted a new American record 819lb in the 242lb class. His 819lb surpassed the superheavyweight record set by men weighing 100lb more than Frenn! George is also a world class hammer thrower and was the current National AAU champion. He was also a teacher in the Los Angeles City School District so his training was limited. George was also the meet director. You can imagine how hectic it can be to hold and organize such a big meet. 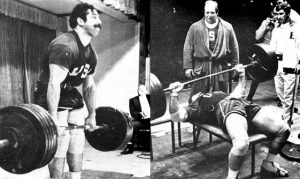 George started with 440lb benchpress and it went easy. But his second attempt with 465 went very slow and hard. He did not take a third attempt. In deadlift he started with 720lb. After that he tried deadlifting 785lb but he failed. He failed two times! His first squat 730lb. He squatted deep down and came up explosive. His second attempt with 780lb went also easy. George asked for 815lb (which weighed 819lb) and made it. 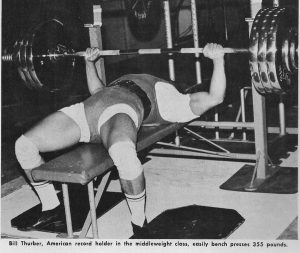 From halfway around the world came some very talented opposition: Ron Collins, Precious McKenzie (who would also compete at the IWF Worlds), McHugh, Mike Shaw, and Eddie Kershaw among others, several of whom would set lifting records that day. When it was all said and done, three Americans had bombed out and the Brits handily defeated the Americans.

Record setting performances aside, not everything came up smelling roses at the Embassy Auditorium. According to Tony Fitton (who not only judged but actually stayed at meet director George Frenn’s residence while in LA), there were a few “irregularities” that bear mentioning. For example, the “star” of the meet weighed 20 lbs over his class limit the night before but was never required to make weight! In fact, according to Tony, only the British lifters had to make weight that day! Then there was a judge named Bob Packer who was given the boot by Frenn for throwing too many reds! He’s the guy that Tony replaced.

The judging was inconsistent: many squats were high (one notable exception being Frenn’s), many of the benches were bounced with butts in the air, and miles and miles of bandaging were ignored.

This is how things were apparantly still being done in parts of California, far away from the scrutiny of the AAU-Hoffman camp.

Despite its problems, the British-US Power Meet was particularly significant as a call to action for Bob Hoffman and his AAU cohorts.

Bob Hoffman made big plans to host an international event in 1971 that would pull the rug out from under Weider’s feet! 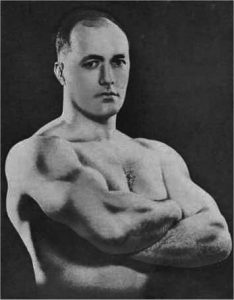 Joe Weider played a big part in the First International Powerlifting Meet held at Los Angeles Embassy Auditorium. Bob Hoffman had seen a lot of changes during his long lifting patronage, chief among them the rise of American weightlifting after WWII and its zenith during the mid 1950’s. 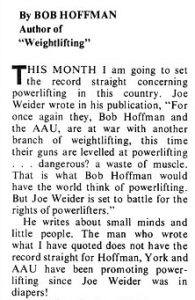 With the decline of American weightlifting during the 1960’s / 70’s and the ascendence of Weider’s sensationalistic brand of bodybuilding, Hoffman had little choice but to fully embrace the only “winning” game still left to his beloved AAU: the relatively young sport of Powerlifting. But Weider wouldn’t relent, even in that fledgling strength arena: He had George Frenn and Bill West penning power articles for him. He took every opportunity to criticize the AAU’s treatment of powerlifting and Bob Hoffman (see above). As it had been since the late 1940’s, it was still a matter of pride for both men to upstage each another – witness Weider’s sponsorship of the 1970 LA International meet and Hoffman’s forthcoming reaction.

Hoffman would have his first official World Championship meet in 1971 even if he had only the AAU to sanction it. As he loudly proclaimed in Muscular Development, this epochal event would occur in York Pennsylvania and timed to coincide with his birthday.

Powerlifting gained additional prestige with the First World Championship in 1971, also held in York. A huge credit should be given to Bob Hoffman for making the first World Powerlifting Championships a reality!

198 lb class Vince Anello vs. Larry Pacifico vs. John Kanter
Vince pressed 360lb, grooved 380lb, but barely drove 385lb off his chest. His squats were smart choices, and got all three: 550lb , 575lb, then 590lb. Even with his tremendous Deadlift he was too far back to overcome the deficit. 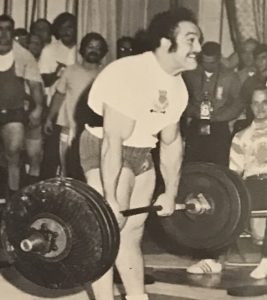 Vince humped up to 750lb (above picture), jumped to 800lb, and got it knee high. On his final try with his stiff-legged, round-back style, it didn’t budge. He got third place at 1720. 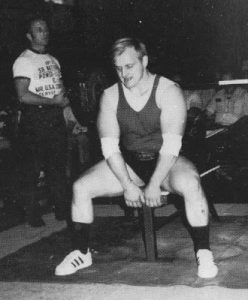 John Kanter benched 460lb, but there was a butt raise. His repeat went. Then he tried 475lb but it was too heavy.
Larry Pacifico opened with a 625lb squat. He came back for 660lb and made it. John Kanter squatted 660 and 680lb. In the third attempt he was stuck on the bottom with 700lb.

Both men had identical super total of around 1140lb. Larry had the advantage of being the lighter in body mass. Kanter opened with a 650lb deadlift, but couldn’t get his shoulders back, thus no lift. 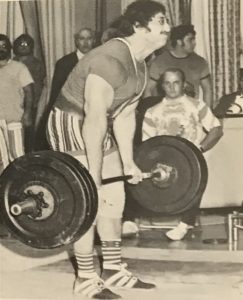 Larry took the same poundage and got it. He increased  to 660lb and it went easy. Larry lifted the same weight and thus they had the same total, 1800lb. But Larry was the lighter man and he won. 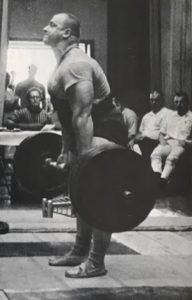 In the final attempt John Kanter tried deadlifting 680lb but he couldn’t ripp it off the floor. Larry had won the title and did not try his final attempt in the deadlift. 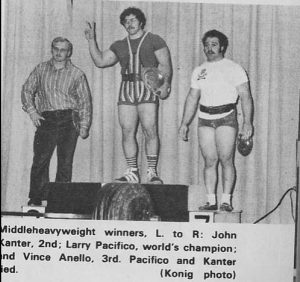 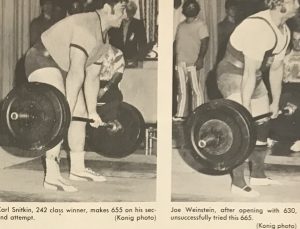 Snitkin began at 420lb. Joe opened at 435lb. Carl duplicated that weight with his second. He tried 440 which fell short. Joe leaped in front with a well executed 450lb. He tried 460lb, and it was a close miss. The order reversed after that. Weinstein dunked his initial 630lb. He sat shallowly with 650lb, and also carried the bar too far down his back – no lift. His final try also was nullified for insufficient depth. Snitkin eased himself into the driver’s seat: 630lb, 670lb, 685lb – all acceptable lifts.

Snitkin had a 40lb supertotal advantage. To begin the pulls both men cranked up 630. Snitkin extended his lead with 655. Weinstein attempted 665lb, but it was incomplete, so he walved his third (1710 total) and had second place. Snitkin, having already won, tried 665, which remained grounded.

Only USA men entered. Jim Williams from Scranton and John Kuc, of Kingston. They were joined by Joseph White, from Columbiaville, NY and the present Senior champ, Hugh cassidy, from Oxon Hill, MD.

Don Cundy was also there. He was a triple Senior Champion (1968-70). He even skipped the Seniors in 1970 to prepare for this competition. 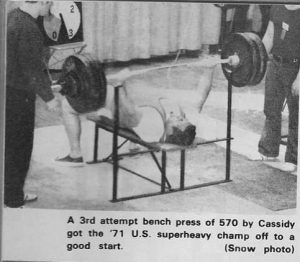 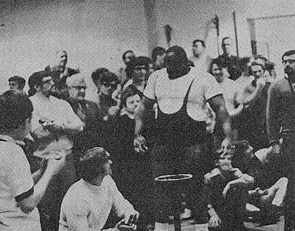 The Scranton “Superman” or “Bear”, who had the biggest benchpress. Jim Williams was in this time the american record holder in the Bench 628lb. He opened with 630lb and blew it up. This stirred the crowd. He increased to 660lb. It was slower to complete at the top. The crowd chanted for 700lb. Jim took 680lb. Up it exploded and stopped just shy of a lockout. Every was wide awake and alert after that. 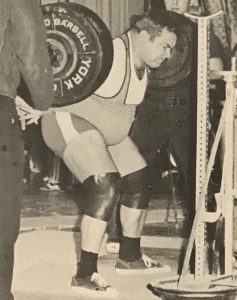 All were strong in the Squat. Don Cundy made 700lb, 740lb but couldn’t complete 760lb. Joseph White came in at 760lb, got dizzy and failed it. He lost his repeat, when the three minute time limit expired on the clock. Joseph increased to 765lb and made it to stay in the hunt. Hugh Cassidy (see above pic) sat way low and roared up with all three: 750lb, 780lb and 800lb.

Jim Williams cruised thorugh his first two lifts: 780lb, then 800lb. He handled them like toys. He was far out in front on subtotal (1460), 90 up on Cassidy. Believing he had a safe enough lead, Jim bypassed his final lift. It proved to be a big tactical error. 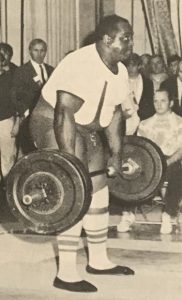 Jim Williams deadlifted 675lb, then 700lb easily but he missed 720lb. It came off the floor easily but at the lockout it stopped abruptly. Jim’s total 2160lb.

The two others had to pull enormous weight to chase Jim Williams. 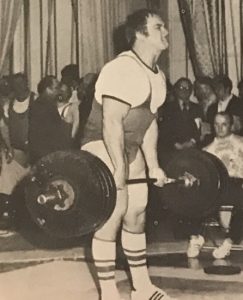 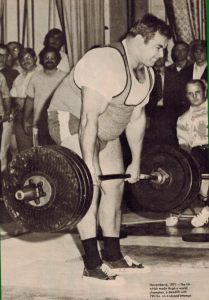 The big surprise occured. Cassidy pulled out all the stops, jumped straight to 790lb. During the lift someone from backstage ran right out onto the platform to shout encouragement to Cassidy to make the lift. There was so much excitement that they didn’t have time to eject the intruder. When the bar snapped into lockout position, the lights flashed! Three whites. 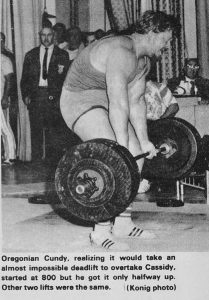 The meet continued: Cundy opened with 800lb, and humped it knee high, with none completed in all 3 tried, and he was out of the contest. 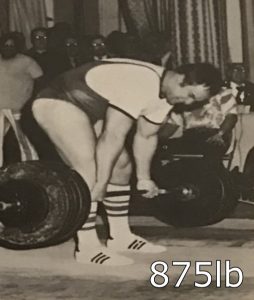 John Kuc was going to unleash his mighty weapon: the deadlift. He lifted 820lb and had a total of 2105lb. Kuc decided to try to win it all. The bar was loaded up to 875lb. The crowd went nuts. When he approached the bar, it became DEAD SILENT. The enormous weight broke the grasp of gravity and inched upwards. Everyone held their breath. At knee height it hesitated, wavered, and crashed back to the platfrom. The crowd erupted into tumultuous roar. Hugh Cassidy was the champion and not Big Jim Williams 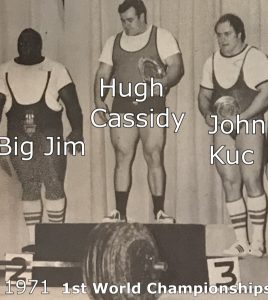 This powerlifting meet was the milestone for the popular sport we know today as POWERLIFTING.

Bob Hoffman and his team and troubles to held this competition in “William Penn Highschool”. The national championships in 1968 was held there too. Damage was done to the stage. There was such a huge crowd, hundreds standing that Hoffman barred from there for 3 years.
Don Schlosser and Eichelberger their Assistant Mayor had to bat for their that they got William Penn auditorium for this contest.

This competition turned out very well. They had more than 200 people present. They were standing in the aisles, and many were find seats, and many were sitting up front taking pictures, but most were just watching.

Hoffman and this team tried hard to make it a truly international event, but there only two countries were represented. It seemed Powerlifting was at this time a poorly represented world sport.