The Lost Art of Teeth Lifting 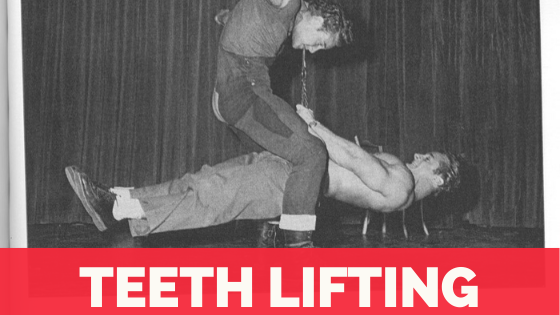 The following strongman stunt is very oldschool; lifting with your teeths. In the thumbnail you would see Steve Reeves, 1947 AAU Mr. America, at the Los Angeles Woodberry College, performing a teeth lift with his friend, 210-pound 1948 AAU Mr. America, George Eiermann.

In this article you will learn how to proper lift with your teeths. The following philosophy of lifting with teeths is based on Hugh Cassidy’s (Powerlifting legends) work! – Have fun!

Getting The Proper Fit
It is important that all of the teeth, especially the rear molars, fit onto the mouthpiece, yet the strap be no wider or deeper than necessary so as as to allow tongue and moth freedom and to prevent gagging.

The mouthpiece has an extra layer of leather on each side to prevent it  from slipping out should your jaw pressure relax or give out. These two layers rest against the front teeth and it is a good idea to put the weight down when you feel great pressure here or you will never lisp again!

Hugh Cassidy had 360lb about six inches off the floor trying to pull it higher. The audience was shouting encouragement and he was pulling for all he was worth despite the great pressure on the front teeth.

He did not want to set it down and look like a quitter and yet his teeth were really beginning to move instead of the weight. So he eventually wised up and put the weight down. Sometimes an audience will make you overexert yourself and hence liable to injury.

A good fitting mouthpiece sustained with strong even jaw pressure, will eliminate any stain on the front teeth. Without a good mouthpiece you will eventually have teeth so spread apart you will be able to gnaw an ear of corn through a picket fence.

A well-fitting mouthpiece such as the one Mr. Cassidy had made was a steal at 30$. Once can readily fashion his own cheaply however with a little help from the local shoemaker, or send away for one.

Hugh Cassidy’s training partner Gary Beltoya put many hours in, whiting his mouthpiece to an exact fit. He worked from a plaster model of his teeth which his dentist made. Gary got a perfect fit, covering every tooth and getting the proper thickness of the outside layers even with the gumline.

His strap is so constructed that if one tooth goes, they have all got to go. Unless you are eccentric or trying for a world record, or both, the regular mouthpiece will do nicely.

If your mouthpiece fits properly, you will quickly find that teeth lifting is far more a test of neck strength than that of teeth or jaw.

Mr. Cassidy would suggest a good warming up of the neck’s soft tissues prior to a teeth lifting attempt, or else start very light.

You will be surprised to find that you are able to work up to over 100lb on your first workout.

Even Bill Trueax (training partner) was able to lift 145lb on his first workout, and he has no front teeth.

Teeth lifting can serve two goals, that of neck development and that of strength. With a little practice and some heavy lifting, you can start lifting people with straps as well as weights. Lifting a human body never fails to elicit surprise and wonder from an audience.

The audience cannot always assess a given poundage in iron plates, but are well aware of the size and heft of a human being.

Hugh Cassidy told the story that he stole the show from Sanat Claus at a Christmas part in the past. The kids completely flipped when he lifted Santa a few times. He was fatter than Santa but nobody seemed to notice. There are often comments of “Who’s your dentist?” and “He’s gonna break his teeth out!”, etc.

Keep them guessing if you will, but the secret of teeth lifting is in the neck. Long after your face and jaw and teeth become accustomed to the weight, the neck will still be the limiting factor as to how much you lift.

Others have approached these records. Both Alexander Zass, (Samson), a travelling Russian strongman of the twenties, and Eric Soeder, a Scandinavian circus strongman were quite proficient in this lift.

Pullum, the famous English chronciler credits Zass with an unofficial training lift of about 580lb. consisting of a girder “weighing about 300lb. with a 10 stone man seated on each end.”

Soeder claims a 550lb teeth pull, also unofficial. Both Zass and Sigmund Breitbart were able to drive loaded wagons where the only connection between horses and wagon was a “bit” held in the teeth of the driver.

More common some years ago were the circus “iron jaw” acts where the performer hung from a trapeze by his teeth or slid down an inclined tightwire. Somewhat less bizarre and easier too are the feats of pulling cars and trains, etc. with the teeth.

Willoughby mentions in his book “The Super Athletes”, the feat of Joe Tonti who in 1945 pulled with his teeth a five-ton truck while walking backwards in his hands!

Needless to say, the feat of pulling an ordinary car is considerably easier – provided you are on level ground. The hard part is in starting the car and overcoming inertia. Once the car get rolling, the feat becomes one of endurance. One parking lot length ought to give you a good workout. As for freight cars, Hugh Cassidy haven’t tried one, but he was told that the tracks and wheel bearing do 88 per cent of the work.
Training 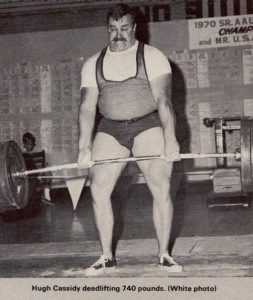 If one desires to really elevate some poundage in the teeth lift, it would be advisable to incorporate into your program a few assistance exercises.

Teeth lifting requires a strong lower back and good hamstrings. You will quickly realize this when you attempt reps and pull them as high as you can.

Stiff-legged deadlifts will take care of both of these areas, and high reps are preferable.

Also of value is some trapezius work. Both the spinal erectors and trapezius muscles terminate the base of the skull and are therefore much involved with teethlifting.

With the shirt off, it can be seen that the upper back and trap muscles flex quite a bit when teethlifting.

Shrugs and-or upright rowing will serve to condition this area and if done just prior to your teethlifting will help to get some needed blood and warmth to the affected area facilitating your first teethlifting set.

Direct neckwork, of course, gets the area better and should be done next.

Or, if you prefer, go right to your teethlifting starting with a low poundage for reps to avoid neck injury.

For Cassidy’s teethlifting, he used a stout chain about two feet long with an S hook on either end. He looped this through an 85lb block weight for his warm-up of twenty reps. The hooks, of course, hook the right on to the ring on the end of the teethstrap. You will have less jiggling and be able to set the weight down more fairly if you get a block weight or facsimile, or use a stopper of some sort on one end of your chain and load from the other.

Some fellows will wraps a chain several times around an Olympic bar and lift using the hands lightly on the weights for balance. In any case, don’t get a kink in your chain, as it invariably comes out during your lift and can give you quite a head snap.

Sets of 10 and 20 are great for developing the back of the neck as well as serving as warmups for the maximum triples, doubles or whatever.

Hugh Cassidy’s training routine for teethlifting an neck strengthening consists of the following.

The neckwork is done by means of a helmet with weights loaded on a pipe on top. Second and third numbers above in each group represent supersets in working both the front and back of the neck laying on a bench with head hung over. All of the above is done twice a week except for the rows which are done three times a week.

Technique
Your lighter teeth lifting sets can be raised much higher than the heavier sets and you should try to lift as high as you can. If not too heavy, you will be able to stand fully erect. Heavier poundages only come about 6″ off the floor as the back, leg, and neck strain is so terrific. The legs are used a lot in this lift and the neck tends to stay in a rigid isometric condition as the weight gets heavier.

For more neck involvement, throw the head up at the highest point of the lift. This again can only be done with the lighter sets. When lifting a maximum weight you may have to pull a few seconds longer, but once you get it started you are sometimes good for a triple.

Sometimes it seems as though your teeth, gums, eyeballs and even the whole face is going to tear right out, but keep pulling a mite longer and the weight will slowly rise.

Often with maximum attempts a psych condition is the only thing that will get it going. In any case, mind your warm-ups and get a good fitting mouthpiece and you will get some good lifts.

Error: Access Token is not valid or has expired. Feed will not update.