The Louie Simmons I know 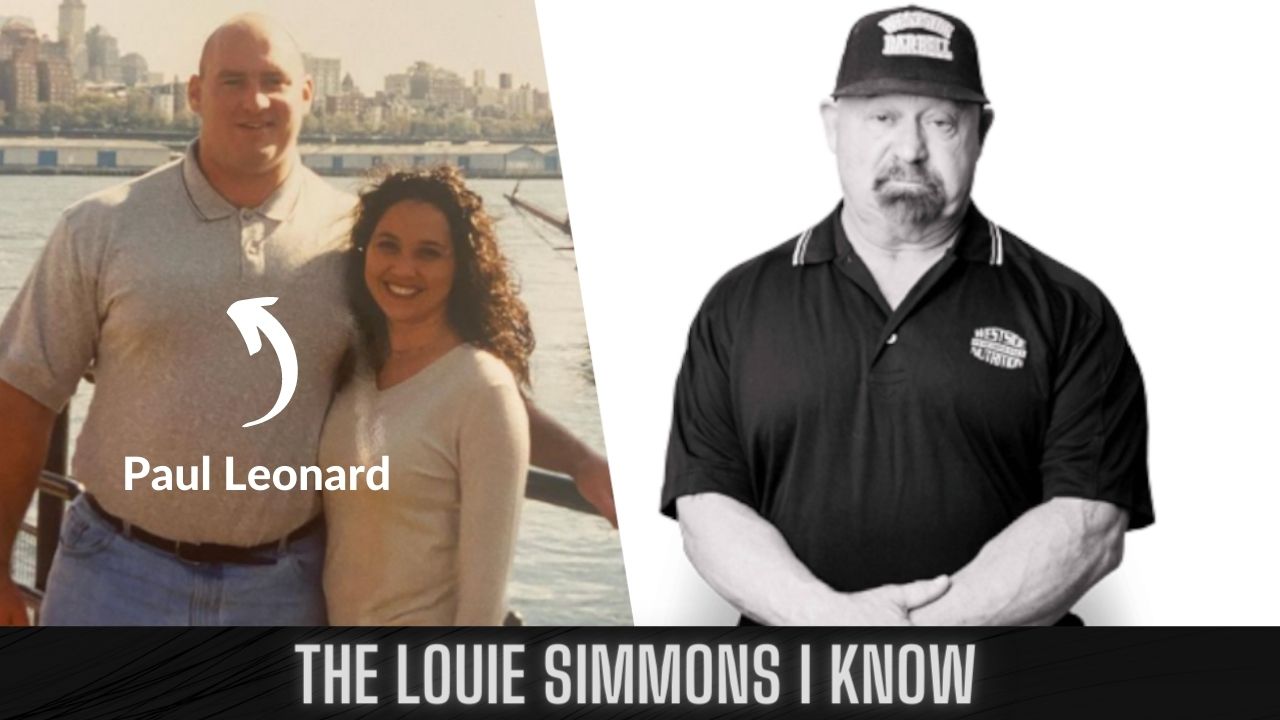 I first read about Louie Simmons in 1987 in Powerlifting USA Magazine. Louie wrote a series of articles in the late 1980s which I read but did not really understand. I did not apply any of the concepts that Louie discussed and I trained in the traditional progressive overload method that was popular at that time.

I did learn that Louie had been powerlifting since the early 1970s and was a pioneer of the sport. He ultimately totaled the elite total requirement for 5 different weight classes- something I believe only the immortal Fred Hatfield had done during his illustrious career. Louie was a National level competitor in the early 1970s and would go on to set open division top ten records in squat (920) bench (600) deadlift (715) and total into his 50s and 60s! But I am getting ahead of myself.
In approximately 1993, Louie began writing articles that were published again after a 3 year hiatus of his sharing knowledge with the only Powerlifting Magazine in the world at that time.

The articles also contained an advertisement for Louie’s video tape series with a tape for each lift entitled squat secrets,bench press secrets and deadlift secrets. I received these video tapes for Christmas 1993 and they were instrumental in me learning about the Westside Barbell method.

I had relocated to Southern California and at first I was disillusioned with the training atmosphere I found there. I lived in various parts of So Cal, but never found a gym or a training crew that inspired or interested me. I received Louie’s tapes in 1993 and I studied everything I could about him and his Westside Barbell System. Louie has said many times that when he started powerlifting he only had a power rack and an AM radio as his training partners. I was the same, except I had Louie’s tapes and articles.

With Louie’s information, I began applying everything he taught whoever was wise enough to listen. I had gotten to the stage where I could squat 600 bench 385 and deadlift 650, before I began Westside training. I had stagnated for a few years and knew, as Louie says, everything works, but nothing works forever. I trained Westside style on my own and hit my first 1700lb total in late 1994. Soon, I met a crew of powerlifters and relocated to be near the gym they trained at in Whittier, California.

I convinced really good local lifters to train with me and we followed the Westside system as best we could not actually training there. Everyone who trained with us at Yorba Barbell got stronger. I placed at that Men’s Senior Nationals and Louie Simmons became familiar with my name. I gave back to the sport by writing articles about my training partners Art LaBare and Josh Bryant. I competed at the meets that Westside went to, but I never met Louie.

The first time I met Louie was in 1999 at the IPA Seniors at York Pennsylvania. None of my training partners could travel with me from California to Pennsylvania so I had to find a crew to warm up with for my lifts and to get my gear on. I had sent Louie Simmons a copy of a Jon Coles 2370 total on VHS that year as a way to thank him for helping me total elite in 1998. I had been trading emails with Westsider Bob Youngs who was at the meet in York along with Matt Smith, Jimmie Ritchie, John Stafford, Todd Brock and Louie Simmons himself!

I introduced myself to Louie and he said he knew me from my articles in PLUSA as well as from the Cole tape I had mailed him. Louie invited me to warm up with Westside- which I was honored to do. Once Louie said I was in, I was in the Westside inner circle that day. I had a good day- not my best, but I placed 5th in the 308s and I did out total Matt Smith who would go on to win a WPO belt in a few years. Bob Youngs has since died of cancer and I never got to lift with any of those same Westside lifters, but Louie took me in when I needed help and he validated everything I had ever heard about his high character.

I continued to follow everything that Louie and Westside released as far as information, even when I competed in Strongman in 2001 and 2002. The next time I spoke to Louie Simmons was in 2007 when my training partner Mike Martin hurt his shoulder and needed some advice. I called Louie and left a message about the situation as well as Mike’s phone number. Later that day, Louie called Mike and talked with him for over an hour about how he should fix his shoulder. Mike has benched over 400 raw for over 30 years and attributes Louie’s advice and training system as the reason for his success and longevity.

I have not spoken to Louie in over 14 years now, but if I needed him he would be there for me. Today his website and podcasts are still loaded with information I learn from. Louie invited me to train at Westside more than once, but I have not done so yet.

Remember, Louie has said many times he regretted never going to the Original Westside in Culver City during the early 1970s- he only dreamt of going because work and life responsibilities kept him in Ohio. He built his dream gym and system there- I suggest you do the same. Louie often said he was envious of powerlifting legend Roger Estep who left Ohio with a 1600lb total at 198 and became the world record holder in the total by training with original Westside legend George Frenn. Imagine how lucky I was to move to California and befriend Roger before he passed away.

Louie Simmons is everything that is right about powerlifting. He has dedicated his life to the sport. He has given so much of himself to anyone interested in furthering the sport or their own lifts. He undeniably built the premiere powerlifting club in the World for almost two decades. Personally, Louie gave my life direction when I was a young, impressionable lifter with no answers to my training problems and plateaus. After I followed Louie’s advice, my strength dreams came true. The only thing I wonder about when it comes to Louie Simmons is, who will replace him as the premiere strength coach in powerlifting once he is no longer here?

(  a necessary read: My First Year Of Westside Barbell Training )