The Next Eddie Hall: Luke Richardson?

A few weeks ago Luke setted a new total world record with 21 years. He squatted 403kg/888lb, benched 222.5kg/490lb and deadlifted 385kg/848lb. Was this guy always big and strong? He’s been uploading pictures on Instagram for years. And there are some pictures from his teenage hood. 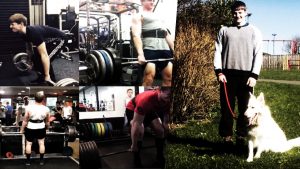 Above that is Luke Richardson deadlifting with 140kg/308lb and doing cardio with his dog in 2014/15. And yes, this skinny and shy youngster is supposed to be one of the strongest teenagers one day?!
Here is the story of Luke Richardson. He was born in great England. The United Kingdom is the stronghold of strongman culture and produced a lot of strong men like Geoff Capes, Eddie Hall and Luke Richardson! 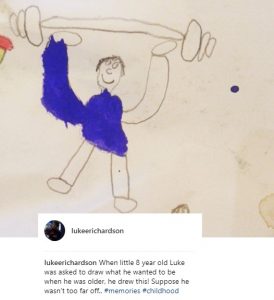 Luke started climbing and playing football. Thus his athletic background mostly came from. He said that he has always been the strongest when he was growing up. He started lifting weight. We all started lifting light weights and it was just a hobby. Also Luke started with light weights.
As I said his first deadlift was around 140kg. But one day he encountered a lot of powerlifters on youtube. Probably he watched tons of work out video from Pete Rubish, George Leeman and others. While watching these intense workout videos, you can breathe and feel their raw demons and these raw demons affected other youngster like me, you and Luke Richardson and the toxic seed was planted. To across the line you need willpower and love. 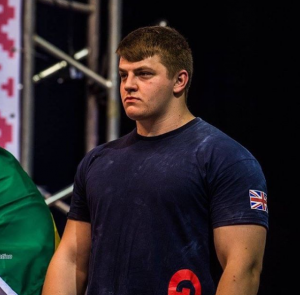 After winning his first competitions he has confidence and willpower to load up big weights. On Instagram he wrote, “A year of heartache, regret, and darkness. I am ready to right the wrongs of last year and prove to myself that I can do anything. No one wants this as bad as me. I hope you are all ready because I am just getting started. “ 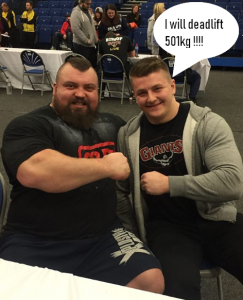 In the year 2015 he met Eddie Hall during the show “Giants Live”. Luke was there as a spectator and wrote this about Eddie Hall:
“Highlight of “Giants Live” was definitely getting to shake hands with “The Beast”. Could’ve said a million things but I’m an awkward bastard and just went all shy. Love him or hate him you can only appreciate and admire the effort and commitment that it takes to achieve what this man has achieved. If there is one thing that Eddie Hall proves most it is that no goal or ambition is too big and if you want something to go and fucking get it, regardless of what others say or think. Eddie Hall, you’re the man!”

Above you can see young Luke deadlifting 140kg in april, 2014! After 2 years (october, 2016) he was able to deadlift 330kg. How does this guy eat and train to become so far? On instagram you can see Luke is surrounded by strong people like Benedikt Magnússon, Hafthor, Andy Bolton and Eddie Hall. When you will be the best, you have to surround yourself with the best. Luke is very open minded about new training methods.

Deadlift Technique and his training routine
You will notice that Luke is used to deadlifting with touch and go, but sometimes he is doing dead stops. Here is the reason
“Whilst I’m doing high reps I do touch and go because it allows me to be pulled into a better and more consistent starting position. Trying to be deliberate with the touch and not just letting it slam and bounce. When I lower the reps I’ll start doing dead stop again mate!”

And you will also notice that he takes his breath at the top on the way down and hold whilst he starts lifting again from the bottom. Luke wrote this: “it is hard to breath in the bottom because I’m fat lolol. However I think it’s better for overall tightness and positioning for me to take the breaths at the top and not to reset every rep”

And how does he train? Texas Method, 5×5 or Starting Strength?
In his most successful year 2018 he was coached by Jim Elli. I really never heard of this guy. He is a “Online-Coach” and Luke gets 1-1 coaching so his training routine is sent weekly and “custom-made” for him. But if you would look at his instagram-posts and he seems to do 4s, then doubles, then triples for all lifts. Furthermore he is working with the RPE-Method. Assistance work he did: Good Mornings, Board Press and in the past he did Benchpress with Sling Shot. 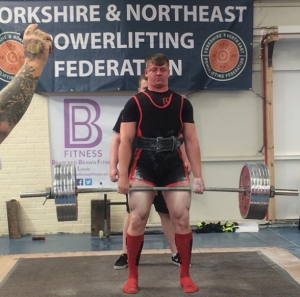 This competition taught me a lot of valuable lessons that I am still grateful for to this day. I can remember going into this competition genuinely thinking I AM THE fucking dogs bollocks, and that everyone is going to be so impressed when I break all the YNE records and win my class and best overall lifter. In reality, no one gives a fuck, and nowadays neither do I, but back then it was genuinely the most important thing in the world to me, and I got what I deserved when I was buried by my first squat which was a very humbling and valuable lesson in itself which is that the weight doesn’t give a fuck who you think you are. Now that’s not to say I discredit the effort that people put in at more foundation levels of the sport, quite the opposite in fact. At the end of the day everyone starts somewhere as I once did, and also powerlifting is not everyone’s life like it is mine. I think it’s far more important to work hard and be a good person than it is to break any record or win any title, but I’ll explain more later. Although I still did have a good competition and did everything I said I was going to do, it was a nice reminder that you are not a special snowflake and that the respect has to be earned. To those of you who are looking to compete in this sport for the first time use me as an example. Don’t wait until you’re ‘strong enough’ to enter a competition because you never will be. Don’t believe the hype. Don’t be a big fish in a little pond. Don’t determine your self worth by how much weight you can lift, but rather by effort. Surround yourself with likeminded people. But most importantly that you never know how far you can go. And although I am kind of contradicting myself here, if you have such a warped sense of self belief and confidence as I do, if harnessed positively it can be very powerful. So to cut a long story short, always aspire to be better for YOU. Have fun and enjoy the process with good people. Don’t believe the hype. And if you’re going to bullshit as I often do, make sure you back it up. Goodnight

2018 was his most successful year and it was not easy. There are a lot of strong competitors like Pavlo Nakonechnyy. That dude from Ukraine is also very big, young and strong. They have the same height 6 foot 3, but Luke is around 20kg lighter than him! They are monsters and it will be a head to head race like in the golden era of strongman. You remember Big Z and Mariusz Pudzianowski? They were also monsters and the fights between them were exciting and legendary. Thus they went down into history and will never be forgotten.

Luke said in one of his instagram posts that he is going to switch to strongman after his junior Career.

Will he be the next Eddie Hall? Will he even outdo Eddie Hall and Big Z? We can’t wait to see what he delivers!

1 thought on “The Next Eddie Hall: Luke Richardson?”