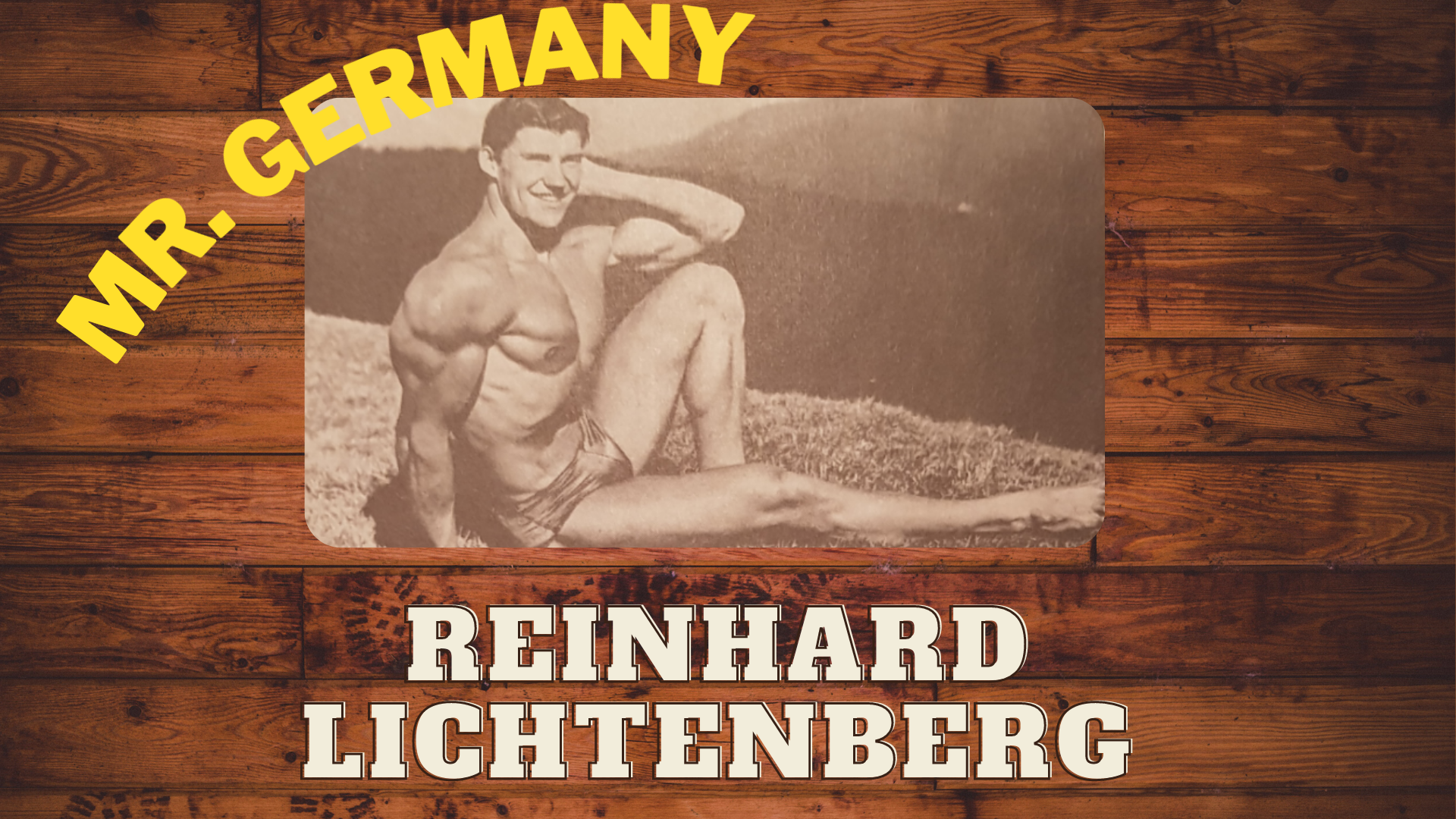 Should you be walking on a Sunday afternoon in the old Bavarian district town of Landsberg and encounter a strange familiar young man in Luftwaffe uniform – 1.90m tall, strikingly broad shoulders, fresh open boy’s face – you can be almost certain that it is the present Mr. Germany, our Reinhard Lichtenberg. So that’s how Mr. Germany became a strapping NATO defender; or better, was made one, because he didn’t go voluntarily. Military duty called, and now he sends himself into the inevitable.

This story is long overdue, and so we want to tell about him; about him, the 1962 German bodybuilding champion, who was the only athlete to also win the junior championship title.

Lichtenberg won these two highest national titles in the short period of only two years.

Nowhere in the world has it ever happened that one and the same athlete could achieve such successes in such a short time.

The 7th place among 25 people of world class at the Mr. Universe elections in London 1962 was another remarkable success of the only twenty-year-old.

The characteristic of his appearance is the fact that he looks far better than in his best pictures. When you face him, “in the flesh,” it “blows your mind,” as one young bodybuilder remarked on meeting his idol for the first time.

Lichtenberg is not only enormously massive (weight 98 kg), but the various muscle groups also appear wonderfully plastic and defined. Thus, despite his size and weight, he never appears clumsy or ponderous. His muscles seem to be chiseled, indeed they seem to literally burst through his smooth skin, which is lightly tanned even in winter.

An athletic figure through and through, an athlete out of a picture book! The way he presents himself – not at all like a so-called “star” – but simple, natural and friendly towards everyone, just as an athlete should always present himself – creates additional sympathy and friends for him. He is by no means out to produce himself at every opportunity, to put himself in the limelight; on the contrary, he is of a distinguished reserve and will rather diminish, understate his sporting achievements if anyone should speak of them in his presence. This is what he has in common with his idols STEVE REEVES and PAUL WAYNTER.

Needless to say, he is kind and friendly to all his fellow athletes, especially beginners, and it is never too much for him to willingly give advice on proper training and tips for better success.

He differs pleasantly from certain ‘athletes’ who arrogantly and stupidly refer to their alleged 46 upper arm, for example, but who never participate in an honest competition because they are simply afraid.

But let’s try to fathom what is remarkably ‘about’ Lichtenberg. First of all, there’s his height. At 1.9 meters, he already naturally towers over most of his fellow human beings. Then there are his well-known, super-wide, muscular shoulders with a circumference of 152 centimeters.

If he only had his shoulders and nothing else, his decision would already cause a stir.

Arms he has, though, arms like – yes, like who, actually? I personally measured 47.5 cm (forty-seven and a half) after the training! Arms and arms are really not the same thing.

For example, there are people with 48 upper arms, which look shapeless and fat, like those of the American Paul Anderson. Not so with Reinhard. His upper arm muscles are hard as steel and chiseled as if created by a sculptor’s hand. The abdominal muscle group is well drawn, though not outstandingly so, which is generally a hallmark of big, heavy athletes.

Lichtenberg’s waist is ideal: 76 cm (at a height of 1.90 m) hard and without any fat. Now we come to body parts that many bodybuilders prefer to neglect: the legs, or as we say here in Munich, “the feet”.

So Reinhard Lichtenberg might have the best legs of all German athletes. That was not always the case. Just two years ago, his leg muscles were by no means overwhelming. Now they are! Proof of what proper leg training (especially squats) can achieve in a relatively short time- One should not use superlatives like “best”, “most beautiful”, “strongest” inappropriately. But I can’t help it. Reinhard also has the best back muscles in Germany.

It is precisely his “backside” that has earned him important points in competitions.

So how did Reinhard Lichtenberg become REINHARD LICHTENBERG? How did it all come about? I get embarrassed when I have to describe the beginning of the beginning. It is the same for many famous athletes. At the beginning there was always the reading of our magazine Sport und Kraft, which introduced and popularized bodybuilding in Germany six years ago. Reinhard bought the magazine at a newsstand in Munich and shortly thereafter began training with the Hercules Universal and the dumbbell set. He was 16 at the time and had just left high school with a middle school diploma.

He wanted to become an electrical engineer and was now an apprentice in a large Munich company. Soon there was the first studio in Munich: a room in an old cellar, damp, musty, without daylight or fresh air. At least Reinhard got in touch with like-minded people very quickly here. That was also the time when our publishing house moved from Berlin to Munich. Reinhard was one of the first people to visit us in the editorial office. It was also then that Harry Gelbfarb invited me to a studio competition in Schweinfurt and asked me to bring along some boys from Munich. Reinhard was there, and also Wolfgang RANDELSCHOFER, the junior Mr. German of that year.

At this first internal competition in 1959, Lichtenberg already made an excellent impression and it was clear to all of us that he would be a favorite when we awarded the first Mr. Germany titles in 1960. On October 15, the time had come. Rarely has an athlete been awarded the title so unanimously and with such a high points lead.

The first German Junior Mr. Germany was Reinhard Lichtenberg. Among the seniors it was Reinhard Smolana who had the honor. From the Mr. Germany days of 1960 also stems his acquaintance with PAUL WYNTER, whom he admires very much and to whose advice and hints he owes not a little.

When we opened our first Hercules Studio in April 1961, under the direction of Reinhard Smolana, he was one of the first to come for training. In the studio he was always the center of attention, the other students around him, everyone wanted to see him, admire him and learn from him.

We forgot to tell you that Lichtenberg, although a resident of Munich for many years, was born in the deepest part of Berlin, in Wedding. By the way, only a few streets away from Reinhard Smolana’s house, whom he never saw before and only got to know in Munich. So the first two title holders have not only the first name in common, but also the place of birth. We all know what happened next. Last year, he experienced the greatest triumph of his athletic career to date. After a fierce competition with the representatives of the top group, he became Mr. Germany 1962, at the age of 20. He is the youngest of all previous title holders. 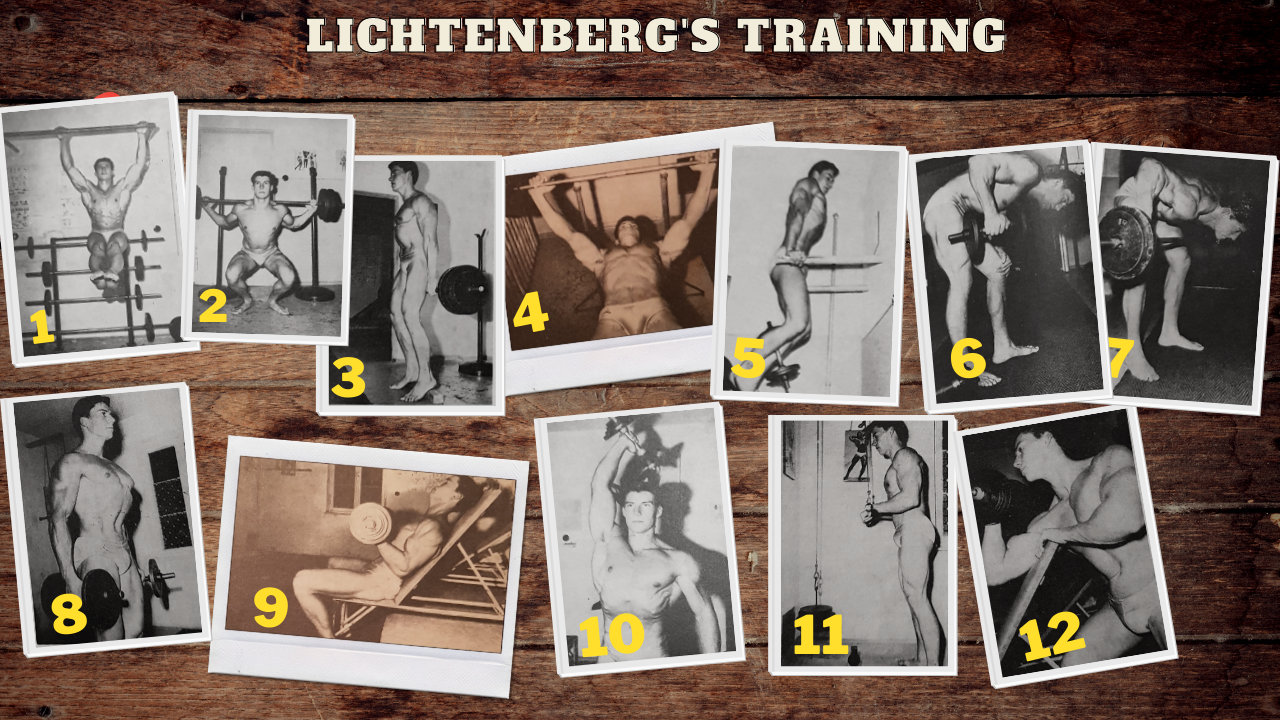