The Transformation of Lee Roy Saba 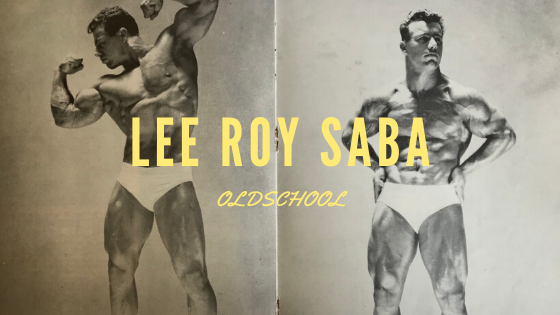 The following article was written by Leo Stern (around 1960) – Mr. Berg

“About two years ago a young sailor walked into the gym, stated that he had been working out regularly in his home town of Oakland, California and that a friend, Gilbert Martin, in whose gym he had been training, recommended that he do his training with us while he was stationed in San Diego.

At the time I did not pay any particular attention to him because this same thing takes place frequently. After he introduced himself and filled out the membership application, I told him where he could dress for his workout. Later he disappeared in the group working out in the gym but this mighty little fellow soon was not lost among the group, for after a general warming up I noticed him piling weights on the squat bar.

Though he weighed a little over 167 he was squatting with over 400lb. Even in a sweat suit he showed a lot of size. Naturally I was impressed and asked him what was his best squat.

He said, “450 at a bodyweight of 165″. This is of course an excellent weight to handle but in observing his form I noticed that he was just a little off balance and therefore not getting the maximum out of his strength.

I asked to see his leg development; he complied with my wished and to say he has huge legs is putting it mildly. At a glance it was evident that he was capable of doing repetitions with 450lb.

Since there was an Odd Lifts contest coming up in Chula Vista (now the home town of Earl Clark) I asked if he would like to train for it and in the process build his squat up to around 500. This of course appealed to him since at this time he was very interested in power and not particularly physique-conscious.

He was eager to change his style of squatting anything to make the magic 500lb mark. To make a long story short, he was soon doing sets of five reps with 450 in his training and he soon worked up to the point where one workout he did 4 sets of 5 reps with 450 and on another occasion did four reps with 475.

After a few months Lee Roy expressed his desire to take part in the Mr. Iron Man contest in Berkeley, so we started him on a rigid bodybuilding routine plus the strength lifts which are used in determining the Iron man of the contest, both in strength and physique. He won this contest and later when he reached his goal of a 500lb squat his interest changed to physique contests.

He decided to train hard and enter the Mr. Pacific Coast contest which was to be held in Portland, Oregon. This contest he also won plus the most muscular man title.

Shortly after he got back he was transferred and I did not hear from him again until shortly before the Jr. Mr. America contest. I received a long distance phone call one evening. It was Lee Roay with q question about his leg workout and since his bodyweight in March was up to 186 and was now down to 176 he wanted some advice. Since he is short, this bodyweight was far too heavy, and he had to cut down at least another ten pounds.

The phone call ended my contact and I did not hear from him again until he called and asked if I would write his Commanding Officer in regards to getting leave to take part in the Mr. America contest being held in Cleveland.

Fortunately the U.S. Nary is very cooperative and the Commanding Officers endeavor to aid their men as such as possible in training for and competing in all form of athletics.

Since Lee Roy was in Seattle he wanted to fly down to San Diego for his final training and also to take pictures for the magazines, which is something that we had planned for some months.

He arrived about 11:30 Friday evening one week before the contest. I assumed that he would want to go to bed and rest since he had just traveled about 1200 miles that day by plane and bus, but no, he wanted to work out, so I have him the key to the gym and as for myself I went to bed and got a good night’s rest.

Next morning I learned that Lee Roy had worked out until 3:00 in the morning. I am sure you will all agree this takes a lot of ambition and drive.

Before Lee Roy left for Cleveland, I got all the information on his beginning in the field of weight training and also a little of his personal background.

Lee Roy Saba was born January 30, 1938, and led a normal childhood except for being very ambitious, for at an early age (8), he started delivering the shopping news  kept on with the newspaper route until he was sixteen.

During this time he took up musical training and started playing the drums, (he never did say just how popular this made him with the neighbors), but it was this interest in music that made it possible for him to do this type of work in the Navy, which he joined in 1956.

Shortly after his enlistment he was sent to a musical school in Washington, D.C. and has been assigned to the band wherever he has been stationed. Perhaps it was his winning of several contests utilizing all types of drums that enabled him to be assigned to the musical division of the service.

One can readily see that Lee Roy comes by intensive and regular training naturally, for when studying over his interest and participation I can see he has always been active and eager to compete.

For instance, he started playing all sports with the local school teams at the age of nine; his sports interests were baseball, football, basketball and track and the short of stature he took part in the high jump, broad jump, and did pretty well in both the 50 and 100 yard dash.

He was not too successful with tumbling, because, before he gave it up, he managed to break his collarbone twice. He later tried his hand at boxing and took an active part as the age of 11 to 13.

About all he got for his effort that I can see is a broken nose that has recently been straightened, and I doubt that he will ever pursue this sport again.

Like all youngsters he joined the boy scouts and worked up to a star scout. Perhaps this was one of the things that prompted him to join the National Guard, for when he was sixteen he became and reached the rank of corporal in the surveying section of his outfit.

Now this might seem strange to the military minded persons reading this article for it does not seem right that while in high school, due to a back injury caused by heavy squatting, he had to drop all sports activity and therefore he joined the R.O.T.C. He became an expert rifleman and during his three years of R.O.T.C at Castlemont High he rose to the rank of Lt. Col. and battalion commander of his outfit. Here is a Lt. Col. in one outfit and a corporal in another; true he just received pay for one and that was corporal.

Prior to his entry into high school he took up weight training and his first interest was the three Olympic lifts; he had the good fortune to work under the guidance of that very power and popular heavyweight, Art Jones. He did very well, for in the first month he won the lightweight class in the Jr. Olympics.

Two months after he began regular training he joined Martin’s Health Studio and worked under the direction of Gilbert Martin. During his three and a half years of training there he tried to learn all he could about exercising and the fundamentals of the business operation for he hopes to some day operate a health studio.

Now for the final facts about his eating habits and record. Lee Roy is of Syrian and Belgian descent, and since his mother is an excellent cook he eats well balanced meals. When he is not training for a contest he eats in quantity but two or three months before a contest a lot of thought is given to the intake so that he can attain the maximum of muscularity and still have plenty of energy for his workouts.

To show his strength these lifting records speak for themselves; at a bodyweight of 163 he made the following: