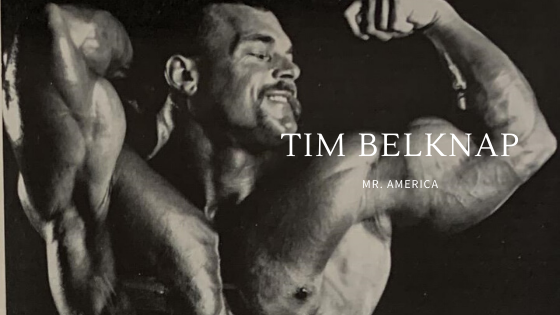 Tim Belknap sat on the edge of his living room couch, enthusiastically describing hat extra “something” that makes a champion. “You can tell just from their attitude toward their workout and diet,” he explained.

“So many of these guys say they want to win titles, but they won’t put out that extra effort…do that extra rep.”

Tim is a different man than he was in the past. He smiles easier now. That volatile personality that many learned to fear, is now under control. It comes out now as an explosion channeled into each set of exercise. Tim’s fiancé, Tina Hilts’ support and understanding, helped contribute to his mellowing.

“You agree that nutrition is around 80 percent of bodybuilding,” he continued, “one of my training partners eats submarine sandwiches and pizza all the time. I asked him, ‘Do you want to be a champion or just another big guy at Gold’s Gym? You have to train and eat like a champion’.”

Tim Belknap knows this well. It won him the Mr. World title in Belgrad, Yugoslavia, defeating the incredible Jeff King.

Tim and Tina had just returned from a highly successful tour of Europe and Australia. Fans were amazed at the muscle density of this phenomenal bodybuilder. Now, home and relaxed, Tim’s thoughts are on his wedding plans for August and September’s assault on the Mr. Universe title.

The story of Tim’s Mr. World win, started in the summer of 84′. At that time, he and his training partner, Paul Fedders, visited the gym in Northern California where Don Ross worked.

Tim weighed 230lb at 5’4″. He was cut at that weight! When he struck some poses, Don Ross knew he was looking at the most densely muscles man he had seen in the game. Gym members were awe-struck as the mighty Belknap blasted out the first rep of a 700 pound full squat! The bar bent under the enormous weight as Tim went down for a second, a third and finally a fourth rep!

Tim’s thighs were pumped to amazing proportion. Sideways, his massive quads and hamstrings looked as thick as they were long. His huge calves balanced the picture.

The next day, Tim treated the gym to a bench pressing workout. He worked up to 500 pounds! Tim’s monstrous arms and delts attested to his strength. Though he had been criticized for needing chest size, anyone could see that his pecs were monstrous. Tim didn’t know how to pose it in the past.

In 1986,though, crowds would gasp in astonishment when Tim hit his chest shot!

Belknap’s plan at that time, was to enter the pose-down for the Mr. Universe Team. He’d first have to be reinstated as an amateur. IFBB officials told him to compete as alight heavyweight.

Tim wasn’t holding more than ten or fifteen pounds of bodyfat. To diet down to 195lb., would mean loss of muscle tissue, ketosis and endangered health.

Being diabetic, Tim has to be more health conscious than the average bodybuilder. Despite this, he wanted a Universe title and being a true champion, would stop at nothing to get it.

Later that year, Tim’s bid for reinstatement was denied. Instead of hitting the pro circuit, he made the decision to compete for the NABBA Mr. Universe title in London, England. They would accept his amateur status. Most important, the contest is subdivided into height classes, rather than weight classes. Tim could enter as massive and impressive as possible.

Massive and impressive he was, as he defeated the muscular Larry Bernstein to win the Short Class. European officials were so impressed, they invited him to guest pose over the continent and compete for the Mr. World two months away in Belgrad, Yugoslvia.

This presented a new challenge, but he would have new obstacles. First, Tim had reached his peak. HE was cut at 218lb in London and somewhat burned out on diet and hard training, If he continued dieting, he’d lose muscle size and flatten out. Finally, how could he maintain encouragement and dedication? After the Universe. everything seemed to anti-climactic.

Tim found encouragement. Some of it came from bodybuilders at Gold’s Mr. America, Rufus Howard and master bodybuilder-trainer Kent Keuhn, gave him psychological support and advice. These two men are appreciated by many for their encouragement and positive attitudes.

Once, when Tim was on the verge of quitting, Rufus Howard told him, “You’re giving up. Don’t! You’re the best built man I’ve ever seen.”

Tim’s lifechanged on the advice of a friend, who doesn’t even bodybuild. Don Georgeson, from Madison, Wisconsin, corresponded with Tim and gave him fatherly advice.

“Put your faith in God,” was the advice. Tim took this to heart and would confide with his creator often. His confidence increased as did his love for his fellow human beings.

Woman bodybuilder, Pillow, told that she attended church services with Tim, Tina and Tim’s mother. She said it was a very fulfillinf experience. Maybe this aspect of life, often overlooked by bodybuilder, can spell the difference in the quality of our lives!

Paul Fedders pushed Tim through his workouts. “I used to be anti-partner,” explained Tim, “but training with Paul made all the difference in the world. He was in tune with me in each workout. As short-tempered as I get while contest training, we never had a major argument or falling out. We pushed each other to maximum effort.”

Paul’s physique shows the results of this effort. He has won several local titles and the Mr. America title in 1981!

Ali Mala and Kent Keuhn helped Tim with his posing. They worked on artistic transitions and proper positioning to accentuate Tim’s incredible mass.

Balknap solved the problem of diet burnout by fluctuating his calories. He would eat between 1800-200 calories for several days, then move up to as many as 3000 calories. This kept him from losing size or flattening out.

Tim had to make sure his blood sugar remained at the right level. He would eat fruit and three baked potatoes a day. One hour after the workout, he would have a baked potato and a cup of coffee. Tim would space his meals for a constant energy flow.

Like most very massive bodybuilders, Tim does few sets, but more effort on each. He trains very heavy with low reps until the final phase of contest training. At this time, he uses lighter weights and higher reps. Every rep is done with extreme concentration, activating every muscle fiber. Exercises are chosen to hit each muscle at several angles.

Between sets, Tim flexes and poses the muscles. This isotension brings out deep definition. To an untrained observer, Tim appears to be “checking himself out” after each exercise. This is not vanity, but muscle building activity. Mr. Olympia, Samir Bannout, also applies this method.

“The mirror is as important a tool as weights to a bodybuilder,” says Tim, “it is your guide.”

This is the routine Tim Belknap used the final six weeks to win the Mr. World title:

(Tim gets a good shoulder pump from chest work, so he does less shoulder work than most bodybuilders.)