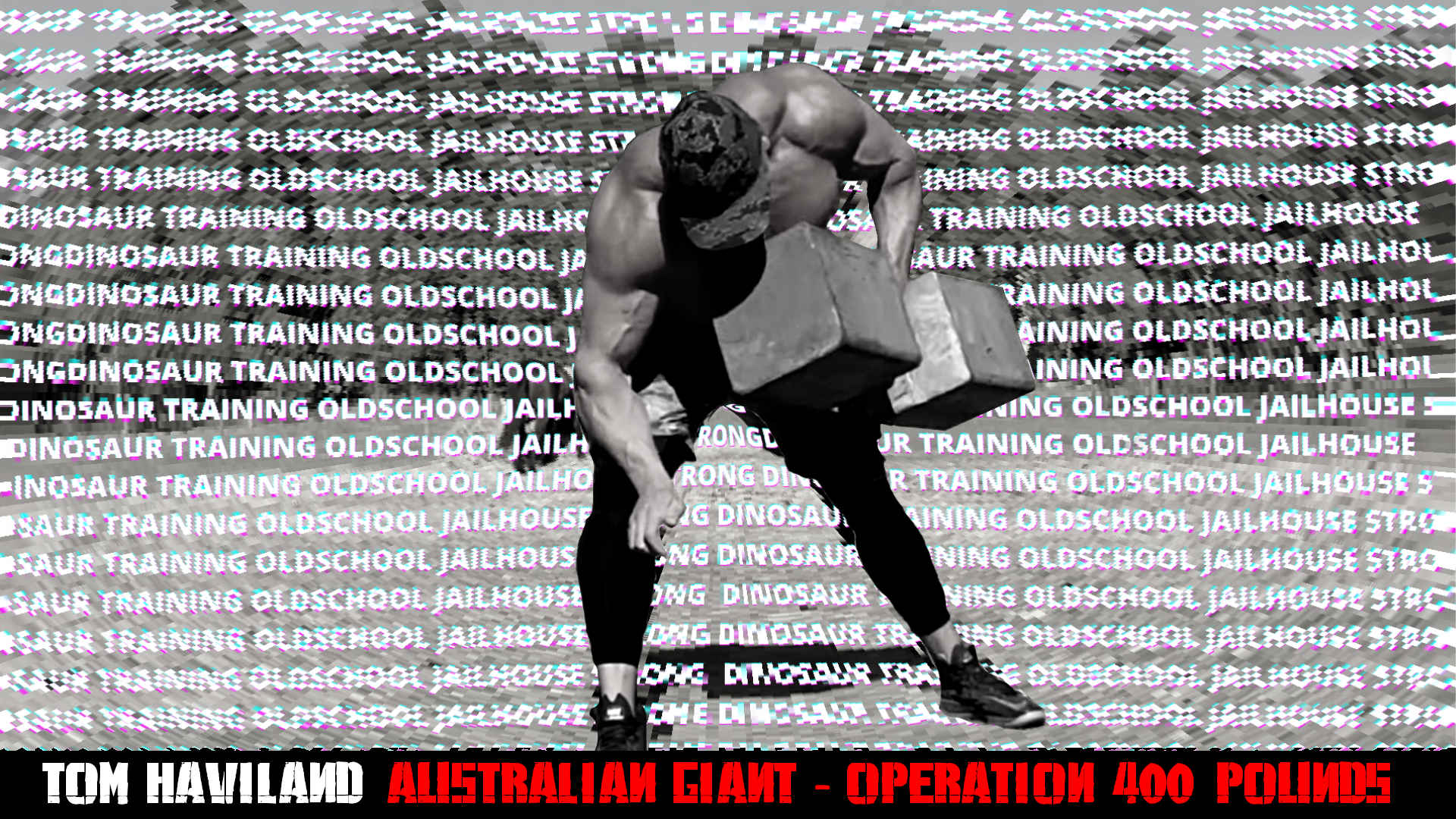 In August 2014, Josh Bryant posted a 30 second YouTube clip of Tom Haviland deadlifting 710lbs. On February 25, 2015, Josh Bryant introduced the online strength community to his trainee in Australia, Tom Haviland. The short clip on Jailhouse Strong’s YouTube channel showed Tom deadlifting 760 lbs and benching 520 pounds. Over the next few years, Josh has featured Tom on Jailhouse’s YouTube and Instagram while Tom has used Instagram himself to update the world and his fans on his progress and goals, specifically the goal of becoming the world’s largest, muscular tactical athlete and strongman. Fast forward a little over 6 years and Tom has benched 562 and deadlifted 881 in the gym and posted on YouTube.

In 2016, Tom was interviewed by Josh Bryant when he was in Texas for the Pig Iron Classic. Tom described how at that time he was living in Brisbane, Australia. Tom had come to the U.S, to complete against the high level of competition that the Pig Iron Classic presented. Tom referenced that he had known Josh for a few years and that he enjoys traveling to the U.S. As of this video published in May 2016, Tom had a 556 bench and a 771 deadlift, but he said there was a disparity between his training and competition efforts. Tom states that his goals then were his first 800 lb deadlift and 600lb bench. Tom said he weighed 330lbs at that time. Tom and Josh discuss his goal of pushing his weight up to 400lbs as that would help his bench press to increase the most. Tom said bodyweight gains do not influence his squat or deadlift as much as they increase his bench.

Tom tells Josh that if you miss a meal, just make it up at the next meal by eating twice as much. Tom is all business in the May 2016 YouTube clip called interview at the Pig Iron Classic Part 2 when he describes how he could not go to bed because he had his daily food intake spread out on the floor in front of him, this made Josh laugh out loud. Josh asked Tom what a normal day of eating would be and Tom said breakfast is 14 eggs, with a lot of toast, bread, oats are a big food for him, his later meals focus on red meat such as ground beef and steak as he notices a difference when he eats that over chicken. Tom prefers pasta over rice as he can eat more pasta, and added that he also eats eggs multiple times per day.

Josh added that when they added it all up they deduced Tom was fueling himself with 7700 calories per day. Tom added that figure may not include the milk he ingests. Tom states the cold hard truth that when people say they can’t gain weight they are not eating enough.

Three months later, August of 2016, Tom makes his next appearance on Josh’s YouTube with a two minute clip called 6’8” Tom Haviland bench training. Tom does repetitions with over 400 lbs in the flat bench, repetitions into the tens in the dip with 115lbs of plates attached wearing the slingshot and then standing dumbell hammer curls simultaneously with a pause at the top of the contraction. Tom’s form is text book, full range of motion on ever repetition, with a controlled eccentric and powerfully smooth concentric contraction each time. Looking back at this footage it is obvious to me why Tom has built over 50 lbs of muscle and has increased his strength so greatly. If you follow a certain lifter or athlete who is currently elite, try to find information and footage as to how that person got to where they are, not what they currently do.

A second video, posted a week or so later shows Tom pause benching without a shirt. Tom is a huge anatomy chart and the way the video is shot it shows the importance of the latissimus muscles during the correct performance of a bench press.

On January 10, 2017, Josh debuted a feature on Jailhouse Strong’s YouTube Channel entitled Operation 400, describing how there was also a hashtag campaign on Instagram of the same name, which was going to detail Tom’s goal of gaining muscular bodyweight from his then 320 lbs to 400 lbs. The goal is for Tom to get to 400lbs, with only 10% body fat as measured by a Dexa scan, in one year.

Josh stated that Tom has been in the Australian Special Forces and done some private security work, and he had saved enough money so that he did not have to work for a year in order to focus on his goal, one that no one had ever achieved before!

Josh described Tom’s very individual training program as 9 training sessions per week, focusing on hypertrophy. Josh details that Tom trains two sessions on Monday with 10 sets of 6 on the bench press supersetted with seal rows for 10 sets of 10, he then rests for 10 minutes and does a heavy set of dips for 8 reps. After resting during the day, Tom comes back in the evening and does hammer strength incline presses, going to failure on five sets with a 15 second break between sets then he does flyes next for 3 sets 15, 12, 10 rep scheme, then on to incline cable flyes for 5 sets of 12, 10, 8, 6 reps, then he finishes with the Juarez Valley 20 push ups.

In a YouTube video released on January 19, 2017, entitled Operation 400 week 2, Josh does a voice over while Tom is training shoulders supersetted with upper back. The workout demonstrated is ten sets of 6 reps of over head press with a barbell then he did neutral grip pull ups with his body weight for 9 reps in between sets of military presses. Two and one half minutes was the rest period between supersets. For leg work, Tom is shown doing 2 sets of 5 repetition squats with the safety squat bar done Hafield style. He followed this up with ten sets of ten repetitions on the leg press using paused repetitions and impeccable form. Four sets of 35 meter backward sled drags were next to work his legs exhaustively. The sled was loaded with 556lbs and he took 90 seconds between each set. After a rest at home, Tom would return to the gym in the evening where he did 5 sets of 5 leg curls with 190 lbs followed by split stance Romanian deadlifts for 3 sets of 5 reps with 205lbs. Glute ham raises ere next for reps of 7,6, 5 with a two minute break then this workout culminated in doing some land mines.

Josh posted nearly weekly updates and by October 1, 2017, the YouTube update on Tom proclaimed that he was now at 370lbs, up 45 lbs since the beginning of that year and still Tom was lean, muscular and athletic. Tom had a tricep injury and then had to travel for 5 weeks, unable to train and diet to the fullest of his normal capacity. By now his training split had changed somewhat and Josh described his first workout of the week as a strength based day with the focus on squats, deadlifts, low rows, farmers walks and RDLs. Day 2 is a bodybuilding workout emphasizing shoulders, lats,biceps and forearms. Tom is off on Day 3. The 3rd day of training is squatting in the morning and then a bodybuilding leg workout in the PM. Day 4 of the routine is dumbbell based benching and floor pressing. Tricep work follows. The next workout day is a bodybuilding upper back session. At the end of this video Josh proudly proclaimed that Tom was now up to 370lbs.

This training program is backed up by caloric intake of 8500 to 10000 calories that is high protein, high carbohydrate and moderate fat intake.

After October 2017, Josh did not post any of Tom’s workouts or related information until July 2018 when he then released a YouTube video entitled Operation 400 revived.

Stay tuned for a second article regarding how Tom came back from a tricep injury to re-launch a second attempt at reaching 400 muscular pounds.