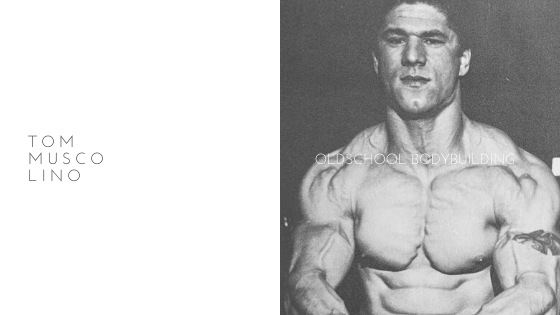 “Tom Muscolino burst upon the Chicago physique scene in late 1968 and began winning or placing high in every important contest in the area. His list of titles is impressive as they include:

Just four short years ago Tom Muscolino was an average high school youngster who was interested in most sports but was handicapped by his size. At 5 feet 9 inches in height Tom weighed only 125lb. How did Tom move from these dimensions to his present weight of 205lb at a height of 5 feet 11 inches and national prominence? Secret exercises, constant workouts, special foods?? No, one of these things were responsible for Tom’s development. He uses the standard exercises in his workouts with a few variations. He leads a rather normal life, working full time as a lab assistant for the Chicago Sanitary district where he has been employed since his graduation from Kelly High School. As far as diet is concerned Tom says that he eats “anything and everything” except just before a contest when he cuts down a bit. His only supplements are soy flour, wheat germ oil, vitamin B-12 and liver tablets. He finds eight hours of sleep per night sufficient. In short Tom leads just about the kind of life which one would expect from any young man twenty years of age. What is the reason for his rapid improvement then? If there is a secret to Tom’s success it is simply dedication and hard work.

Tom finishes work each day at 5 o’clock, goes home for dinner and then reports to the ultra modern, ultra clean Hercules Health Club on Chicago’s West Archer Avenue. By the way anyone in the Chicago area looking for a great place to do bodybuilding per week Tom works like a demon. Monday, Wednesday, and Friday he works his chest, shoulders, and biceps. On Tuesday, Thursday and Saturday he works his back, thighs and triceps. Tom’s calves are a bit under par for his thighs and so between work on the other body parts he merely does nine sets of calf exercises. This makes for a total of 162 sets of calf work per week. This is what I mean by hard work and dedication. Many a lesser man would be content to do ten or fifteen sets of calf work per week and then whine that his calves just don’t grow. How does Tom keep his waist trim? He simply begins each workout with 400 sit-ups on an incline bench.

You may note some of the attitudes and philosophy of fellow-Chicagoan, Bob Gajda in Tom’s workouts. Like many others Tom began bodybuilding in his basement but eventually gravitated on the Duncan YMCA where he trained with Gajda and Sergio Oliva for 3 1/2 years. One of Tom’s favorite exercises is the seated dumbbell triceps extension which he refers to simply as  “the Gajda”. Also in the Gajda tradition Tom doesn’t believe in measurements and has no idea what his various dimensions are. 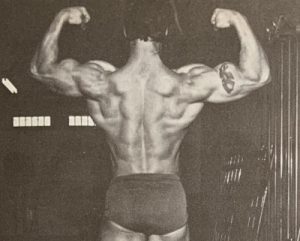 The remainder of Tom’s exercises are rather standard using three or four exercises per body part, usually five sets per exercise and 8-10 reps with maximum weight. When I say maximum I mean just that. Tom claims a 400lb bench press at 200lb bodyweight and puts similar effort into every exercise. While the pictures for this article were being taken Tom refused to pose with lighter weights. He simply doesn’t know the meaning of the words. “Take it easy”

Tom’s typical workouts are as follows:

Added to this routine are occasional runs, football, basketball, softball, when time allows. The remainder of Tom’s time is taken with a concern for race cars and of course, girls.”