There were 4 Type of system/programs, which Doug Young used to improve his benchpress.

(1) The legendary 8 Months routine. Doug Young made rapid progress with this system. He was able to add 235lb/106kg to the bench over a eight-month period. But this kind of system was a short run and he would not recommend it anymore.

Doug used to experiment and refined new training routines. According to him the following 3 Systems are ideal for peaking or bulking strength.

(2) Off-Season (builds Muscle and Power, without burning out, for bulk and strength he used the third system) 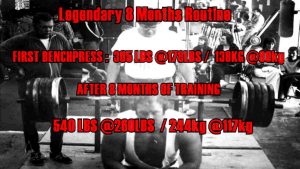 Throughout this eight month period, Doug concentrated almost entirely on the bench press and the upper body. His workouts were constant during the entire time. They consisted of the following exercises with the weights listed being the heaviest he handled during that period:

Doug did this same workout three days a week (Monday, Wednesday, and Friday) throughout this eight-month period, varying it only be going for heavy doubles in the bench instead of singles if he happened to be sore. The only leg and back work he did was four or five singles in the squat every ten days, and six or seven singles in the deadlift every 15 days. This concentrated upper-body work brought his arm measurement to 19.75 inches and his chest to a full 60 inches. That day, at 245, he said his chest had dropped to 55 inches. If the 60-inch measurement was accurately taken, it is the largest on record for a man of his weight. 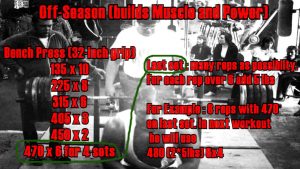 According to Doug this system builds Muscle and power without burning out your nerv system.

On the last set he does as many reps as he can, adding 5 pounds to his basic workout weight for each repetition over 6. For example, if he got 8 reps on his last set with 470, he’d use 480 for his 4 heavy sets in the following workout. 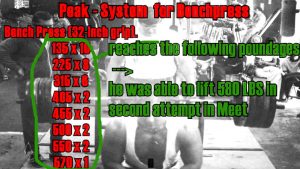 When he is specializing on the bench press, which is most of the time, he uses the following sets, repetitions, and weights, and he does this program EVERY OTHER DAY: Monday, REST, Wednesday, REST, Friday ,REST, Sunday, REST, Tuesday, REST,(…)

When Doug reaches the above poundages, he figures that he’s good for a 580 second attempt in competition. He feels that the above routine is excellent for reaching a maximum single in the bench press, but considers it a poor way to gain the sort of bulk and strength which is usually trained for in the off-season.

For maximum strength and bulk Doug recommends the following system, as he says it builds muscle and power without burning you out. He uses the program twice each week, with the following approximate poundages: 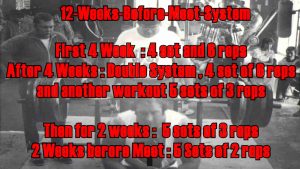 The above poundages are figured on the basis of a top weight in his alternate program of 4 heavy sets of 6 with 480 pounds. He attempts to keep his 5 sets of 3 about 50 pounds higher than his 4 sets of 6.

For his last five workouts before a big meet, he uses the 5 sets of 3 program for the first three sessions, and then cuts back on his reps so that in his final two workouts he does 5 heavy sets of 2 repetitions. These last two workouts would be done as follows:

On this last set he would try to get 3 reps, or even 4 if possible.

This last training session would be on Tuesday or Wednesday if the contest was to be held on Saturday. During the time Doug is using this six-week cycle, he will also be doing his very limited workouts in the squat and deadlift. When he is on the six-week pre-contest cycle he squatted and deadlifted only once each eight days, using a 5,4,3,2,1 program, with 25-pound jumps between sets.

The following workouts are the ones he said were the best he’d ever made in training. His bodyweight was about 255 at the time.

Edior’s note: Use the below tag-system and click the button “benchpress” or “Doug Young” for more informations and articles developed by champions! Mr. Berg

2 thoughts on “Train Like A Beast: Doug Young’s Training Routine”