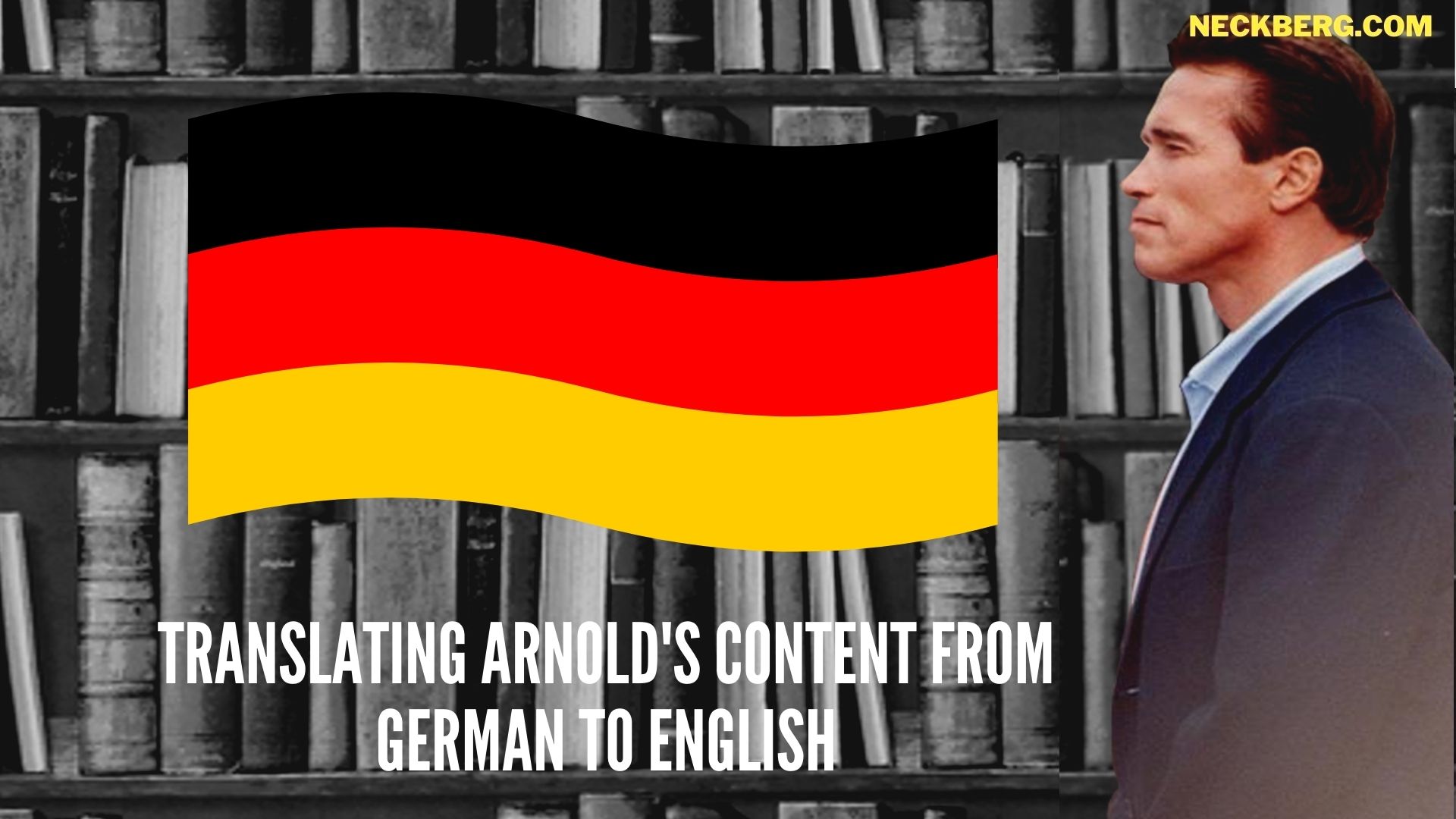 The YouTube video entitled “Arnold Schwarzenegger German Lesson” obtained just an incredible number of views. Arnold is counting in German: “One, two, three,” while Franco is benching. Then, Arnold said, “That’s enough for today.” Franco started laughing and couldn’t finish the bench press. Franco replied, “Du miststück” (“You son of a bitch”) and was able to finish the set.

As you might know, Franco could speak German too. He worked in Munich as a Taxi Driver and had to speak German! In my home country, Germany, there are a lot of old German Magazines, in which Arnold and Franco give insightful interviews in German!

Germany’s most famous TV-Show “Na Sowas”, invited the Austrian oak. The host “Thomas Gottschalk” studied Arnold’s history, and knows that he loves everything strength-related, so the show was filled with strength athletes.

Bavarian strongmen performed the most famous strength act called FINGERHAKELN (Finger Wrestling). All of them have a powerful and mighty appearance. One of them told the story that they are very often in pubs. When they run out of beer and they are bored, they would start finger-wrestling.

Thomas Gottschalk asked him about some tips, and one of them said, ”I am doing ‘dead hang’ from the ceiling, (just with the fingers) as long as I can.”

After that, three female Powerlifters showed up. They performed a deadlift with 140kg, a squat and a bench-press with 40kg.

Then Gabriele Sievers, a two-time world champion in bodybuilding, showed up and performed a great posing routine.

Finally, Arnold appeared and said, “That’s fantastic. It’s like being at a bodybuilding championship with strength acts, weightlifting and female bodybuilders!”

Schwarzenegger revealed that his heart is beating for Europa and especially for his birthhood Austria. He said he lived for two years in Munich and will not give up his Austrian citizenship.

So, six years later, he showed up again at that German show in Leipzig. Thomas Gottschalk didn’t forget that Arnold loves strength acts, so Germany’s Strongest Powerlifter Michael Brügger appeared. He was the first German to total 1,000kg raw! Mr. Brügger performed a strength challenge with a girl, and Arnold bet on who would win.

Arnold talked about the special Olympics and the movie Terminator 2. Thomas Gottschalk made the statement that Arnold does not kill anybody in the movies, so he is the “Good Guy”.

Schwarzenegger said that he achieved a lot in America and it’s important “to give something back,” and that “the strong man should help the weak man.” So, the special Olympics is a great chance and pleasure for him. He likes to train with disabled people and to motivate them.

It was published by Austrian TV Channel ORF. In the first seconds, Arnold is jogging on the street. Then, Schwarzenegger said that bodybuilding is a sport and the amount of weight isn’t important to achieve a great body.

Arnold said, “Muscle mass is not the most important thing to become Mr. Universe. All muscles should be balanced.”

At timestamp 01:50, he is exercising the latissimus with the Lat Pulldown Machine (behind the neck, wide grip) with 300 pounds for 20 repetitions. “I am doing this exercise daily,” he said.

The next exercise is the Nautilus pullover. Arnold said, “It’s a great exercise for Rib-Cage. It’s a torturous exercise.” He’s performing 200Kg for 10- 12 reps. Then he’s performing his favorite exercise T – Bar rowing with 150kg.

The documentary caught up on some topics about sex drive and intelligence. Arnold said that he has in every town, ten girlfriends and his sex life is great.

In the next scene, he’s driving a car, and seated next to him is his mother. While driving Schwarzenegger had a telephone call with a girl named “Janett.” He said that his mother would make the famous Austrian cake “APFELSTRUDEL”.

In the next scene, he’s jogging on the beach. A girl shows up (named Robin) and they kiss.

Arnold says that when he’s on competition prep and the veins are showing up, most of the girls feel disgusted because they think his body always looks like that.

Arnold said, “When I’m lying on the beach, relaxed and outside my competition preparation, then the girls consider the body as sexy! That’s what we all want to have—to be sexy. Haha.”

In the next scene, his mother was interviewed:

“As a small child, he pinned the pictures of Steve Reeves on his living room wall. I told him to learn something ‘real’ and to get a serious job at first. But he never gave up. Yes, I am proud. My son has always been very good to me. Arnold said to me, “Now I will treat you like a queen. Now life begins because you never had anything good.”

Schwarzenegger was interviewed by German Entertainer Biolek Alfred. He made the statement that Arnold lost some muscle size and looks skinny.

Arnold said, “I don’t train much anymore. I am training one and a half hours daily—that’s enough.”

He is talking about his new role as a police officer, and remembers that his father told him, as he was a little kid: “Arnold, you have to become a policeman, like me.”

The documentation starts with Arnold lying on his bed and reading a manuscript. The narrator says that Arnold is quite successful and often read manuscripts for new movies like “Max Schmeling”.

Then, he’s in the kitchen, drinking a glass of milk. Schwarzenegger likes classic portraits and is collecting artworks from Salvador Dali and Marc Chagall. At that time, he’s living in a big apartment with a worth of 250,000 dollars. The narrator said that Arnold earned 400,000 dollars through commercialising his bodybuilding pictures.

In the next scene, he is driving a Mercedes to his “bodybuilding company” and according to the narrator, Arnold has 52 coworkers. They are all working in storage and preparing Fitness Equipment for shipping (Magazines, Expander, Supps).

Arnold’s company building is quite huge, then Joe Weider showed up and they started talking about business. In the middle of that clip, Arnold is sitting in his apartment and philosophizing about bodybuilding.

Arnold: “For me, bodybuilding was a bridge to achieve just more. (…) People don’t understand why bodybuilders like to pose in front of a mirror. The mirror is a tool for a bodybuilder. It is like a stopwatch for a runner.”

Stay tuned for updates, I will steadily research for some more old content, in which Schwarzenegger is talking German, and present some translated pieces here on my blog.