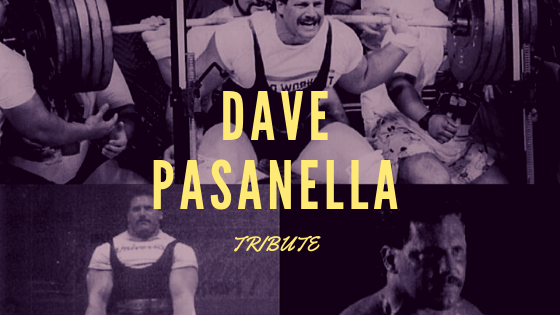 The following piece of lifting history was published in PL USA (back in the day it was one of the greatest lifting magazines!). Dave Pasanella died very young, and here’s is a great tribute to him.. Mr. Berg

“Another tragedy has struck the sport of Powerlifting – on June 12th, the 28 year old Director of Player Development at Georgia Tech, Dave Pasenella, was killed as he swerved to avoid another car and his vehicle impacted a utility pole. Dave, previously a very successful collegiate football player and one of the greatest Teenage National Powerlifting Championships our sport has ever produced, was already regarded by many as the Strongest Man in the World, but so much of his future seemed right before him. He and his associates had just begun marketing a new brand of food supplements (the ‘Pasenella Plan’), and a sportwear line was on the way.

He was to be one of the featured participants in a major, upcoming strength coach convention. He was sharing his knowledge with some excellent drug free powerlifting prospects, and he handled several of them in the N.A.S.A. Grand Nationals, held in Atlanta only 10 days before his passing.

Only 3 days before his death, he had met with Ernie Frantz in Illionois and assumed the Chairmanship of the World Powerlifting Congress (WPC). In his training for the upcoming APF Senior Nationals, he was hitting PRs in the bench (500×5 for 5 sets) and the deadlift (830 x 3 for 4 sets), while just taking it easy (960×2) in the squat.

Weighing 300, he was incredibly thick and massive overall with gigantic biceps, yet he still seemed athletically trim. Not looking forward to dropping the weight to the 275s, he talked to John Ware about meeting him in the Supers in Pittsburgh, so they could inspire each other to some incredible lifts. Who knows what he would have lifted at that meet, or in the span of another 5 years?

As one of his good friends, Dr. Tom McLaughlin, stated the day after he died – even the strongest man in the world can be gone in an instant – we are all just mortals.

The cover on this issue of PL USA had been pre-planned- We were going to publish, in this space, an excellent interview with Dave, conducted by Carl Lawson, a student athlete at Georgia Tech, and an active varsity football player. In light of the sudden developments, we decided we would rather use these pages as a tribute to Dave, based on the interview text Carl provided.

– On Starting Young: Dave began training at age 13, and advocates this practice for others on psychological and physiological reasons. He noted that “Bulgarian research has shown that high pubescent testosterone levels help stimulate great strength gains” in the teenage years.

“Psychologically, starting at an early age helps in developing a positive cognitive and emotional framework for competitive lifting” and the discipline for any sports activity.

“I was fortunate in beginning my training at Thorbecke’s Gym in Scottsdale, Arizona. At the time, there were many great powerlifters and strength athletes such as Jon Cole, and Superstar Billy Graham, as well as owner, Bob Calvin and Jim Fursaro were my early influences.

– Current Influences:
“I am very fortunate to work with one of today’s leading authorities on strength development, Pat “Jake” Jacobs. I have been working with Pat on an informal basis since 1981, and directly with Pat serving as my coach since 1987.

It is also important for me to have the day to day motivation and assistance of training and lifting partners such as Jim Schulze and Jim Lathrop, who not only assist in my day to day preparation, but also serve as handlers for me at contest.” 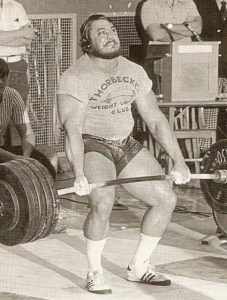 “Growing up in the same neighborhood, I had the opportunity to watch Jon Cole in training and in competition. I view him as a front runner, a man who set the pace for others to follow.

I admire any individual who has the desire to accomplish what no one else has achieved. Currently, I respected Ed Coan, who in his younger years did not let his age and experience hinder his performance and who now continues to push the boundaries of world record lifting. Another individual whom I greatly admire is Ernie Frantz, not only for his success and longevity, but also for his commitment to powerlifting and concerns for its lifters.

– Most Memorable:
Dave’s most memorable moment was at the 1988 World Record Breakers Meet. “It was the first time I was in a meet where lifters, judges and promoters all worked in unison.

Everyone was supportive of one another, and there was none of the seemingly requisite ego clashed. This may be due to the elite nature of that group of lifters. One example which I recall is Jeff Magruder standing on the side of the stage, expending his energy, exhorting me on to a successful lift, thinking nothing of his own upcoming attempt.”

“Although I had suffered some disappointment in ‘bombing out’ for the first time ever at the 1989 Record Breaker’s Meet in Hawaii, I was ready for something big. Due to my limited time schedule, because of my responsibilities at Georgia Tech, I had to jump on the horse quickly

Chicago afforded me the possibility of doing this. I wanted to use this meet as the site to put it all together in front of judges who would scrutinize my lifting closely and fairly. I was very pleased with my accomplishments at this meet. However, I was left with the feeling that I have much more in me and this hunger for more has driven my training throughout the past year.”

– Training Philosophy:
“When I was younger, I loaded the bar all of the time. I would be trying to establish a new maximum every week. As I grew older, I discovered that this was not effective in making continual, steady progress.

Therefore, with the help of Pat Javcobs, I adopted a more scientific approach to training. Utilizing principles of periodization, cycling intensity and volume, and employing some variety of exercises with my program, has enabled me to elevate my training standards, and, therefore, my competitive, standards, avoiding significant plateaus and remaining relatively injury free.

Although I still believe my success stems from my high intensity training of yesteryear, now I only utilize these workouts on prescribed training days.”

Diet & Supplementation
“I am ashamed to mention what my diet consisted of when I was younger. I are pretty much whatever I wanted. Again, experience and knowledge is a great teacher. I have found in my own personal experience, and in my studies, that a diet higher in protein (approximately 20%) and carbohydrates (approximately 60%) as well as vitamins and minerals are essential to the development of a highly trained athlete. It has become an essential in my life. Often, in today’s society, it is very difficult to get the proper nutrients in an average meal. Therefore, supplementation can be very important to your diet.”

– Powerlifting Goals: “I don’t like to get specific about number. I feel that setting numbers on your lifts tends to subconsciously place limitation on yourself and your eventual progress. I believe in shooting for the stars, and – only if you have to – settling for the moon. Goal setting is extremely important. It’s essential to set personal goals, which challenge and demand work on one’s part and which are relative to one’s skills and experience.

“I do not feel that powerlifting has been given the recognition it deserves. Powerlifting is truly the ultimate test of man’s raw strength. There are no other movements that legitimately and consistently test man’s strength. The reason powerlifting has not received wide scale recognition is the direct result of (1) The general public’s lack of interest in the traditional meet format which can be a long, tedious affair for spectators; (2) The public misconception that all strength athletes are big, dumb, chemically produced, intimidating behemoths; (3) The continuous feuding and ego clashed between lifters, promoters and administrators.

These problems find their way into the media and, therefore, the public perception that powerlifting is a disorganized, internally divided pseudo-sport. (4) Due to these internal divisions, the public has no clear cut definition of whom to follow or whom the champions are.

On a positive note, we live in a nation based on its plurality. In powerlifting, a variety of organizations, while somewhat unruly and confusing, provide for the lifter a great deal of power to determine the future of the sport, by not only allowing the lifter to pick the organization under whose rules he wants to lift, but also by forcing each organization to constantly consider their policies and make appropriate adjustments which will attract lifters and may eventually, if nurtured properly, lead to unification under an all encompassing organization that is satisfactory to all involved in the sport”

– The future of powerlifting
“I think the future of powerlifting is very strong, because as I said earlier, it stands as the ultimate sport for testing maximum strength. Concerning the problems which this sport faces, there are measures which can be taken which would be acceptable to all involved, and would go a long way toward solving them. First, in my opinion, we must set up a contest hierarchy in which definite, specific qualifications requirements are set up for all levels of national and state competition, similar to track and field.

Secondly, concerning the public misconception of powerlifters, we must try to always present a professional image when dealing with the media and in public.

Thirdly, it is time to subjugate our egos for the betterment of the sport and begin to deal with each other on a professional basis. There’s plenty of room at the top. It is time to unite and push forward into a successful new decade for powerlifting.”

-Going to Superheavyweight
“In recent meets, it has been more difficult for me to make weight. I regularly have my bodyfat calculated and over the past several years, my lean muscle mass has increased 4-6 pounds per year, and my bodyfat is currently 12 percent. If I continue at this pace, a move to the super heavies is probably inevitable.”

– The Final Question
Carl Lawson noted that Dave has been described as being “next, in a line of premier lifters” and wondered how Dave perceived his own place among the great powerlifters. Dave replied “It is a tremendous honor to be listed among this sport’s greats, and if the Lord allows it, it will be able to continue far into the future.”