“Many people who have just recently met me, asked if I had been strong before I started to train with weights, and how I managed to gain such gigantic proportions without destroying what I call the symmetrical appearance.

When I was 17 years old I weighed 170 pounds and practiced acrobatics everyday with my brother Bob. I started weightlifting in order to gain extra strength and endurance for the routines we rehearsed. A short time after I started lifting I found I had greater strength and could easily do an iron cross on the rings, a three finger handstand, a straight arm hand stand lever, a straight arm flag and reverse flag.

I was always interested in developing both strength and size, as I had heard stories about my Uncle John Reid who had been a circus strong man and entertained through Europe. Inspired by my Uncle’s feats of strength, I trained regularly and was able to perform a 210 pound one arm Clean and Bent Press before I turned 18 years of age.

Through acrobatics and odd lifting I developed my upper body, but my legs were lacking in both size and strength. Determined to improve my lower body, I started to train on the Olympic lift. Eventually, I made a 320 Press, 270 Snatch, and 365 Clean and Jerk. I have also done, unofficially, a 450 Bench Press, 210 Curl, and 550 full Squat.

Many enjoyable hours were spent lifting in my own back yard with my brother Bob, Sonny, Pete, and Bob Nathans, and Bill St. John.

We formed a weightlifting and bodybuilding club and alternated training at each others homes. This I found was extremely helpful in keeping up my interest in training as we competed among ourselves in various lifts and exercises. I hope many of you will form comparable clubs of your own as I believe them very helpful in maintaining enthusiasm towards training.

By using the routines outlined in Strength and Health and seeking every source of available information on weightlifting and bodybuilding, I was able to make fantastic improvements in both size and strength. Encouraged by the compliments I received on my progress, I started entering the local meets and competed in both weightlifting and physique.

I welcomed the competition for it have me greater incentive and a new desire to better myself. I think it was then I set my goal. I wanted to win the Mr. America title.

Training in one’s backyard is good to keep in condition, but I needed heavier weights and newer and more modern apparatus. I was invited by Lou La Mazzo, proprietor of the Vineland Health Studios, to train at his gym. This was a great psychological boost, for it meant that I had all the modern equipment I needed at my disposal.

Whenever I trained, I was especially impressed by the high caliber of the men I found working out in the gyms and also entering weightlifting and physique contests. Many of these individuals were doctors, lawyers, clergymen, politicians, and people who just wanted to improve their physical condition.

It was not until the late John F. Kennedy was elected President and brought to light his feelings for Physical Fitness, that I fully realized the importance of my training.

I knew then, that if the President of the United States deemed Physical Fitness so important, my goal was well based.

My first attempt to win the Mr. America title was last summer in Harrisburg. As I lined up with the other contestants, I knew I just wasn’t good enough to take the title that year. I finished in ninth place that year, and I considered myself lucky. Many of the contestants had been entering this contest for five or six years without taking the top honors. 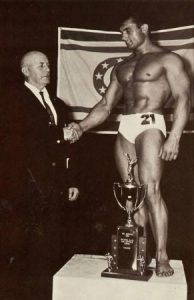 Could I, in one short year, overtake the top seven and take the Mr. America title the following year. The die was cast. From then on I trained relentlessly day after day, week after week, and month after month for one solid year without missing one workout. As June 13th and 14th approached, I patiently waited to see if all my training had paid off. Finally, I was in Chicago and we lined up, posed, were judged, the crowds cheered, and I did it – I was selected Mr. America for 1964. That was the most rewarding moment of my life. I will never forget it.

The men who entered the contest were 39 of the most well developed contestants ever to enter the Mr. America contest. Not only were these men developed physically, but also mentally.

For example, the second place man was John Gourgott, a senior year medical student, third place was Randy Watson, a minister from Tenessee; fourth place was Bill Seno, a school teacher; fifth place was Dr. Graig Whitehead, an eye surgeon and Captain in the Air Force. This dispells the old adage that musclemen have muscleheads. Remember, the mind and the body are psychosomantic. A strong mind and a strong body work hand in hand.

I would like to take this opportunity to thank my many friends for the hundreds of letters and telegrams I received after winning the Mr. America title, and for the encouragement they have given me these many years. Also, thanks to you my readers, many of whom I have never met, for your support.. I promise you that I will try to be one of the best examples of a Mr. America as I join the ranks of those who have gone before me.”