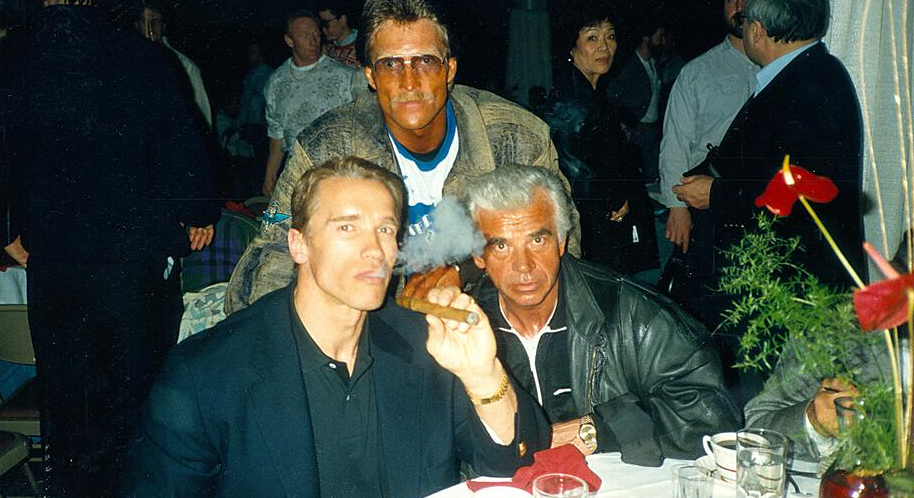 Mathias Busse is a German photographer and journalist. He is doing an incredible job keeping the legacy of German bodybuilding history alive. In 2016, he went to the legendary gym Clocks Fitness in Gießen, Hessen. That gym produced some impressive giants, like Schlierkamp, Rühl, Roland, and a lot of Mr. Germany Champions. 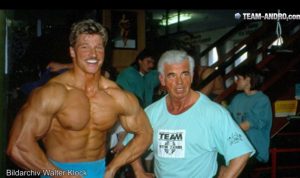 Says Gunter Schlierkamp, “I remember training with Walter. We did pull-ups… and during that time, I was very young. In Germany, people said I should train for some more years and develop some more muscles to get a chance to qualify at competitions. Walter said to me, ‘No, you are already really great!’ I moved from Main to Gießen and trained at Walter’s gym. I was making great progress because Walter Klock told me that I should change some training stuff, and it worked very well.”

Says Roland, “Walter Klock was a huge inspiration for me. Training in his gym with him was like being on drugs. After leaving the gym, you would believe you could fly.”

So, Matthias Busse interviewed the owner of the gym, Walter Klock, and toured his gym. The gym is well equipped and beautiful, and on every wall, there’s a huge collage of old-time bodybuilders, like Kevin Levrone and Lee Haney. Walter exclusively took the pictures, and he said he shot around 6K photos.

So, Matthias sought the answers to his success. Walter’s German stories really play like movies in my mind; it’s hard to give the same impressions in English!

Walter was born in the early 1930s and started running the gym in 1977. It all started in Darmstadt, where Mr. Klock lived. His doctor said to him, “Mr. Klock, you have to be careful. Your heart doesn’t seem to be in good shape.”

So, he started running to improve his fitness. In his hometown of Darmstadt, there is a university stadium with a 700-metre running track, where he trained. One day, he was walking past a room and heard screaming and moaning from inside.

Says Walter, “I heard somebody screaming and thought, ‘I have to go in there.’ The German hammer-throw champion, Klaus Ploghaus, was training there with his colleague. Oh, I was stunned! It was the first time I ever saw a barbell live! I was 47 years old at the time… I was watching those guys working out, all doing the squat exercise, and, at one point, I asked if I could join their training session. People said to me, ‘It’s only for sports students,’ but I didn’t stop asking, and then I was allowed to do squats. I did 90 kg squats without any problems. I slowly increased to 160 kg. It was the first squat I ever did in my life. People were amazed by me, and, after a week, I was back there training. The athletes then said, ‘He’s all right; that’s Walter Klock, he’s allowed to train with us.’”

Matthias Busse asked Walter, “Why is your gym so successful? A lot of great athletes trained under your tutelage and made a name for themselves throughout Europe.”

Walter replied, “It was the joy and enthusiasm for the sport. I loved to work with youth and read a lot—of course, The Sport Revue by Albert Busek. We subscribed to 40 copies every year.” 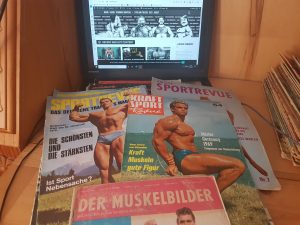 (Note from Site Owner: I am a proud owner of a vast collection of the old Sport Revue series. They started producing them in 1963 with a Steve Reeves cover, then they met the young Arnold Schwarzenegger and included his training method. They would meet future Mr. Germany champions and document their philosophies; furthermore, they included scientific articles. Albert Busek, the editor-in-chief of the magazine, truly worked hard. No wonder Walter Klock’s training principles worked so well!)

Walter continues, “Schwarzenegger already said that everything is a mental attitude. I am enthusiastic about Arnold. I have seen how, in America, all the professional bodybuilders talk so positively about him. The enthusiasm for Arnold is still there worldwide.”

Albert Busek is a pioneer in Germany. He was one of the first to discover and support Arnold Schwarzenegger, long before America and England discovered him. So, Mr. Busek had the vision to open his own gym, and later his fitness academy, BSA. In 1983, Schwarzenegger made a trip to Munich to see this great historical milestone and support Busek’s vision! Everyone knew that Schwarzenegger was there, so the hall filled with 200 gym owners, including Walter Klock.

Walter remembers that day very well and told the story to Mathias as follows: “Then it was very silent in the hall. Everybody knew that at any moment, Arnold would enter the meeting. You cannot imagine the feeling; it was tense. Then the door opened, and Arnold entered the hall. Albert Busek just stepped over to me and asked me to make an announcement for Arnold. Of course, I accepted that great chance.”

Walter warmly welcomed Arnold, greeted him, and made a heroic speech as follows: “I would like Arnold to remain a role model for us, a role model for youth, a role model for the third world. I don’t want him to be pulverized by the media, and if I ask the ethnologists… [whispers to Matthias Busse] don’t know if I’m allowed to say that today… [to the crowd] …then Arnold is one of us. Austria belongs to the German ethnic group.”

Then, at the end, Walter said, “It is our duty to counter all critics who try to belittle Schwarzenegger. It is our task to support him!”

Then Arnold walked up to Walter and said, “Mr. Klock, that’s the most beautiful thing I’ve ever heard in my life.”

Mathias asked Walter about some impressive bodybuilders who made a great impression on him. Walter replied, “Andreas Muenzer, Albert Beckless, and Lee Haney are valuable people, but I love all bodybuilders. When I know someone is doing some bodybuilding, I think, ‘That’s just beautiful.’ You must acknowledge your roots. I have been bodybuilding for 44 years. I have not spent a day without bodybuilding. I got up in the morning and went to bed at night thinking about bodybuilding. The German bodybuilder, Dr. Detlef Herget, is the same way. He came to me when he was 15 years old; today, he is 54 years old, and we developed a deep friendship. We had a relationship like father and son. On his 50th birthday, I said, ‘You are a great and loyal friend to me.’ Idealism is the power of all the money together in the world. When you get up on Sunday morning and see a man with 4-5 young kids, and he drives them to soccer training… if these men no longer exist, then there is no club. There is nothing. Idealists must be encouraged. The nice thing is when an idealist gets something going, and something works.” 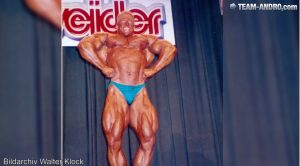 Matthias Busse asked about Markus Rühl in his early days. Walter said, “Oh, yes, I saw young Rühl in training. I was thrilled; it was unbelievable. At the German competition Großer Preis von Hessen, Michael Stephan beat Markus Rühl. The judges told me during the break, ‘Michael is in the lead.’… I just said, ‘Oh, no, this is a disaster,’ and so it was; Michael took first place. That was unforgettable. Markus’s supporters demonstratively left the hall. In the evening, I called Markus Rühl and said, ‘It was not so tragic. In the near east, Magdeburg, the International German Championship, will take place.’ I said, ‘There are other judges there, and it’s a whole new situation. Go there.’ Markus told me that he was busy; he must continue his professional training. I talked to him for half an hour… I said, ‘It’s not professional.’ Markus did not go. Later in Las Vegas, we met again, then he said to me, ‘Walter, you were right then. That was not professional at that time. I should have gone to Magdeburg.’ Michael Stephan had gotten diarrhea and a cold. He took a lot of pills and was in bad shape, and Markus Rühl was not there.”

Mathias Busse asked, “You were born in the early 1930s, right? So, are you still lifting weights today?”

Walter replied, “I don’t train heavily anymore, but I still train from Monday to Friday for one-and-a-half hours each day. I have weekends off, and on Sunday, I go to church and pray that the boys get muscles.”

Matthias asked, “What advice can you give to the young people on the way up?”

Walter replied, “Be joyous and don’t let yourself down. Nowadays, you see very often that young people grow up in a harsh environment, with the big drug problem nowadays, and the many accidents and crimes… and I think you must get the kids off the streets. Andre Lotz once said, ‘It was good that Walter came to Darmstadt,’ and then he listed a few people who would otherwise have ended up in prison. One of them was 14 and already had a criminal record and had never relapsed. I’ve been to a court case myself, and the judge said to me, ‘Since he’s been working out at a fitness center, he’s been very exemplary.’ That’s what matters, and it’s especially important to me to get young people off the streets.”