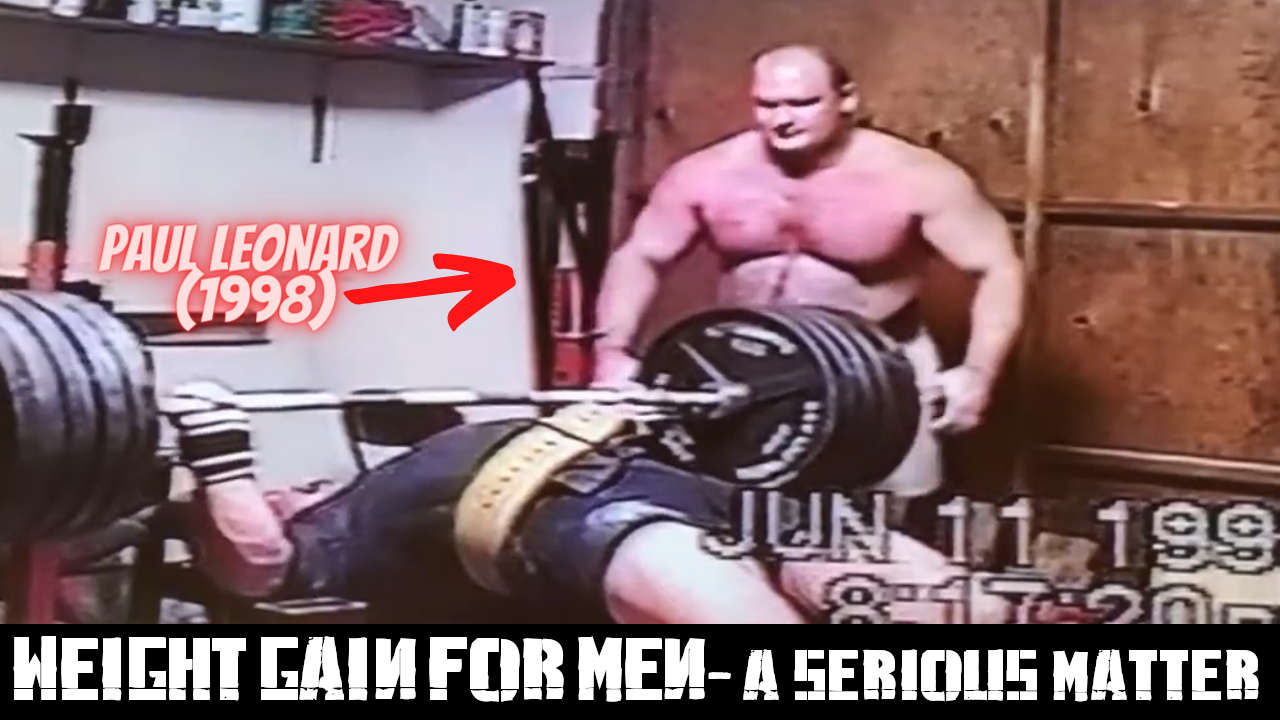 I was born premature and weighed only 4lbs and 6 ounces. As I was born to a Catholic family, I was given my last rites and named Joseph in the event I died, which I did not. Once I stuck around I was renamed Paul. I had a normal healthy childhood, loving playing baseball, swimming, building forts and always with lots of friends and activities. I loved to climb trees and I can recall running around day in the summer until my legs would ache when I came home to eat and sleep once it was dark. I ate very well growing up with my mother feeding us well and my grandmother living in the same building as us so two of every meal was the norm for me and I entered junior high school as a chubby kid.

I loved to eat healthy food as well as junk food. I was a paperboy and made my own money that I spent on baseball cards and snacks at the local convenience stores. Candy, slushes, and soda pop was consumed in between meals.

Once in high school, after having been beat up and jumped more than I cared for commuting by busses and trains throughout Boston, I decided to build myself up by lifting weights and eating better. I had no one to teach me how to lift the first year I did, but I recall the 110lb cement filled weight set I received from my parents in 1982 came with a booklet to follow.

I began to lift weights with my high school football teammates and became a starter on the varsity team at 6’2” and 215lbs. I loved to eat while I was in high school and worked part time jobs that made it possible to eat lots. I worked for Burger King for 4 months and ate Whoppers, then I worked at a nursing home in the kitchen where food was plentiful, followed by a stint with a local pizza parlor at which I ate a pizza every day I worked, covered with extra cheese, gyro meat as well as meatballs and sausages. I walked a lot in high school as my parents wouldn’t let me buy a car until I graduated.

I began powerlifting in earnest as soon as my high school football career ended and by then I began reading strength and bodybuilding magazines like Powerlifting USA, Ironman, Muscle and Fitness, Musclemag International, Muscular Development, Flex, MuscleTraining Illustrated, and some books as well.

I realized the importance that nutrition played in building muscle to lift heavier weights. I also began to use supplemental protein such as Weiders Muscle Builder and GNC’s store brand. Most of my diet was food.

In college, with more money and fully obsessed with getting as strong as I could get, I began to eat more food and supplements. I flew down to compete in a huge competition in Maryland and came in 2nd to a beast named Shawn Colbeth who became a Collegiate National Champion and his ass kicking of me opened my eyes to how intense a person could be on the platform. I was 19 and squatted 515 benched 315 and deadlifted 560 in the 242 lb class. Shawn did a 600lb and deadlifted 600, benching 480. We wore single ply gear and were drug tested as this contest was sanctioned by the American Drug Free Powerlifting Association (ADFPA), which today is the USAPL, the U.S’s IPF affiliate.

The ass kicking did not deter me at all, rather it spurred me on to train as hard as I could. I followed Fred Hatfields Programs from Muscle And Fitness as well as did Dr Ken Leistner’s workouts. I once squatted 315 for 20 reps and then passed out on the toilet for about 30 minutes afterwards. I did meets in the 242 and 275lb class in 1988 and 1989. In 1988 I began working for GNC as a sales associate while in college. I sold tons of supplements and was allowed to sample everything GNC sold.

I worked for GNC for over two years. I would work alone so I could not leave to eat in the mall I worked at so I became heavily involved in eating supplements. It was not uncommon for me to eat 50 amino acid capsules or tablets along with the same amount of desiccated liver tablets in the same 4 hour shift. I often worked 5 to 9 pm close. There were no ready to drink protein supplements at that time, but I would bring a quart of milk with me to the job and we had single serving packets of protein powder to mix in. Protein powder then was primarily calcium caseinate.

Some of the brands I hammered then were Universal, Unipro, Hot Stuff, Twinlab, MegaPro,and at times GNC’s competitor Nature Food Center’s store brand. I ate everything I could get my hands on and I just got stronger, with my powerlifting total going up from 1250 at 18 to 1600 at 21 and 235lbs. What I did not gain was a great amount of bodyweight in those 3 years. What was missing was food! 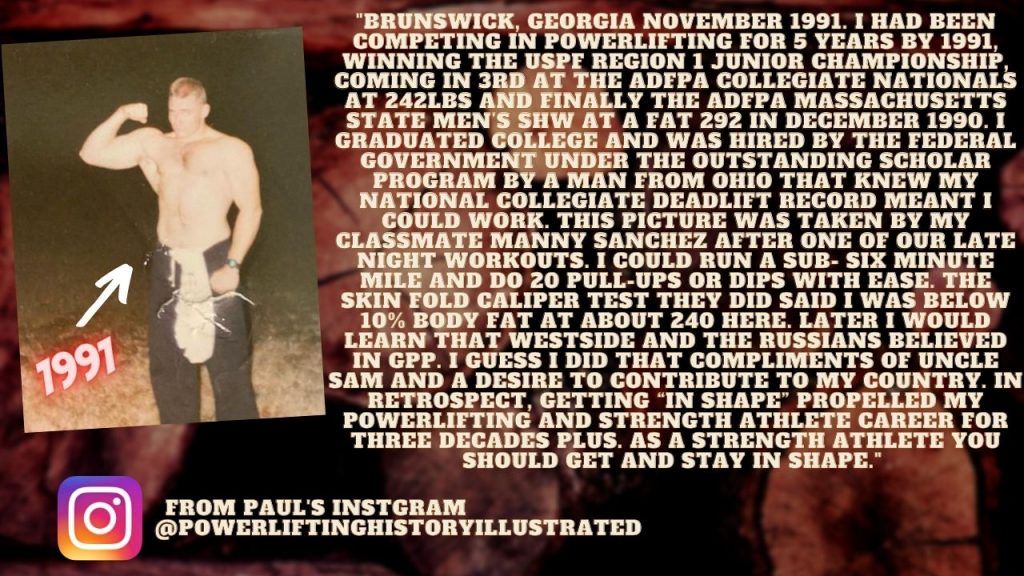 I graduated college and moved to Southern California to begin my career. I had to meet certain physical standards to include a mile and a half in a fast time so I maintained a weight of 220. In 1993, I was established in my career and determined to pursue my powerlifting goals. I also began Westside Barbell style training, which was higher volume an intense pace that put me in great shape but I couldn’t get past 262lbs after a year.

Enter the food in 1995. After finishing 2nd in the 275 lb class in the 1995 USPF California States with lifts of 661 413 705 at 262lbs, I settled down personally and got married. My lifting goals were now around getting as large and strong as possible- no longer was my focus just on strength, I wanted to get as muscular and big as possible.

I had a fantastic training crew and a supportive wife who cooked for me and gave me all the sex I wanted. No other iron game writer other than Bill Starr ever wrote about sex and the barbell, but I will say it- I had lots of sex since I was 16 and even more after I got married. Nothing made me grow like great training, real food and sex before bed or after a great workout.

Between 1995 and 1998 my body weight went from 262 to 325, with my lifts going to official lifts of 771 480 744. The keys were this: Sunday was food shopping day and a day off the gym. Often times I would get up and eat a breakfast at home like eggs, milk, pancakes, toast, and some fruit. Sex and then back to bed again for a few hours. My wife and I would then go to brunch, there was a place in So Cal called Charley Browns that had a great brunch.

I can eat insane amounts of food, if I keep changing the type of food. Prime rib, lobster, shrimp, Turkey, potatoes,rice, you get the idea. This restaurant served NFL brunch so while an NFL game played, my goal was to eat at least one huge plate of food (1000 calories) for every quarter of the game. At home after brunch either more sex and a nap- in the summer in my pool or inside during the fall. When it got dark we would go to the supermarket and spend our 300 dollars for the week for the two of us. My wife never weighed more than 110lbs until she got pregnant but she is a great cook and ate very well too.

After Saturday’s training we would go to Rocky Cola Cafe in Uptown Whittier to eat off both the regular menu and the health food menu. I would eat egg white enhanced French toast, a peanut milkshake made with Metrx, then I would eat a Buffalo meat burrito and wash it down with an apple pie Metrx shake.

I would drive home and grab the wife for sex after a shower then a nap in my pool or while watching college football. Nighttime involved a dinner out, often times at Black Angus Steak house or at Claim Jumper- getting a dinner called the Ore Cart which had over 5,000 calories of meat and sides of stuffed baked potatoes. Desert was often Golden spoon Frozen Yogurt, as I was a member of the quart club- buy 9 and the tenth was free.

During the week day, I had to work but I would eat in accordance to my goal. Breakfast was always a steak, eggs, orange juice, milk, and bagels with peanut butter. I would always have food with me at work. I love nuts, peanuts, almonds, and Arnold’s favorite- cashews. I would often drink milk- up to a gallon per day on days not in the gym, not as much as gym days as I did not want to feel lactose sluggish.

I drove 42 miles,one way to work, so I knew all the places to eat along the way if I got hungry. I would eat El Pollo Loco Chicken, Rubios, Jamba Juice, Togo’s, and other local restaurants. I ate almost zero fast food.

I had a few local restaurants that really helped me out. La Salsa at the Glendale Galleria had a sweet lady named Maria would would make a burrito as big as my 17” forearm loaded with steak, rice, and cheese. Chuys in Glendale offered a lunch buffet that was amazing. All you could eat tri tip roast and mesquite grilled chicken for 9.99 per day! Host Ted and server Katarina became fast friends and appreciated how strong and big I got.

At the time there was a famous picture of Professional Body Builder Lee Priest eating KFC to bulk up. I would do the same occasionally, but I would throw away the covering as to digest all that fried shit would have slowed me down.

Every 12 weeks I would go to Lindberg Nutrition at the Del Amo Fashion Center in Torrance with my wife. I would buy creatine, glutamine, amino acids, whey protein- Designer Whey, desiccated liver, and ultimate orange for energy. I would take 20 grams of creatine, glutamine, BCAAs, prior to and half way through each workout. After my three weekday workouts, my wife would have dinner for me when I got home and before bed I would have a pound of yogurt with whey protein mixed in it with some ovaltine. I slept for about 7 hours per week night and more on the weekend with naps whenever I wanted as I had no kids then.

I had an amazing physician who supported my goals and monitored all my blood work, blood pressure, cholesterol, and key indicators such as liver enzymes and kidney function. If I had not been healthy, I would never have gotten as large and strong as I did. When I began competitive strongman in 2001, I ceased trying to gain weight and I began losing body fat I had gained when I gained 60lbs in 3 years. That was over twenty years ago and I am as healthy as ever at 53.
I hope you understand that I was able to gain weight and strength for one reason: I loved the process and I would do it all again.