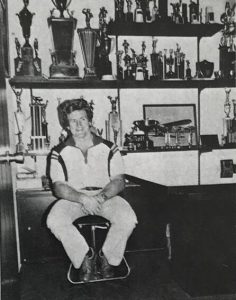 The following workout routine was developed by Mr. America Winner Lloyd Red Lerille. He was born in 1936 and is a New Orleans native. The winner of numerous bodybuilding titles, including Mr. New Orleans in 1955, Mr. Armed Forces and Mr. Hawaii in 1958, Mr. Dixie in 1959, and AAU Mr. America which he won in 1960. Red served in the United States Navy from 1955 – 1959.

Wrestling was Llyod’s favorite sport and until his freshman year of highschool he really developed an interest in weight lifting and bodybuilding. It was during this year that he started his wrestling career. He met a man who has inspired him more than any one he knew. He was Brohter Melchior Polowy, coach of the Holy Cross Highschool Team. To prove Brother’s coaching ability, the team has never lost a state wrestling championship.

Like many young men coming out of high school Llyod’s future was undecided, so he enlisted int eh Navy. Two weeks later he found himself out of boot camp and back into wrestling again. For the next nine months he did fairly well, placing second in the All Navy wrestling championships. It was during this time that he really learned a lot about training for wrestling, for he met some of the best in the country and talked as many of these wrestlers as he could.

According to Lloyd the only was one can learn to wrestle is to wrestle. But after one has learned a great deal about wrestling, he will then have to rely on speed and strength to improve himself.

Weight lifting and wrestling go well together. Both are great body builders and strength developers. By combining the two a person can develop a fine and useful body.

Lloyd wrestled three day a week and worked out with weights three days. He also liked to get one or two games of handball in each week; He finds that this sport helps the reflexes and is a good conditioning exercise. Some days when he thought he needed a change, he might have skipped the wrestling or weight workout and spent the time on the handball court.

Wrestlers are always watching their weight. Every wrestler would like to get into the lightest possible class, or the class in which he feels he can do best.

Lloyd tried to follow a diet rich in meats, fruits, and vegetables, eating very little of the other foods. On the day of a match or a tournament, he tried to eat at least four or five hours before his match.

He liked an empty stomach. “Lean and mean” is what they called a man in good shape looking like he hadn’t eaten in two days. As a rule it is always the lean looking man who is the meanest and does best in wrestling. Lloyd’s advice to anyone who is training for wrestling is to get into the lightest bodyweight class he can make, yet keeping all of his strength. He will find his speed and endurance will be at its highest at a lighter bodyweight.

Running is also another good extra to add to your wrestling workout. It really improves the endurance. He found running most effective when used just after his wrestling workout. He usually tried to run about two or three miles after each workout, varying the pace:

Rope climbing is another exercise you can do for a lot of good results and loads of fun too. When he wrestled in the Navy, they would always take a little out for rope climbing, dipping and chinning contests. These little extras always help, even if they are just to add a little variety to workouts.

He outlined a routine which he has found to be one of the best to follow during the wrestling season. If you practice wrestling every day, try to do part of the routine each day. If you wrestle only three times a week, which he thinks is enough, try to use the routine at least twice a week.

Keep the reps low in all your exercises unless you have a weight problem and are trying to cut down pounds. But if you are the average man training for wrestling, her would advise you to keep the reps around 6 or 8 on most of the exercises. 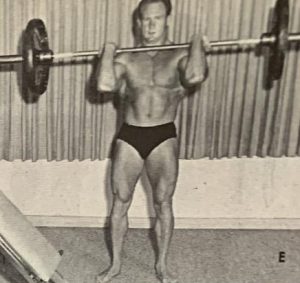 Clean the weight to the shoulder and press overhead. Choose a weight than will allow you to get about 6 reps. When the weight becomes light, add more to the bar. This is a great one for shoulder and arm strength. 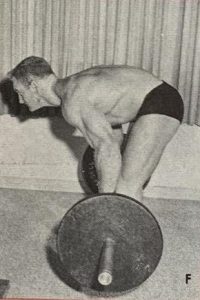 Use a medium grip and pull the weight into the waist. Be sure to get a good stretch on each rep by going all the way down. Keep the reps low on this one also. This exercise does plenty for the upper back and arm strength. 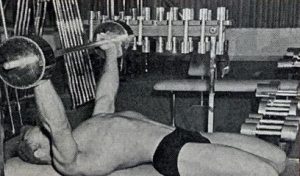 The bench press is very good for the wrestler who finds himself on his back often. Use a medium grip and keep the chest, shoulders, and arms, and develops strength in these parts. 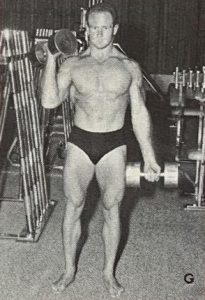 Try to do this exercise as strictly as possible; either barbells or dumbbells can be used on this one. Every wrestler need good strong biceps, and this can give him just that. 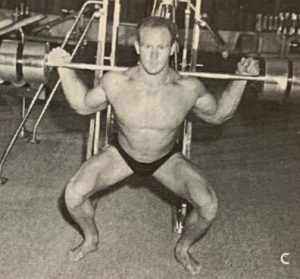 This is an over-all developer and is a must for the wrestler. Keep the reps high for the squats; about 10 to 15 should do the trick. This is the finest exercise for developing hip and thigh power. 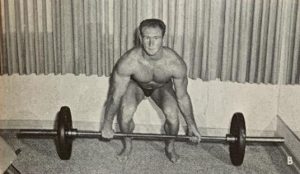 Try to use as much weight as you can in the deadlift and keep the reps low around 5 or 6. Great for building power in the lower back and hips. 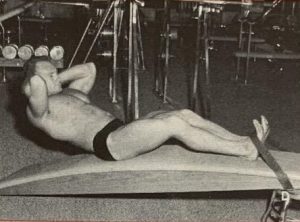 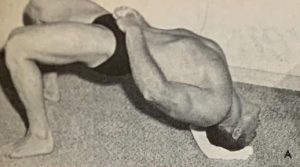 The neck muscles are the most important muscles the wrestler uses. For proof of this, just look at anyone who has been wrestling for any length of time. You will notice he has a very outstanding neck development. This exercise develops the back the neck. You can hold a barbell in your hands when it becomes easy. Go all the way down until your back touches the floor and them come up and try to touch your nose on the floor. Do about 10 reps. 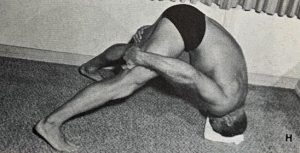 This is almost the same as the wrestler’s bridge; you just change direction. The front bridge works the front of your neck and also the sides. Rotate around touching the back of your head, then to each ear. About 15 reps will do.

Editor’s note: Use the tag-system and click the button “wrestling” or “Mr. America” for more training articles developed by champions! – Mr. Berg