What Value Are Cables to The BODYBUILDER 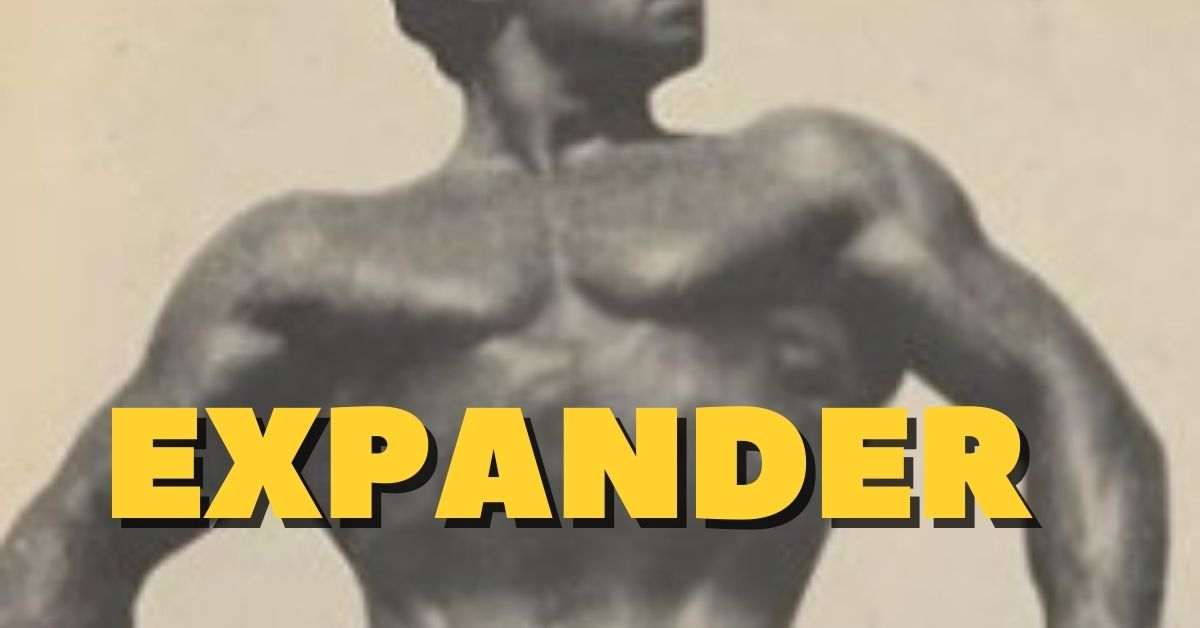 By the way, last week I read a german book called ‘Arnold Hautnah’ (it was written by close friends) and even Arnold Schwarzenegger used the chest expander as a youngster!

Article was written in 1947 by Mr. Theriault!

“What value are cables to the bodybuilder? This is a question that we have been asked a good many times. So it seems that very few enthusiasts realize the true value of an exercise system that is second only to the dumbbell and barbell system.

All three together will build the finest and strongest physique that a bodybuilder can wish for. John Grimek, Leight, Sansone, Siegmund Klein, or Jules Bacon, have all made good use of cables at one time or another and this goes for every outstanding bodybuilder you could mention. The sales of cables here are second only to the weights and from the letters that we receive each day at our office from these pupils, concerning the wonderful achievements that they have attained, we feel that an article on cables is in order.

As a rule pupils come in two classes: 1. The pupil who wants to build his physique to the highest degree possible.
2. The pupil who wants only to keep fit; usually this individual is a traveling salesman or is on the stage, (as is the case of many of our pupils) and is traveling and does not have the facility of carting his weights around with him.

For both of these individuals cables can be of great value. In the case of the first pupil who wants a Hercules physique, with a fourday program each week he should be able to build his upper body to an almost maximum development.

In the case of the second individual, with only a few hours workout each week he will be able to keep in top condition. I can assure you that cables will be of a great importance in your arm development.

While I was in the Canadian Army my arm measurement increased from 15 1/4″ to 16″ (cold) in 18 days and under trying conditions as I was going to through some pretty tough army drill during the day and had night manoeuvres at least three nights out of every week. A part from your arms, cables will build up the deltoids, trapezius, pectoralis, and the latissimus into the size and shape that you want them to be.

For an example of magnificent pectoralis development from cables take Earle Leiderman, from his photos we have seen the finest set of chest muscles that any man could hope for.

Great importance is stressed in the proper positions of the arms in cabkle pulling. The arms should be perfectly straight and locked at the elbow each time the cables are stretched.

If you are unable to do this with three strands you should take one cable off; or if two strands prevents you from performing an exercise properly, use only one strand.

Of course this is only common-sense but many a fellow has not received the results that he should after one or two months of training for the simple reason that he did not know how to perform the exercises properly. Muscles must be worked to the fullest extent to receive the best results.

The arms should be fully extended or completely flexed as the case may be. Never start a movement with a jerk.

In allowing the cables to return to their original position keep a strain on them and make the return movement as steady as possible.

In each exercise use the amount of cables that enables you to repeat the movement six to eight times, increase the amount of repetitions as your strength increases until you reach the count of fifteen; then increase one cable and lower your count to six again and so on.

Our first exercise is the one arm curl, palms up. This movement is for the biceps and one of the finest exercises there is for this muscle. Place your foot in one handle of your exerciser, grasp the other handle with your hand and without allowing the elbow to move either backward or forward, curl the hand up to the shoulder as in the illustration above then lower the arm to its fullest extent to the side. Same with both arms. 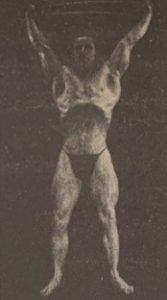 This exercise is for the latissimus muscles that extend from the deltoids to the oblique muscles on each side of your upper-body.

Take each handle and reach overhead. Take a deep breath and pull the cables apart and down until the strands extend across the back.

Exhale during the downward pull. This movement will give your upper-body that V shape that is so admired. 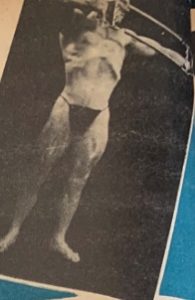 The archer’s movement. One of the best triceps developer that has yet been found. It is by far the best cable exercise for these muscles. Grasp the handles in each hand, holding the cables across the chest, from this position have one arm straight to the side and the other bent in almost the same position as an archer would with a bowstring, as above.

Hold the extended arm firmly and stretch the other to full length. After you have pulled the cables with one hand extend the other and do the pulling with the opposite. 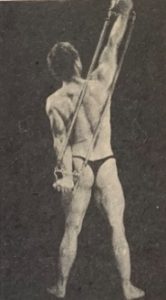 This one is for the triceps (on the back of the upper arm) and the deltoids, the shoulder muscles that give you that “broad as a barn” look.

Some call this movement the one arm press and that is precisely what it is. Hold the cables as at left, then stretch the cables until your arm is completely straight overhead. Same with both arms. 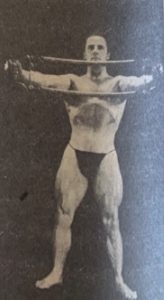 Our next exercise is an excellent trapezius developer and also plays an important part in developing the deltoids at a point close to the trapezius; this will give your deltoids a very wide appearance from front to back. Hold the cables in front as shown in the illustration and pull them back in a quarter circle until the cables are across the chest. In all these cable exercises you should inhale while exerting the muscles in pulling the cables, and exhale as the cables are brought back to the starting position. 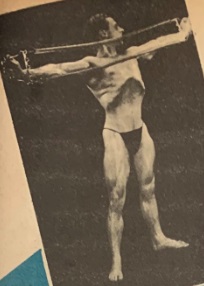 This movement is called the front chest pull. Hold the cables across the chest. Take a deep breath and press the cables to arms length at the side, in line with the shoulders, as shown in Fig. 6.

Hold the arms locked for a moment, then slowly come back to the original position. Make each movement count by resisting the cables at all times during the exercises. 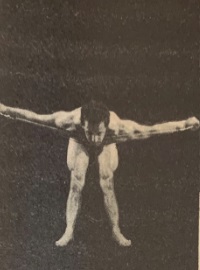 In this, the 7th exercise, grasp the handles palms in, lean over from the waist with the arms hanging down straight from the shoulders, take a deep breath and pull the cables across the chest as in the front chest pull, hold them there for a second then slowly resisting the cables come back to the starting position. This is a fairly difficult exercise so do not use too many cable to start with. 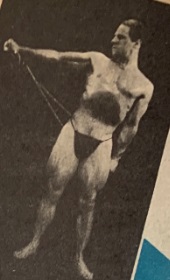 Here we have another shoulder exercise. Hold one arm straight overhead and the other against the buttocks, now lower the straight arm to shoulder’s height (resisting the pull of the cables throughout) then, again raising the arm to the overhead position. Same with both arms. You need not be afraid of all these shoulder exercises. The deltoids have many beautiful curves to develop and the more the exercises for them vary the better. 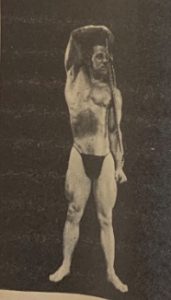 Here we have another wonderful triceps exercise, one which will give you all the results you want if you put enough energy in the movements. Hold one arm straight to your side with the elbow locked, (handles grasped palms in) have the other arm behind your head as at left. From this position pull the cables with the bent arm to the straight arm position overhead then back to the starting position. Same with both arms. 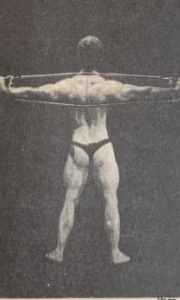 The last exercise is a triceps and deltoids developer. Stand erect with the cables across the back and palms turned out. Now start forcing the cables straight out to the sides and continue until the arms are straight and the cables are in line across the shoulders.

You may keep the cables pressed against your back and carry the hands slightly to the front as you press out. Make the movements steady and even with both arms, breathe in as you press and exhale as you come back to the original position. Best of luck.