He is a very nice guy and currently became father. He could beat up your dad with one punch!
His Strength Level:

If you dont know Zitronenquark then you have to know him! He has got a youtube account and he is used to uploading intense work out videos. If you watch his videos you will think he is harsh or grimly but he is a very talkative and smart guy.

In this Video he is talking and philosophizing about steroids and genetic limit. He said there is much envy and ill will in powerlifting. The most people still haven’t learned how to train hard or haven’t reached their genetic limit. Despite benchpressing only 140kg or deadlifting 200kg only. Thus they start injecting steroid. That’s sad.

From another point of view, he has been pointed out that most people think “oh he managed to benchpress or deadlift more than me, that means he must take heavier dose than me. And i have to increase my steroid stack so i will be stronger than him”. Instead of being honest and saying “your mindset and genetic is greater thats why you are stronger than me”.

That mindset is dangerous and carries a lot of envy. The greatest respect you can earn is self respect! Hard work, genetic, bone strength, muscle strength and fast twitch muscle fibres are factors which means the difference between 1st and second place, or winning and losing and not your steroid stack. 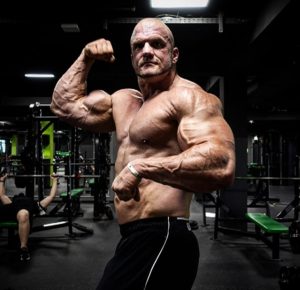 Since 8 years he is used to uploading great work out videos. In these 8 years he had the opportunity to sell overpriced training programs, whey or boosters but he never did it. Zitronenquark does not care about money. A user of Team-Andro.com sent him a coaching request. This was friendly rejected, because in his opinion you can’t train “orderly” enough in the homegym. He could also simply accept any request and simply collect the money, but he does not. This german guy is real. He lives and breathes this sport.

Now i want to talk about his training routine. He does not care about Systems like Jim Wendler,5×5, Texas Method(..). He is used to warming up and doing one 1-set. And in this one set he is going to be in a rage. According to Zitronenquark if he does a second set he will have a nervous collapse”. After this heavy one set he is used to lowering the weights and is just pumping. That’s his routine. And it worked for him.