Today I would like to tell about Hermann Görner. He was a famous Strongman from Germany. He performed in many countries and he is known as „Stärkster Mann der Welt“ the strongest man to ever walk the earth! He had a crazy grip strength. Hermann deadlifted 330kg/52stone/727lb with one hand! 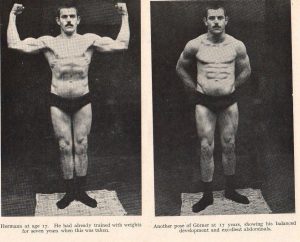 He was born in the 1891 in Leipzig, Germany. That means he lived in the pre steroid-era. At the age of 10 he started training. Together with his brother Otto Görner and Otto Brauer they founded a sport club and appeared first as “Atlas Trio” and later on as “Strongfort Trio” in Saxony-Anhalt. Throughout his strongman career his weight was around 264lbs and 293lbs at a height of 6’3″. 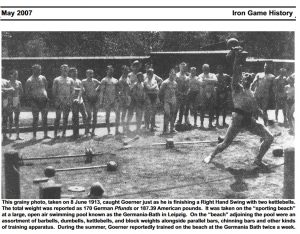 Furthermore Hermann used to boxing, wrestling and swimming. He was also an excellent chess, billiard player and pianist. In 1921 he was able to make a living with strongman acts. He performed in many theaters, vaudeville and circuses ( e.g. circus bush, pagel’s circus).

1914 First World War broke out. A conflict fought between industrialised countries equipped with modern weapons. It saw the rise of mass destruction weapons such as poison gas flamethrower, and shrapnel. Hermann served in WW 1 and he was hit by more than 200 pieces of metal shrapnel. 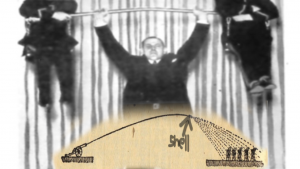 That weapon of war was invented by Henry Shrapnel. He was a British Army officer. An anti-personnel shell which carries a large number of small bullets .
These small bullets have a weight of 17gramm. The enemies were in a real rain of bullets and many enemies died instantly but some survived with serious injuries. Over nine million combatants and seven million civilians died as a result of the war.

The First World War seemed to put an abrupt end to his athlete career. But Hermann survived the rain of 200 bullets. He had to undergo numerous operations. A surgery removed most of the shrapnel from his body, but not all. He never stopped working out despite being injured by shrapnel and losing an eye!
This man was a total beast!! 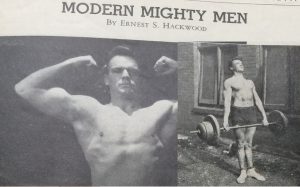 Ernest Hackwood, is an Englishman who served and was wounded in the war, lived in Canada and used to write for the oldschool magazine “Strength and Health”. He met and talked to Hermann Goerner. He wrote an article “Modern Mighty Men” and the following text is an excerpt from this magazine.
“During fifteen or more years of experience in the physical culture field it has been my good fortune to meet some of the world’s strongest men, both in Europe and America, and I am sure that a description of these men and their feats will prove both educational and inspirational to the younger enthusiasts of today. The greatest thrill I ever had was on being introduced to the mighty Hermann Gorner, at that time considered the strongest man in the world. It was on the occasion of a great strength show in Sheffield, England, sponsored by the “Health First” Association and the Sheffield Weightlifting Club of which I was then Hon. Instructor, and at which appeared such champions as W.A. Pullum the 126lb. Champion of the World, C. F. Attenborough, the 168 lb. Champion of Britain, A.P. Mead, the famous muscle control artist and several other record holders. 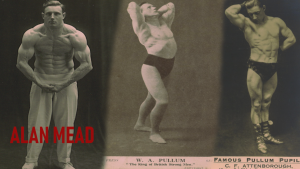 Previous to the show I had been informed by Mr. Pullum that in all probability the great Hermann Goerner would accompany him so that I was all agog with excitement at the prospect of meeting the strongest men in the world. After getting all my work done in connection with the show I rushed out to the door of the hall there to await the arrival of the “miracle of might.” Glancing up the street I espied a group of well set up athletic looking men, but conspicuous amongst them was one who stood head and shoulders above the rest and at last I was within sight of the “Modern Hercules.” As he came closer I could not help but gasp and mutter to myself “what a man.” My heart beat faster and I prepared myself for the introduction. “Mr. Hackwood, meet Mr. Goerner, the strongest man in the world.” My mind went back to many articles I had read of his exploits and feats and with fear and trembling I put out my hand expecting it to be crushed to a pulp, but in an instant I was reassured that such would not be the case, for as our hands met I felt a firm pressure without any unnecessary force, and I sighed a breath of relief. Hermann Goerner was not only a strong man but he was also a gentleman and I was mighty proud to have met such a splendid representative of the Iron Game. A short time later I also had the pleasure of meeting Mrs. Goerner, a sweet and charming lady, who I am sure could have laid claim to the title of “the strongest woman in the world.” She assisted her husband in many of his strength feats during his vaudeville performances. Realizing that one does not get the opportunity to meet the strongest man in the world every day, I made the most of the occasion and talked with him for quite a long time and I found out that Hermann Goerner had no secret methods, but was willing to give me all the information I desired. I found out that his training had been done with barbells and dumbbells and that he started in at the early age of fifteen and was a great believer in the use of heavy weights. I could hardly realize that only six years previously we had been fighting against each other in the world war, he in German Army and I in the English Army and now we were talking to each other like old friends. But such is the value of athletics in cementing international goodwill and wiping out racial antagonism and hatreds. At my request Hermann stripped off to the waist and immediately there was a gasp of astonishment from the people around. It seemed as if one of the ancient Gods was come to life again, no knotty muscles, but huge mounds of flexible steel like muscular tissue, each part seeming to mold itself into the other. A veritable study in anatomy, the massive biceps with equally proportioned triceps, beautiful pectorals surging across to the wonderfully developed deltoids, tremendous forearms, and a back development the like of which I had never seen before and have not seen since. No wonder Herman was capable of lifting well over 650 lb in two hands dead lift.” 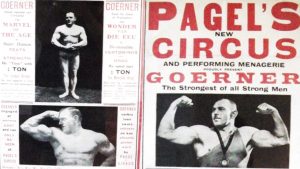 Hermann Goerner was a international Star. He was touring countries such as Germany, Britain and South Africa. Herman Goerner’s sponsor for many of his South African appearances was the Pagel’s Circus. 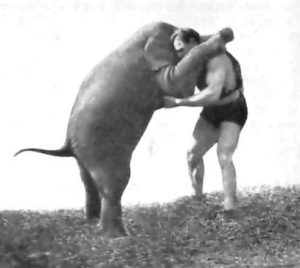 You can see this photo was taken in south Africa. He is wrestling against an elephant and that was his work out!! At the beginning the elephant weighed 700lbs but by the end it was over 1,500lbs. Later he married Elsie who joined him as a partner on tour with the internationally renowned Circus Pagel by England and South Africa..

How strong was Hermann Goerner?
Goerner’s Book “Goerner The Mighty claims all of the most important Goerner’s record. This book was written by his close friend Edgar Müller. 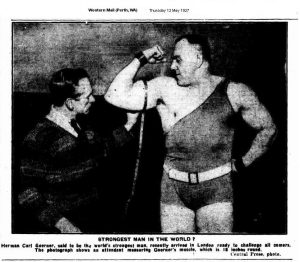 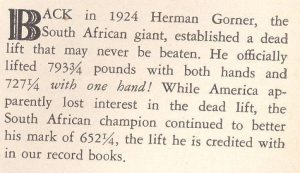 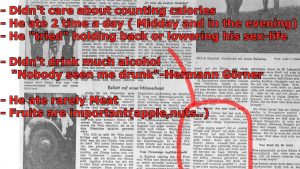 His eating was equally as simple as his training. He ate rarely of meat. He didn’t care about calories or eating every 2-3 hours. He is used to drinking beer and sometimes eating good food like beef, Wurst (German sausage meat). He ate potatoes too. He loved eating nuts- especially walnuts–and all fruits: apples especially, which he thinks every strong man should eat, as well as oranges and other citrus fruits. Cheese and eggs also figure in his diet, but he does not care for rich pastries nor does he drink milk in any quantity.

Training Routine
Interesting that he used to sprint in his training routine. He cared about explosive power. His training seemed to be less conventional. He was able to sprint 100 meters while carrying a 110lbs kettlebell in each hand , in 18.4 seconds!!

Furthermore he was an advocate of instinctive training. He lifted heavy weights but Hermann always trained as the mood struck him. He squatted very rarely. He managed to squat 600lbs, front 500lbs. For the grip strength he trained about 15 grip variations. Görner lifted heavy barbells and dumbell with one hand or three fingers to increase his grip strength. He always varied his workout and mixed his work so much.

Many German gyms were not only places where you went to improve strength, health and muscularity. They were also social centers, places where friends met, where you took your wife or girlfriend. Görner’s Gym was attached to a pub or beer garden. After training he used to go to the pub and drink a German beer. 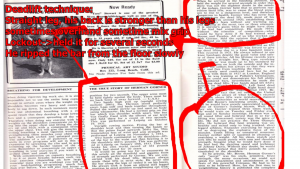 According to this article, Hermann always made these lifts in strict style. He never slid the bar along the legs or rested it on his knees. He always took it from an almost stiff legged position to erect position straightening out without the slightest difficulty. Sometimes he used an overhand grip–sometimes a reverse grip. When he arrived in the finishing position, he held the weight for several seconds in order that there was not the slightest doubt in the minds of the judges. Gorner held that to perform repetition dead lifts, was to cause the blood pressure to rise to a dangerous level, and therefore dangerous to health. Goerner who has never had a contest on the dead lift, made most of his terrific records around 1920, establishing these extraordinary feats without any warming up, and making at the most , two or three attempts.

During World War 2, Goerner was for a time held in a concentration camp because of his membership in the worker’s organization. His beloved wife Elsie died.
After 1945 he was welcomed as a refugee in Klein Heidorn, wunstorf. According to this newspaper article, he’s almost blind. He lived in a refugee house lonely and he has been forgotten by his homeland. Herman Görner lived to the age of 65 before passing away in 1956. 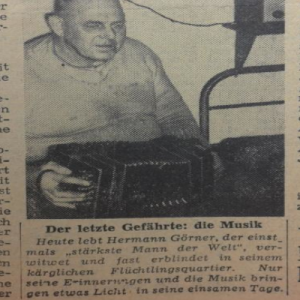 Hermann survived 2 world wars. Lost his eyesight and his beloved wife. But he will never lose his status as the strongest man in the world. He was known for his strength, especially his grip. After decades he is still a topic of conversation. He is truly a legend.