Yury Vlasov – is He The World’s Strongest Man? 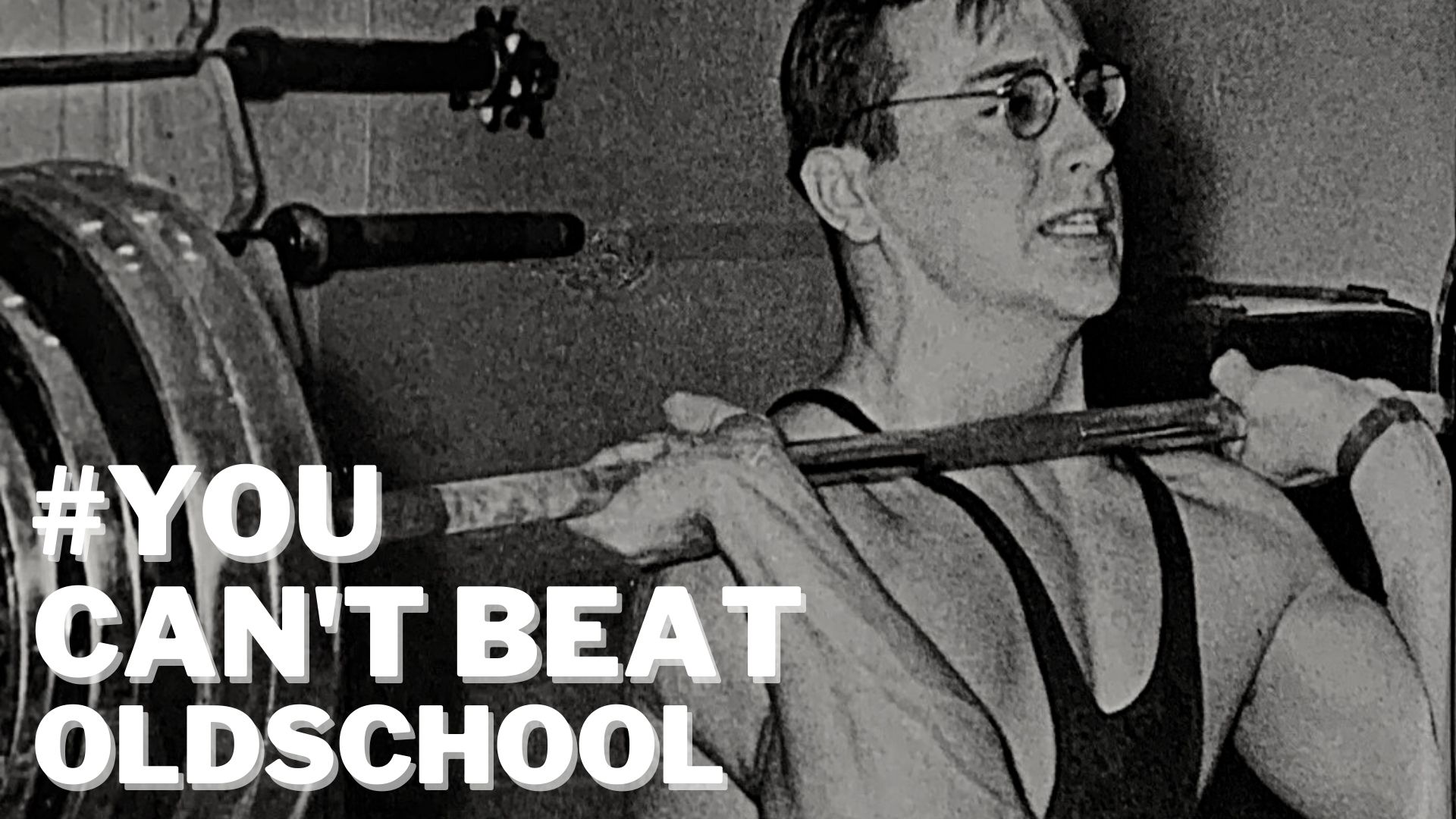 YURI VLASOV – IS HE THE WORLD’S STRONGEST MAN?

I was staggered when world’s heavyweight weightlifting champion Yuri Vlasov of Russia asked me that question. What could the man be thinking? He had yet to make his 1,185 pound Olympic total nevertheless I answered cautiously; “It may be possible but not very probable.”

Among my many enjoyable experiences in Rome was talking to the lifters from all over the world during their training sessions in the big gym at Aqua Acestosa.

I willingly gave up the opportunity to watch other events such as gymnastics and swimming of which I am particularly fond, to chat with strength athletes and exchange ideas with them.

I have always believed in getting close to the competitors and getting first hand knowledge of their problems and ways of thinking. It was in doing this that I made the acquaintance of Yuri Vlasov.

I wanted to interview Vlasov but I do not speak Russian; I claim no knowledge of that language, but imagine my pleasant surprise to learn that Vlasov was one of the few Soviet lifters who could speak French!

In that language we were able to converse. I count this interview with the man who has since made the world’s highest total a great moment in my life. I count Yuri as a new and valued friend.

Unlike some of the more temperamental lifters, Vlasov was not averse to having people watching him train and he gladly chatted with me. I sat there enthralled at the fabulous poundages he lifted without any visible stress.

In between sets he took quite long rests and sat beside me readily expounding his training methods and ideas. Other Soviet lifters may have secret training methods but Yuri answered all my questions and told me many things.

I had the privileve of watching him at three successive sessions and I took full notes of his poundages and repetitions.

His trainer, Bogdasarov, even showed me Yuri’s own training book with its copious entries so I was certain to get the correct figures.

There was obviously a close and harmonious understanding between Vlasov and his trainer whom he consulted before every workout and between exercises. Bogdasarov was as fond of his charge as of his own son. He proudly told me that Vlasov was not a “monster heavyweight” but a “true athlete” with the build of a Hercules.

“He does regular abdominal exercises”, said Bogdasarov, “He is fast and supple and has ran 100 meters (about 109 1/4 yards) in 11.9 seconds after a workout! He can do full splits and touch with his fingers nearly 10 inches below the level of hos toes without bending his legs.”

The smiling and youthful coach then worked out for me from Vlasov’s training notes that at some workouts he had lifted a total of over 23,000 pounds. That is nearly 12 tons!

Let me give you some of the random thoughts on training that Yuri gave me as he sat and rested between his herculean efforts. Some of these were expressed quite freely and some were in answer to my questions.

“What are the main principles behind your training?” I asked.

Vlasov smiled and gave me a terse but meaningful answer.

“The main principles”, he said, “Are to search yourself and to think”.

He then elaborated on this theme. “I do each lifting movement only once in a fortnight (two weeks). Most of my training consists of assistance exercises such as High Pulls, Squats and Incline Bench Presses. I sometimes do sets of 3 or 4 repetitions but mostly 2 or even 1. If I want to put on more bulk I do repetitions and in the Squat I go up as high as 7 reps. But I do not want to get fat, I want only muscular bulk so I do lots of abdominal exercises to keep from being a “fat monster”.

“I do not follow a special training plan nor can I advise you one. I believe that training should be individual. What is good for me may not be good for someone else.

I train according to how I feel. I am satisfied with my technique so I do mostly strength work. For example: my Jerk training is mostly Squats and High Pulls with only a few Jerks from off the Stands.”

With thoughts of Anderson and Hepburn in mind I answered grudgingly; “Yes”.

Having seen Vlasov succeed with a 341 1/2 pound Snatch I conceded that lifting progress could bring about the higher figure.

Again I conceded that lifting progress might eventually find a lifter capable of that feat.

He waited a moment for his figures to sink in then smiled and said; “Not now but in the future perhaps”.

This little exchange served to indicate to me his train of thoughts. He does not want to limit his horizon. He does not want to set up mental blocks about poundages that may hold back his progress. With goals like these before him he will have the incentive to go on striving for more and greater triumphs. Vlasov will not be content just to maintain his present standard even though he is incontestably the world’s strongest man!

Following I have listed the sets and repetitions that I saw him use on three successive training periods; on a Monday, Wednesday and Friday evenings.

One special feature of his training was the Press Up on Parallel Bars. There were no Parallel Bars in the training gym so with the help of the Russian coaches Vlasov rigged up a set on the Squat Stands. His special belt and dumbbells were also missing so Bogdasarov would hang onto his back holding a heavy dumbbell.

These Parallel Bar Dips were not just token press-ups but full length dips doing right down until his shoulders touched the bards then pressing up into the straight arm position. 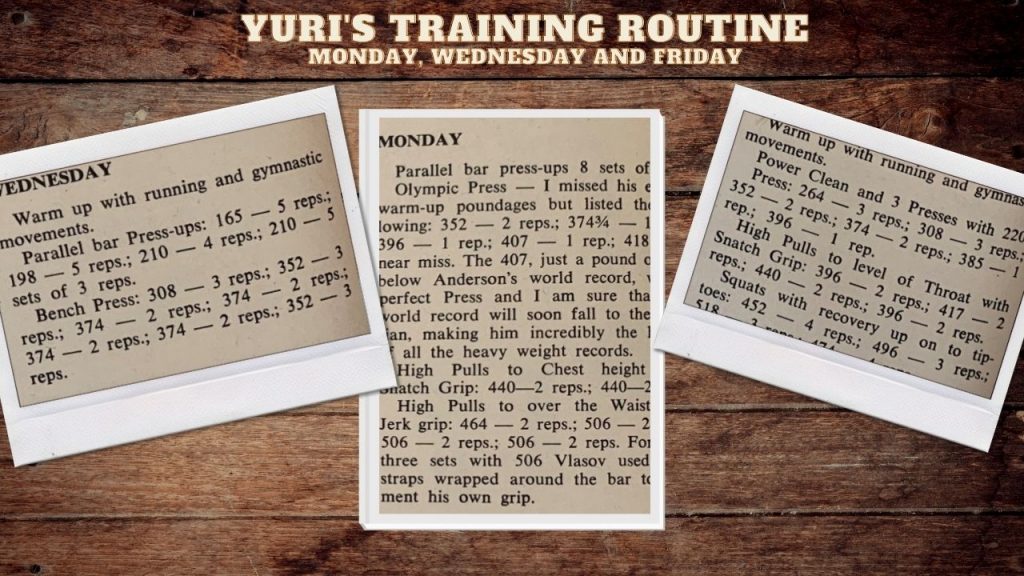 I can assure all you readers that these fantastic figures are quite true and were checked by other open-mouthed specators sitting beside me and also verified by the bulkiny training book of this truly Strongest Man in the World.

At the completion of his last Rome training period he said:

“I may give up lifting soon because I want a career as an engineer. So far all my training and the championship contests have prevented me from finishing my career.

Lifting is not everything.

and I want most of all to be a successful engineer. I am married and have a 10 months old daughter and I am very happy in my family circle. I have quite a good library of about 4,000 volumes so you can see that I do a lot of reading.”