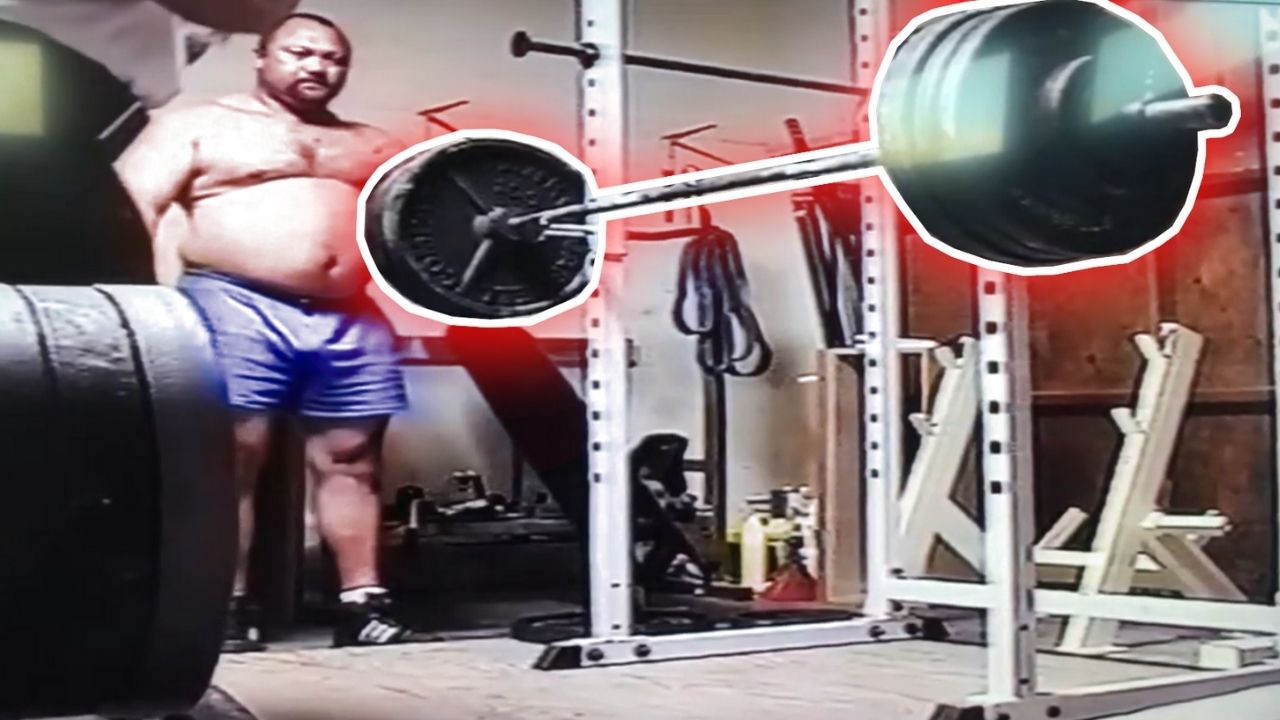 I first learned about the zercher squat from Louie Simmons of the Westside Barbell in Columbus, Ohio. Ed Zercher of Missouri invented this lift. Louie described how this old school lift was done out of necessity by an inmate Robert Barnett, who was incarcerated and therefore had no access to a squat or any type of rack. To build his body, Mr. Barnett would squat down to the bar loaded on the ground and then he would place his bent arms under the bar and squat it off the ground.

Louie Simmons said that for larger lifters who were bulkier and lacked the flexibility to lift the bar off the ground, then a variation would be to take the bar from a power rack while in the crook of your elbows and squat down below parallel. Louie said he had done a best lift of 500lbs in an exhibition in this style. This became my goal!

I found that this exercise made me very strong, if I worked up to a maximum single as a max effort exercise. I was eventually able to work up to a strong 550lb single with a belt that was at parallel and I tried a 585 that I stood up with, but I did not go that deep. The Zercher squat is responsible for my PR squat of 810, 750 conventional deadlift, and all the strongman competition lifts I did with stones over 300 lbs to platforms as well as flipping an 800lb tire.

How I performed the Zercher squat:

I would set a Texas power bar in the J-cups outside the power rack, so that I could squat down and take the bar into to the crooks of my elbow and walk back to clear the rack and take my stance. I would set up wide enough with my feet so that when I squatted down, my elbows would lightly scrape my knees on the inside and I would hit parallel. My goal was always the same, to lower myself under control so that my hips were lower than they would be at the start of my conventional stance deadlift. I would then stand back up and lock the weight out. I experimented with reps up to 5, but nothing got me as strong a heavy ass singles.

I would wear a belt and chalk the inside of my elbows to prevent bar slippage. I never did a Zercher squat to a box, nor did I use bands, chains or pauses when doing this type of squat. This was the beautiful simplicity of this exercise- just focus on squatting as deep and under control as you can- locking out the weight, holding it for a second at lockout and then returning it to the rack.

Zercher squats, what they built on me:
Zercher squats made my abdominal muscles stronger than any exercise I ever trained. They built my posterior chain, with the weight in front of my hips, they stressed my hips and hamstrings- which are hip extenders. I felt that they made my lower back feel better if it was a bit tired or over trained. As important as physical conditioning and strengthening, the mental benefits I got from Zercher squats were just as important to me. As the first man to total 2500, 2600, 2700, 2800, and 2900…Gary Frank always said you had to become “bear wrasslting” strong. He was right! For me, taking a quarter of a ton into my arms and squatting it up and back tightened “my mental screws”, as the late, great Dr. Ken Leistner wrote. Working in law enforcement for over 30 years, I love to be aggressive in the gym and Zercher squats make me feel powerful and required a brutal focus.

Another exercise I found very useful to combine with Zercher squats is pull throughs with a cable. Because I Zercher squatted with a medium width stance, I would do cable pull throughs with my squat stance or a foot width wider. The cable stack I used went up to 400 lbs, but sets with approximately 220 to 280 was great for sets of 10 reps to really build my hamstrings.

Other lifters who I know Zercher squatted more than I did/do:
With the creation of YouTube, I was able to see some great lifters who used the Zercher squat to build strength and power. Strongman legend Nick Best can be seen lifting 705 on the lift! Kevin Oak has a clip of a 605 Zercher squat. Many of today’s MMA and Jiu Jitsu champions, such as Phil Daru can be seen online training and programming the Zercher squat. I do too for the fighters and football players I train.
Give the Zercher your best effort and I know you will be stronger and mentally tougher for excelling at this lift.